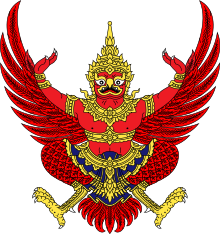 Thailand does not actually have a coat of arms . However, there is a national emblem ( Thai ตรา แผ่นดิน ของ ไทย , pronunciation: [ traː pʰːɛ̀ndin kʰɔ̌ːŋ tʰaj ]) that fulfills the function of the national emblem . It shows a Garuda , a hybrid creature of eagles and humans from Indian mythology and was introduced in 1893 by King Rama V (Chulalongkorn). Before that, from 1873 on, there was only the king's personal coat of arms. Because the country was an absolute monarchy at the time , it also had a quasi state character.

Garuda as the state seal

In 1893, King Chulalongkorn introduced the Garuda , a mythological eagle that appears as a bird of gods in Hindu myths, as a state symbol (Thai: ตรา แผ่นดิน ) . At that time Thailand was still called Siam . A seal with the representation of Garuda was designed by Prince Naris ( เจ้าฟ้า กรม พระยา นริศ รา นุ วัด ติ วงศ์ ) on behalf of the king , but it is in a slightly different form on official communications from the Thai government, notices in the "Royal Gazette" as well as the "Government Gazette" mainly used since 1910.

The Thai Garuda is a hybrid creature with a human torso and an eagle-like head, who wears a golden Thai crown ( Mongkut ). On the Thai seals it shows seven tapered feathers on its right and left wing. The hands on the outstretched human arms are angled upwards, the fingertips point at an angle of 45 ° (or 225 °) to the tip of the crown. He wears a gold necklace around his neck, which is connected with a gold chest band. A kind of apron made of blue cloth is held by a golden belt. The lower body, legs and feet are those of a bird. The nine tail feathers are clearly set apart from each other, they are also pointed.

The upper body and head are white, sometimes red, the feathered parts of the body are usually shown in red.

As a special honor, companies can receive the privilege of displaying the Garuda at their headquarters.

The coat of arms presented by King Rama V (Chulalongkorn) in 1873 was designed by Prince Pravich Chumsai. Rama V, who visited Europe twice, modernized his country and introduced many of the European traditions at court, including the use of coats of arms . It is arranged symmetrically to the central axis. It shows the following individual symbols:

The successor of King Chulalongkorn, King Vajiravudh (Rama VI.) , No longer used this coat of arms with his inauguration. However, Thai police officers still wear it on their headgear.

The regional governments of the Thai provinces ( Changwat ) each have their own seal. See the respective articles:

Commons : Coat of Arms of Thailand  - Collection of images, videos and audio files

Coats of arms and seals of the states of Asia