The Chernivtsi Yuri Fedkovich National University ( Ukrainian: Чернівецький національний університет імені Юрія Федьковича ) is a university in Western Ukraine . It was founded in 1875 as the Franz Joseph University (Francisco-Josephina) in the easternmost crown land of Austria .

The Bukovina was 1774/75 the Habsburg monarchy came. The Austrian government gradually raised the school system. Sufficient schools with German as the language of instruction were created for the German colonists who, along with the Austrian civil servants, formed the leading stratum in the country. The German state high schools in Czernowitz and Suczawa and the Greek-Oriental high school in Czernowitz (also with German as the language of instruction) had been set up as higher education institutions by 1875 . Galicia had German-speaking high schools in Lemberg and Brody ; However, their graduates had to go to universities in the western part of the Danube Monarchy when Polish was introduced as the main language at Lviv University . They were lost to the country for years or forever. So gradually the idea of ​​turning the flourishing Czernowitz into a university town took hold.

The establishment of the university in Chernivtsi was mainly due to the Bukovinian Reichsrat Deputy Constantin Tomaszczuk . He had campaigned for them since 1872. In 1874 the House of Representatives (Austria) passed a resolution to the Imperial and Royal Government at its instigation : "The government is invited to submit proposals for the establishment of a new university in the next session". A large number of cities made claims to the founding of a university, and Tomaszczuk was likely to have done important preparatory work with a brilliant speech for a university in the Bukovina, the city of Chernivtsi. Education Minister Karl von Stremayr did not want to commit immediately. In order to give the matter more force and emphasis, the Bucovin State Committee, dispatched by Tomaszczuk, sent a "Petition from the Administrative Committee of the Society for the Promotion and Dissemination of Scientific Education in Bucovina to Create a German University in Chernivtsi" to the Ministry of Education, which was also distributed in Vienna. In November 1874, the Minister of Education, Emperor Franz Joseph I, submitted the “most submissive lecture on the establishment of a university in Chernivtsi”, which was followed by the Most High Resolution of December 7, 1874. It was already communicated to the House of Representatives at the meeting on December 9th and the proposals to be prepared for the implementation of the same were announced. The introduction itself took place on January 27 and February 3, 1875, whereupon the draft laws were raised to a resolution by the House of Representatives on March 13 and by the House of Lords on March 20, 1875.

With regard to the opening date, the Minister of Education made the following suggestion: “In my most submissive opinion, October 4th would be best suited for this as the day of your Majesty's Most High Named Festival. For the new university will have the good fortune, on Your Majesty, not only to venerate the most gracious sovereign, but also its gracious founder, whose name it will bear for all future. […] This special relationship between the new university and its supreme emperor and lord finds a meaningful expression when the day on which the new Franz Joseph University comes into being is the day on which the peoples of Austria celebrate the name of the beloved ruler ”. Thus, October 4, 1875, after 100 years of belonging to Austria, was set as the opening date.

Constantin Tomaszczuk was appointed the first rector of the new university in 1875. The fact that the Austrian government had opted for Czernowitz was also due to long-term political and strategic considerations: in 1872 the Lviv University was completely Polonized, so that East Cisleithania no longer had a German-speaking university. The multilingual Austrian crown land thus got a predominantly German-speaking university. Germans , Transylvanian Saxons , Jews , Poles , Ukrainians , Ruthenians , Moldovans and Romanians studied at three faculties:

For medicine you had to go to Lviv or to the Jagiellonian University in Krakow . The Faculty of Greek Orthodox Theology was the only one in the whole of Central Europe; Its importance for the formation of a modern Orthodox priesthood was extraordinary not only in Austria-Hungary , but also in Romania and on the Balkan Peninsula for the entire 19th and 20th centuries. Some of their subjects were taught in Romanian and Ruthenian . This also applied to the courses offered by the Chair for Romanian Language and Literature and the Chair for Ruthenian Language and Literature. For the Romanian historian Nicolae Iorga , one of the fathers of Romanian legal nationalism, the FJU was “a German university for the Jews”. A diverse and lively student and corporate life soon flourished in Chernivtsi, which as a cultural and social reflection of the city deserves scientific research. To many contemporaries, however, the city and region, including the university, seemed hopelessly backward and provincial. Mommsen called the university an "kuk penal colony".

During the 44 years of “Francisco-Josephina”, 127 associate and full professors taught at the three faculties . Most of them were provided by the University of Vienna . 14 professors came from Graz, 8 from Prague and 7 from Innsbruck. Ten lecturers and professors from Germany and three from Switzerland followed the call to Austria's “Far East”. 12 private lecturers were appointed to chairs from Chernivtsi itself. 16 professors came from public professional life without having worked at a university. It was a "strange fate" (R. Wagner) that the first and last rectors of the German university - Constantin Tomaszczuk and Basil Tarnawski - were Romanians.

After the dissolution of Austria-Hungary at the end of October 1918, Bucovina was gradually occupied by Romanian troops (see History of Bucovina ) and on November 28, 1918 in the residence of the Greek Orthodox Archbishop of Chernivtsi, Basil von Repta , the Bukovina was annexed to the Kingdom of Romania decided. This was promised to Romania by the Triple Entente as early as 1916 in order to motivate Romania to enter the war against Austria-Hungary (the interests of the Ukrainians in Bukovina were only enforced by the Red Army in 1944/45). After persistent disputes, Greater Romania replaced German with Romanian as the language of instruction . Almost all German-speaking professors then emigrated to German-Austria . The university itself was renamed Universitatea Regele Carol I din Cernăuți . In the years 1920–1922, today's university building was built by the Romanian state.

As temporarily to Russia at the beginning of the First World War , Chernivtsi and the university came to the Soviet Union at the end of June 1940 . Back in Romania from 1941 to 1944, the University of Chernivtsi was then renamed Chernivetskyj derschawnyj uniwersytet . In 1989 it was given its current name after the Bukovinian writer Jurij Fedkowytsch (Юрій Федькович). Belonging to Western Ukraine ( Eastern Galicia ) since 1991 , the university received the rank of National University of Ukraine in 2000 .

The ensemble of buildings of the former residence of the Greek Orthodox Metropolitan has been used by the university as the central campus and administrative headquarters since 1955 . The buildings designed by Josef Hlávka have been a UNESCO World Heritage Site since 2011 .

The Bukovina bordering on Russia and suffered in the First World War under heavy fighting. In the period from September 2, 1914 to December 1917, Chernivtsi was captured six times by Russian troops and won back by the Austro-Hungarian army . The university rectorate was transferred to Vienna under Caesar Pomeranz ; many professors left the city and taught as guests at other universities in Austria-Hungary . The discussion arose as to whether the Franz Joseph University should be relocated to the “more German” west of the empire.

Like the Salzburg university club promoted Kurt Kaser and Hans von Frisch for Salzburg . They pointed to the low level of education in Bukovina; the university produces poorly trained high school teachers and civil servants . In addition, Germanness is on the defensive. In the winter semester of 1913/14, 458 of the 1198 students said they spoke German . Most of them were Jews who felt much less likely to belong to the German ethnic group than in other parts of the monarchy. Eugen Ehrlich was in favor of the move for completely different reasons : The university is preventing young people from turning to economic or technical professions and moving the country forward.

Most professors were against the transfer. Joseph Schumpeter , who returned to Graz in 1911 , Heinrich Singer , who had long since moved to Prague , and - even decades later - the Bukovinian Erich Prokopowitsch all spoke out in favor of the university in Chernivtsi. The German national Raimund Friedrich Kaindl , who was born in Czernowitz, saw a reason to remain in the harassment of the Germans: “The knowledge we imparted is now being used against us as a weapon. The student already thinks he can do without the teacher. Hotspurs want to displace the Germans. ”But it is“ natural that if we fail, other peoples try to take our place in order to break our influence, rush against us ”. And bringing better civil servants and professors into the country is not a solution, because they are not up to the multilingualism of Bukovina. Only a university operating in the country can do that.

The dispute over the relocation remained within the academic framework. He did not reach the university administration and the Imperial and Royal Ministry of Culture and Education . In the background were Salzburg's desire for a university and the realpolitical question of whether a university was needed in the west of the Habsburg monarchy . Gustav Hanausek , who taught in Graz, said no. According to the peace treaty of Brest-Litovsk, the reopening of the Franz Joseph University was planned for the winter semester of 1918, but teaching could already be resumed in June of that year.
On November 22, 1918, at the session of the Provisional National Assembly for German-Austria, the legislative proposal to be implemented on January 1, 1919 to relocate the University of Czernowitz to Salzburg was introduced. 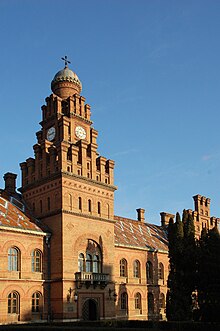 The German-speaking Center Gedankendach , which is funded by the Goethe Institute and consists of the Center for German-Language Studies and the Ukrainian-German cultural society, is also located at the Jurij Fedkowytsch University . 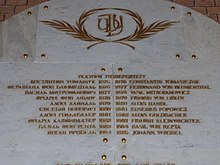 Rectors of the Franz Joseph University in Chernivtsi

Cultural heritage: St. Sophia Cathedral and Lavra Pechersk Pechersk Monastery in Kiev (1990) | Historic Center of Lviv  (1998) | Struve Arch  (2005) | Residence of the Orthodox Metropolitans of Bukovina and Dalmatia (today the central campus of the University in Chernivtsi) (2011) | Ancient city in the Tauride Chersonese and its Chora (2013) | Wooden Churches of the Carpathian Region in Poland and Ukraine  (2013)