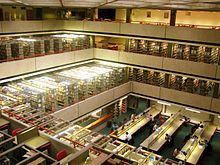 Interior shot of the SOAS library

The SOAS University of London or short SOAS is a British University . The abbreviation stands for School of Oriental and African Studies and refers to the historical origins in the fields of Oriental Studies and African Studies. Formally, SOAS is an independent college that belongs to the University of London . The SOAS was founded in 1916 and is now one of the top 15 universities in Great Britain (best ranking: 4th place ( The Guardian , 2005)).

In 1916 the School of Oriental Studies was founded. In 1917 she started teaching. In 1938 an independent African Department was spun off and it has had its current name ever since. It has been at its current location since 1941. In 1947, the SOAS School of Law, a law faculty, was founded, making it one of the 20 oldest law schools in England. Initially only postgraduate programs were offered, since 1975 other law courses have also been offered. The SOAS library, designed by the architect Sir Denys Lasdun , opened in 1973 and houses more than 1.2 million books. The SOAS continues to be the UK's premier university for courses on Africa , Asia and the Middle East .

There are more than 300 Bachelor and 70 Master programs on offer.