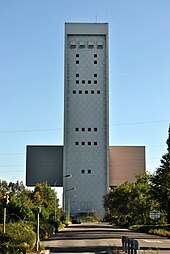 The Rossenray mine was a coal mine in the northern urban area of Kamp-Lintfort .

At the beginning of the 20th century, the company acquired Friedrich Krupp AG in the districts Rossenray , Saalhoff and Rheinberg in the area of today's Urban areas of Kamp-Lintfort and Rheinberg a larger mining claim ownership , namely 39 coal fields and five rock salt fields with an area of coal fields 63 , 5 km 2 . This mine field ownership was divided between the Rheinberg field (39 km 2 ) and the Rossenray field (24.5 km 2 ). The mining law union Rossenray was founded for Rossenray , in whose shares ( Kuxe ) the company Friedrich Krupp owned the majority.

In 1909, the preparatory work for the construction of a double shaft system began. The First World War then brought work to a standstill.

In 1937 Friedrich Krupp AG became the sole owner. In the same year, the preparatory work for the mine was resumed. In 1943 the freezing process for the two shafts began. The end of the Second World War interrupted the work of the devil again. The Rossenray union has been liquidated and deferred .

Despite the incipient coal crisis , the newly founded Krupp successor company Bergwerke Essen-Rossenray AG resumed the work in 1955. The Rossenray mine was designed as a modern connection system.

After a provisional start, the system was to be expanded into a central system with 3 shafts, a power station and a coking plant . Shafts 1 and 2 should have equal rights and the additional shaft 3 to be sunk should take over the cable car and material transport.

In the early 1960s, shafts 1 and 2 reached their final depths . In 1963, shaft 2 with a small conveyor system and a provisional preparation went into operation, shaft 1 was only kept open.

On February 16, 1966, a firedamp explosion occurred in the Rossenray construction site, killing 16 miners .

On November 27, 1968, the Rossenray mine was incorporated into the newly founded Ruhrkohle AG . From 1969 the plant with the Pattberg mine was run as a works management.

The annual production at that time was 950,000 tons of coal.

Ruhrkohle AG decided to expand the Rossenray mine as a connection system, but in a smaller version than originally planned. 1968 manhole 1 was tiefergeteuft and 1100 m, a fourth sole attached. In 1970, shaft 1 was equipped with a new type of vessel conveyor . The concrete conveyor tower erected for this purpose should contain the processing systems in a separate extension . The resulting cross-shaped building became a characteristic landmark. The identical tower planned for shaft 2 was not built, the smaller conveyor system with a box-profile strut frame remained in operation. Furthermore, the planning of shaft 3 and the coal recycling plants were shelved. In 1971, the Pattberg / Rossenray plant departments and the Rheinpreußen 5/9 mine were merged to form the Rhineland composite mine . The Rossenray mine continued to take over the ropeway , material and mountain transport for this system.

In 2003 the so-called “AVSA 02” was put into operation on Rossenray. The "AVSA" was one, especially for the DSK developed, tunneling machine the Austrian Voest Alpine mining technology and the University of Leoben , which at Prosper-Haniel was in use. The patent holders of the German patent DE 19623653 were Voest Alpine Bergtechnik and DSK. The inventors were Matthias Roesch, Alfred Zitz, Karl Lerchbaum and Otto Krassnitzer. The "AVSA 01" was in use at the Friedrich Heinrich mine. The “AVSA 02” defined itself as the successor machine thanks to an even higher degree of automation and the maximum advance height of 8.20 m. The special characteristics of this machine were to intersect at the same time and anchor could ( A lternatives V ortriebssystem S chneiden and A n core) and thus the speed of development of the routes could be increased.

On May 1, 2011, the Rossenray colliery had ceased operations above ground. Most of the employees worked in the West Mine , formerly Friedrich-Heinrich , until the end of 2012 . Due to the discontinuation of subsidized hard coal mining in Germany, coal production there ended with the last production shift on December 21, 2012. Coal mining is now a thing of the past on the Lower Rhine. In 2018, the headframe of shaft 2 was demolished. The demolition of the Rossenray 1 headframe began on October 7, 2019.

Commons : Rossenray mine  - collection of images, videos and audio files