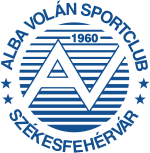 Hydro Fehérvár AV19 is a Hungarian ice hockey club in Székesfehérvár , which was founded in 1960 as Budapesti Volan SC . So far, the Hungarian championship has been won 13 times . Before the 2007/08 season , the club applied for a license for the Erste Bank Eishockey Liga and was accepted. Fehérvár AV19 has been participating in the EBEL since 2007, but continues to play with a second team in the Hungarian league and the international first league .

After the team was only to be found in the midfield of the Hungarian teams for a long time, they rose to the top teams in the nation around the turn of the millennium. This culminated in the serial championship titles of the Hungarian league, which finally persuaded the club to apply for membership in the stronger Austrian league. This was also done against the background of being able to better introduce the players of the national team to the A-group level. Although Alba Volán still had to learn the hard way in the first EBEL season and ended up in last place, the Hungarian national team managed to climb back to the top international league after seventy years at the 2008 Ice Hockey World Championship .

In the 2008/09 season Alba Volán started with a surprising winning streak and was able to place in the middle of the table at the beginning of the championship. On matchday 21, however, the home game against EC Red Bull Salzburg turned into a tough battle. The team did not recover from the long suspensions imposed by the criminal senate afterwards due to the decimated squad and the high wear and tear, so this time the season ended in penultimate place.

The death of Gábor Ocskay , who had been one of the team's leading players and one of the most popular personalities on the team for years , caused a shock just after the end of the season . In his honor, the club renamed itself to Alba Volán 19 in reference to his shirt number . In the summer of 2009 the team was strengthened in many key positions, and it was also possible to sign more good local players and more experienced legionnaires. The continuous build-up bore its first fruits in the 2009/10 season , in which the team reached the EBEL playoffs for the first time and finished the preliminary round in seventh place. In the quarterfinals, however, there was an early break against the Vienna Capitals , but the first game on Vienna's ice could be won.

In 2009 the club was renamed Sapa Fehérvár AV19 after the main sponsor Sapa Profiles Kft Hungary , the Hungarian branch of a Swedish aluminum company .

Since 2004, the team has also regularly participated in the IIHF Continental Cup . The team has been there to host the final tournaments since 2005, but has only been able to achieve a win in 2004/05 . The victory over HC Milano Vipers brought third place in the tournament.

The Ifjabb Ocskay Gábor Jégcsarnok was created in 1991 through the roof over the open ice. In 2002 the hall was rebuilt again and expanded to a capacity of 3,500 spectators, including 1,000 seats.

In addition to the changing rooms, the ice rink contains a fan article shop, a fan bar, a separate, secure guest area and also meets other standards of a modern arena. Dis-stadium hosted the IIHF - World Cup 2002 the Division 1 , the final tournament of the IIHF Continental Cup in 2005 , 2006 and 2007 , and has hosted several international tournaments and friendly matches.

In addition to various youth teams, the club also has a team that participates in the Hungarian league and the international MOL league. If the game plan allows, the players of the EBEL team join this team after the end of the EBEL season.

Team membership and position in brackets

Clubs and seasons of the Austrian Ice Hockey League