This article covers the commune in France. For the American actor see Gary Dourdan , for the Breton community see Dourdain .

Dourdan is a French municipality with 10,806 inhabitants (at January 1, 2017) in the department of Essonne and the region Ile-de-France . The place belongs to the arrondissement Étampes and is the administrative seat of the canton of Dourdan . Dourdan is located in the far west of the Essonne department on the banks of the Orge .

The place name is derived from the Celtic word for water or river. The place developed into the most important center of ceramic production in Gallo-Roman times .

Dourdan was the residence of the Robertin Hugo the Great , the father of Hugo Capet , who also died here in 956. When Hugo Capet became King of France in 987 , Dourdan became part of the Domaine royal .

In 1220, King Philip II of August had a new castle built in Dourdan, which in later years was given as an apanage . The best-known owners were Blanka of Castile , Ludwig of Évreux , Johann von Berry , François, 2nd Duke of Guise , Maximilien de Béthune, duc de Sully , Anna of Austria and the family of the Dukes of Orléans .

The town hall and the François Mitterrand park 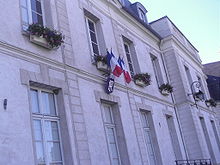 Construction of the church began in 1150, but it was not completed until the 14th century. The building suffered severe damage in 1428 and was restored at the end of the 15th century. The church was damaged again during the Huguenot Wars . In 1641 the spiers were built and in 1689 the Chapelle de la Vierge, which increased the church by 14 meters. H. extended from 36 to 50 meters.

There are a number of attractions inside the church, including:

It dates from 1836 and is located in the city center. It replaced the old market hall from the 13th century, which had an upper floor where civil and judicial negotiations took place, including the forest (see below); it was the auditoire royal , the royal hearing that was moved to the castle in the 18th century. With the upper floor of the new market hall, a work by the architect Lucien-Tirte van Clemputte, one wanted to remember the old one.

The Forêt domaniale is a former royal hunting forest that passed into municipal hands in 1870 . It is 1683 hectares and consists of two forests separated by the Orge:

The forest is a deciduous forest that consists of 80% oak , and chestnut , beech , hornbeam , birch and 6% pine .

The Abbey of Ouÿe (Abbaye de l'Ouÿe) was built in 1163 at the request of King Louis VII by Grammontese monks. The king wanted to thank God with this abbey because he had allowed him to hear the voices of his companions (ouïr) after getting lost in the forest. The abbey is in the south of the forest. Around 1220, Philipp August canceled the donation that Ludwig VII had made to the monks, as the abbey was an enclave in his preferred hunting ground. A century later, however, Louis the Saint restored the previous state. The monastery was devastated several times, especially in 1567 during the Huguenot Wars.

In 1771 the order of Grandmont was dissolved and the Benedictines from Clairefontaine-en-Yvelines took over the monastery in 1773. In 1790, during the French Revolution, the monks were expelled and their property was confiscated. The abbey was then largely destroyed. The Ursuline nuns from Orléans have used the monastery since 1946 .

Only a few testimonies of the past have survived, such as a chapel and another building that cannot be visited. They belong to the municipality of Les Granges-le-Roi .

Commons : Dourdan  - collection of images, videos and audio files
Communes in the Arrondissement of Étampes