The 1976 Winter Olympics took place in Innsbruck . The ice hockey games were played in the Olympic and Exhibition Hall from February 2 to 14 . Twelve teams took part in this tournament.

The six teams of the A group of the Ice Hockey World Championship 1975 as well as the best four teams of the B group and the winner of the C group were eligible to participate . Austria was also the host. However, with Sweden (A-group third), the GDR (B-group winner) and Norway (C-group winner), three eligible teams waived their participation. Romania (B group fifth), Japan (B group sixth) and Bulgaria (C group second) moved up for these teams.

Like the previous Olympic tournaments, the tournament started with an elimination round. The pairings were compiled using a seeding list based on the placements at the 1975 World Cup .

The sovereign tournament winner was the USSR, which won its fifth gold medal, ahead of Czechoslovakia. The sensational winner of the bronze medal was the BR Germany, which was successful due to the better goal quotient in the direct comparisons against the teams from Finland and the USA with the same points. Winning the bronze medal was the best placement of a German team at an Olympic tournament until the 2018 Winter Olympics.

The tournament was overshadowed by a doping case. The Czechoslovak player František Pospíšil was convicted of taking the substance codeine on the index after the game against Poland. The game was rated for the Czechoslovak team with 0: 2 points and 0: 1 goals. For opponents Poland, however, the actual final result of 1: 7 still applied.

1 ) Final score 7: 1, due to a positive doping result from a Czechoslovakian with 0: 2 points and 0: 1 goals against Czechoslovakia. Poland was not awarded any points.

Placement round for places 7–12 (B group)

Final placement and squad of the teams 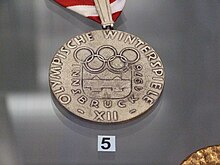 Sports at the 1976 Winter Olympics