Sorau is a redirect to this article. Sohrau is the German name of the city Żory .

Żary [ ˈʒarɨ ] ( German  Sorau , Lower Sorbian Žarow ) is a city in the Polish Lubusz voivodeship ; it is the administrative seat of the powiat Żary .

With almost 40,000 inhabitants, Żary is the second largest city in Lower Lusatia after Cottbus and is generally considered the center of its Polish part. The city is completely surrounded by the rural community of the same name Żary , which has its administrative seat in the city.

Sorau southeast of Guben and Sommerfeld on a map from 1905

The city is located in Niederlausitz between the Oder tributaries Bober (Bóbr) and Lubsza (Lubst / Lubis) at an altitude of 160 m above sea level, about 85 kilometers south-southeast of Frankfurt on the Oder . 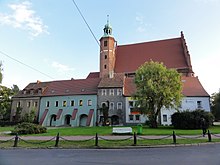 For the year 1007 a Gau (area) Zara was first mentioned in the chronicle of Thietmar von Merseburg , who was under the rule of Duke Bolesław Chrobry of Poland .

In 1260 Sorau received city ​​rights under Magdeburg law under the Wettins . It is therefore the oldest town in Lower Lusatia . Albrecht von Dewin was Lord von Sorau . In 1274 he probably founded a Franciscan monastery . In 1280 Ulrich von Pack took over the reign of the city and rule of Sorau . In the following years the castle was expanded, a city wall was built, the church was expanded and a hospital for the Holy Spirit was built. Sorau became one of the most important cities in Lower Lusatia. A penny with a stag's head as a coat of arms testifies to its own right to mint at this time.

In 1355 the rule passed to the von Bieberstein family . Since 1364 the area belonged to the Kingdom of Bohemia . In 1424 a fire destroyed parts of the city.

Between 1525 and 1540 the Reformation was gradually introduced in Sorau . Since then, church services have been held in the Lower Sorbian language in the St. Anna Chapel , and the Franciscan monastery has been closed. In 1549 the monastery buildings burned down. Since 1558 the town and rule of Sorau were ruled by the Lords of Promnitz . At the end of the 16th century a separate Protestant consistory was created.

Another city fire raged in 1619. In the Thirty Years War Sorau suffered from the raids of Wallenstein's and Swedes' troops . With Niederlausitz, Sorau came under the rule of the Electorate of Saxony in 1635 . In the years from 1705 to 1708 Georg Philipp Telemann was Kapellmeister at the court of Count Erdmann II. Von Promnitz . In 1755, the town and rulership of Sorau were sold to the kings of Saxony and incorporated into the Guben district .

From ancient times there was a civil rifle guild with a rifle house. In 1402 these riflemen took part in an attack on Beeskow under Johann von Biberstein. In 1415 there was the first privilege, in 1478 a second. Since 1797 two companies ("Jäger") split up, their uniforms were green. Even the Prussian King Friedrich Wilhelm IV. Inspected the guild with its ancient crossbows with steel bows and bolts in 1844. Finally the bolts shot at a target about 29 m high, a wooden eagle on a pole. Shooting is popularly called bird shooting . The riflemen who lived in the Federal Republic of Germany after 1945 re-founded the Armbrustschützengilde in 1959. The Sorauer forester Hermann Gerner, their honorary president, acted as federal referee.

In 1815 Sorau came with Lower Lusatia to the Kingdom of Prussia , in 1816 it became the center of the Sorau district . In the 19th century the city became an important location for the textile industry. Almost 50% of all industrial workers were employed in this trade. Due to the cultivation of linen in the nearby Lusatian and Silesian regions, a textile college was founded in 1886, with the focus on bast fibers .

From 1858 the gasworks provided lighting and energy. The first high-pressure drinking water pipeline was laid around 1870. In 1896 the Sorau - Christianstadt - Grünberg railway was put into operation.

In 1938 a " Kaiser Wilhelm Institute for Bast fiber research" was established, which is to be seen in connection with the self-sufficiency efforts of the Third Reich. This institute was later relocated to Mährisch-Schönberg .

In 1939 the municipality of Seifersdorf , bordering on the southwest of Sorau, was incorporated. According to the last German census in 1939, 19,226 inhabitants lived in Sorau. During the Second World War , parts of the Focke-Wulf aircraft factory were outsourced to Sorau.

In April 1944, on "Black Tuesday", April 11, 1944, at 11:30 am, the city was bombed by parts of the American 8th Air Force (108 bombers). The aim of this bombing raid was to destroy the Focke-Wulf fighter aircraft factory in Sorau. This mission was carried out by the 303rd Bombardment Group (Heavy) with 33 B17 bombers. 239 pieces of 500 pound M17 cluster munitions of 38 2 kg incendiary bombs each and 478 pieces of 100 pound M30 high explosive bombs were dropped. On that day, the 8th US Air Force flew numerous attacks against Junkers and Focke-Wulf aircraft factories in Sorau, Cottbus, Stettin, Arnimswalde, Oschersleben, Bernberg, Politz and Rostock with 880 bombers. Antiaircraft fire destroyed 78 US machines.

Part of the old town development was destroyed by this air raid. In February 1945 the Red Army troops reached the city. This was preceded by a general wave of refugees from the German population and parts of the Wehrmacht (the thunder of the Soviet artillery guns could be heard in the city on February 13, 1945).

During the Second World War, in March / April 1945, the Red Army placed the eastern Lower Lusatia and thus also Sorau under the administration of the People's Republic of Poland . The local German population was subsequently expelled by the Polish authorities .

On January 1, 1973, Kunice (Kunzendorf) , located southeast of the city, was incorporated. At the same time, the rural community Żary was formed from various gromadas .

Description : On the embroidered coat of arms a blue shield with the golden majuscule W. In the first silver field a red stag facing to the left and opposite a silver dog with a gold collar in black . In the golden field at the top at the top a five-ended red deer pole with a grind. Lower right in red a silver arrow slanted to the right accompanied by two six-pointed silver stars . The coat of arms is explained by:

Żary is considered the largest economic and cultural center in the southern part of the Lubusz Voivodeship (Lubuskie). The city's economy is characterized by small and medium-sized businesses. There are companies in the wood, glass, electrical, automotive, metal and building materials industries. Tourism also plays a certain role. The unemployment rate is 8 percent.

The state roads DK 12 and DK 27 and the A18 motorway , which connects the city with the German-Polish border ( federal motorway 15 in the direction of Forst (Lausitz) and Cottbus ) and the southern Polish motorway A4 ( to Liegnitz and Breslau ) connects.

Żary station is on the Łódź Kaliska – Tuplice and Miłkowice – Jasień lines . It is served by regional trains Forst (Lausitz) - Żagań , among others .

From 1888 to 1945 there was a coffee service and tableware producing porcelain factory in Sorau . The hand-painted tableware, mostly with a gold rim, was exported to Europe and overseas. The Elmshorn merchant Christian Carstens acquired the porcelain factory in 1919 and led it to the peak of its production figures with the factory brand “Sorau Carstens Porcelain” with a crown and a laurel wreath. In the 1950s, the Sorau patterns and decors were still considered modern and were produced in the GDR by the VEB in Reichenbach and Blankenhain .

The Sorauer Heide extends southwest of Sorau. Hege and hunting was carried out by the city's magistrate until 1945. A forest avenue with the memorial oak to the Forester's Heidehaus was created especially for this purpose . The fisheries administration was attached to the forest administration. The city leased a 5.37 km² hunting area and 8 ponds (22,500 m²). A special feature was that the city district forester and forest ranger Hermann Gerner (1925 to 1945), as the successor to forester Jerichow and Augustiniak, was also a fisherman on seven carp ponds and the horse pond lying one behind the other. On the Heidehaus site, it was common to sell both game and farmed fish from a tank. Another novelty in Sorau was the stalking accompaniment of the hunter H. Gerner by a tame badger , next to a hunting dog. Today (2015) there are also the large fish ponds of the Nymphenteich, the Kleine u. Great width and the Moselle pond broke and are only flown through by the Schoberbach, which once also fed the Sorauer bathing establishment on the Schoberteich, with the restaurant "Hermanns Bleiche".

Fish ponds in the Sorau city forest before 1945

The seven fish ponds in the Schoberbachtal are strung together like a string of pearls and have been leased for use. The Schoberbach first flows through the Schoberteich from west to east. All ponds could be regulated with adjustable weirs. The water level in the Schoberteich provided a sufficient level in the bathing establishment at the Hermanns-Bleiche excursion restaurant. The next one, the nymph pond, is the third of the fish farming ponds. Great width and the Moselle pond. To the left and right of the ponds, there are forest and walking paths up to the seventh, the Marsdorfer pond, which was able to regulate the water for the nearest former upper watermill. Behind Marsdorf, the Sore flows into the Schoberbach from the left. The fish population in the ponds was 17350 carp, 7500 tench and 15 breeding carp.

Town hall on the ring

Remains of the medieval city fortifications

Despite the massive damage caused by the war, many historical buildings and the medieval city complex have been preserved in Sorau:

During the existence of the GDR , especially after visa-free traffic, companies in Lower Lusatia - especially the textile sector - maintained relationships with one another. Summer camps for children and adults were exchanged, cultural performances were invited and experiences were exchanged in all areas. At friendship meetings, the Polish side repeatedly acknowledged that the GDR was the first German-speaking country to recognize Poland's new western border under international law. Since the fall of the Wall, Żary has had a friendly relationship with the German city of Weißwasser, which was roughly the same size at the time . In June 1997, the two cities about 45 kilometers away sealed this friendship with a partnership agreement. After the re-establishment of the counties in Poland, this partnership was extended to the county level.

In 2004 the city signed a partnership agreement with the French city of Longuyon . With the accession to the Spree-Neisse-Bober Euroregion, friendly relations with the Brandenburg medium- sized towns of Forst (Lausitz) and Spremberg have developed in the German-Polish border area .

Parishes in the powiat Żarski