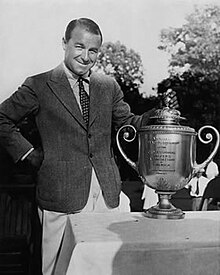 Gene Sarazen (born Eugenio Saraceni ; born February 27, 1902 in Harrison , New York , † May 13, 1999 in Naples , Florida ) was a legendary American professional golfer . He is one of the few golfers who were able to achieve a career Grand Slam , i.e. who have won all four majors in the course of their careers.

In 1935 he succeeded at the Masters " The shot heard 'round the world ". It was in the final round on the 15th hole, a par 5, where Sarazen was able to pocket his second shot with a 4-wood from about 200 meters. This albatross finally helped him into the playoff against Craig Wood, which Saracen finished victorious.

Gene Sarazen designed the modern Sand Wedge in 1930 and called it sand iron at the time .

After finishing his career and until 1999, shortly before his death, he made the honor tee at the Masters at Augusta National Golf Club together with two other golf legends, Sam Snead and Byron Nelson .

Major championships are in bold .

The Bob Jones Award has been presented annually since 1955 in recognition of outstanding athleticism in keeping with the “spirit of Bobby Jones”.