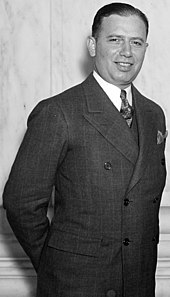 In 1899, William Citron came to Middletown , Middlesex County with his parents . There he attended public schools and then until 1918 Wesleyan University . In the last phase of the First World War Citron became a lieutenant in the field artillery in September 1918. However, because of the armistice in November of the same year, he was no longer active at the front and left the US Army on December 14, 1918 . After a subsequent law degree at Harvard University's law school and his admission to the bar in 1922, he began to practice in Middletown in his new profession.

Citron was elected to the US House of Representatives in Washington, DC in the 1934 congressional election, held for Connecticut's sixth term . There he took over on January 3, 1935, succeeding Republican Charles Montague Bakewell . After a re-election in 1936, he was able to complete two terms in Congress by January 3, 1939, during which many of the federal government's New Deal laws were passed. In the elections of 1938 Citron was defeated by the Republican BJ Monkiewicz . Between 1940 and 1942 he was chairman of the Connecticut Housing Authority . During the Second World War Citron was deployed between 1942 and 1944, first as a captain and then as a major in the military police in North Africa. In March 1944 he had to quit military service for health reasons; after that he worked as a lawyer again.

Between 1948 and 1949 Citron served on a commission in Connecticut that dealt with the reintegration of war veterans into working life. From 1947 to 1948 he was also chairman of the Connecticut War Invalids Association. In 1952, he applied unsuccessfully to return to Congress. After that, he no longer appeared politically. He died in Titusville in June 1976 and was buried in his hometown of Middletown.

Members of the United States House of Representatives for Connecticut