This article is about an automobile model; for the novel of the same name, see The Hitchhiker's Guide to the Galaxy .

Ford Prefect was a model of passenger car produced by Ford in the United Kingdom . The vehicles were introduced in 1938 and manufactured in Dagenham , Essex .

The original Ford Prefect was a revision of the Ford Model 7W and also the first Ford not designed in Detroit , Michigan . It was specially made for the UK market. This model of the Prefect was produced with a few small changes from 1939 to 1953, the original model E93A from 1939 to 1941 and, after a war-related interruption of production, from 1945 to 1948 and the slightly modernized model E493A from 1949 to 1953.

In September 1953, a completely redesigned small Ford with a modern pontoon body was presented, some of which were manufactured until 1959. They were the types Ford Anglia (two-door) and Ford Prefect (four-door), both model 100E . A cheap version was the Ford Popular Model 103E . From 1955 there was also a station wagon which was offered with the equipment of the Prefect 100E as a Ford Squire until 1959 and with the equipment of the Anglia as a Ford Escort . 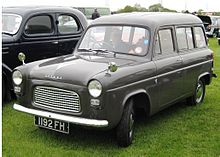 In addition to the UK, Ford Prefects were sold in Australia , Canada and Sweden . The Canadian model was specially adapted for left-hand drive.