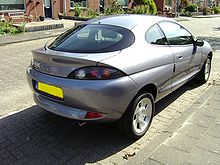 The Ford Puma was a small sports coupé that was developed and built by Ford-Werke GmbH in Cologne . The Puma is technically based on the Ford Fiesta of the fourth series and was produced from March 1997 to December 2001.

Since the platform of the Puma was derived from the Fiesta that was manufactured in parallel, it could largely be built on the same production lines at the Ford plant in Cologne. Only in the body shop were there separate production lines that used manual processes. For example, the doors were largely made and assembled by hand. In the production of the Puma, the proportion of manual work was around 40 percent. It was built in a number of up to 220 units per day.

The trademark rights to the name Puma acquired Ford in 1995 by the Brazilian sports car manufacturer Puma .

The standard engine consisted exclusively of inline four-cylinder gasoline engines from the Zetec S series. It ranged from the 1.4-liter engine with 66 kW (90 hp) built in early 1998 to autumn 2000, through the 1.6-liter engine, which replaced the 1.4-liter, and until the model was discontinued in December 2001 was installed, with 76 kW (103 PS) up to the 1.7-liter engine with 92 kW (125 PS), which was available over the entire construction period of the Puma. The Ford Racing Puma with a displacement of 1.7 liters and an output of 114 kW (155 hp) was offered in a limited number of 500 units . These are all right hand drive vehicles that were only available in the UK.

The new 1.7 liter engine was installed exclusively in the Puma. This engine was the first European Ford engine with variable camshaft timing .

From 1999 to 2002, the Ford Puma Cup was the one-make cup and thus the motorsport flagship of Ford, replacing the Ford Escort Cup . The races were driven as part of the Beru TOP 10 , lasted 25 minutes plus one lap and started with an Indianapolis start . There were points for the 15 best placed drivers, additional points were given for the pole position and the fastest race lap. Vehicles from the Puma Cup special series, which were built at the Ford plant in Cologne in 1999 and 2000, were driven, and a Ford dealer had to be named as a godfather for each vehicle.

The 1.7-liter engine, which was modified by ACS on behalf of Ford, served as the basis. The engine had to do without the variable camshaft control of the intake camshaft. Instead, sharper camshafts and a larger throttle valve were used, the map was adapted and the maximum speed increased to 7200 min −1 and the intake significantly changed. The exhaust system was also specially developed and built by Remus. It contained an exhaust manifold , a regulated metal catalytic converter and an exhaust system diameter designed for group N. In the Cup-Trim the car reached according to Ford characterized a power output of approximately 107 kW (145 hp), the maximum torque of 160 Nm at was 5300 min -1 at.

The chassis consisted of racing springs from Eibach , racing shock absorbers from Bilstein, reinforced wheel bearings at the rear and reinforced wheel hubs at the front and rear. Power was transmitted via a single -disc racing clutch from Sachs . The brake system was revised, brake discs from the Mondeo V6 were installed on the front axle and the Escort RS 2000 on the rear axle , and a larger master brake cylinder and brake booster were installed. For weight reasons, ABS was not used in the cup vehicles, as was power steering. In order to be able to make pit stops faster, the vehicles had an air lift system, which was used for the first time in national popular sport. After connecting a pressure hose, three rams automatically ran out from under the vehicle, lifting the vehicle. In addition to a welded roll cage, a 4-point seat belt, a Recaro racing bucket seat with a side headrest and a fire extinguishing system were installed in the interior. Subsequent changes to the vehicles were not permitted.

Although the Ford Puma Cup was originally only intended to be held over three seasons, Ford decided to host a fourth season in 2002 due to the continued high demand and high acceptance in motorsport circles. A total of 52 racing vehicles were built, which were offered at a price of 39,950 DM.

The first master of the one-make cup in 1999 was Thomas Marschall in the Panhuis team from Meerbusch-Osterath near Krefeld , the last was Dirk Werner in the same team.

In a commercial, actor Steve McQueen, who died in 1980, was seen driving the Ford Puma. The scenes are from the 1968 film Bullitt , in which Steve McQueen drove a 1968 Ford Mustang GT 390 Fastback .