The Ford Cortina was produced from 1962 to 1982 by the British Ford works in Dagenham as a two- and four-door sedan in the middle class and as a station wagon. The individual series of the Ford Cortina were: 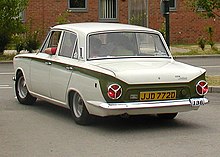 The engine of the Cortina Lotus

The first Cortina was presented on September 21, 1962 and was produced in England until 1966, in some other countries until 1967.

The Cortina was added to the model range and placed between the Ford Anglia and the Ford Consul Classic . It was developed under the project name “Archbishop” - an allusion to the “Cardinal” project that culminated in the German Taunus 12M . The Cortina was built simply and efficiently and immediately became a great sales success. While the Ford 12M was developed in the American engineering center, the Cortina was a British development and was also available in a four-door version. Compared to the Ford Anglia 105E, a considerable increase in space was achieved with only 50 kg more weight.

The Cortina was powered by the Kent engines known from the Anglia, with a displacement of 1.2 and 1.5 liters and a side camshaft. The 1.5-liter engine had a crankshaft with five bearings and was available as a "GT" with 25% more power, with a Weber carburetor, modified exhaust and cylinder head. The easy-to-shift four-speed gearbox was fully synchronized. With the 12-volt electrical system and the front disc brakes, also in the 1200 Deluxe from 1965, Ford equipped cars of this class with such safety features early on. Ultimately, decisive for the great sales success of this series was probably the spacious five-seater body designed by Roy Brown Jr. with a large trunk and a pleasing exterior.

The most famous version was the Cortina Lotus. Ford had commissioned Colin Chapman , owner of Lotus Cars , to build a Cortina for motorsport. The engine of the Cortina Lotus had a light alloy cylinder head with two overhead camshafts designed by Harry Mundy on the block of the normal Kent engine. This engine was also used in the Lotus 23 , Lotus Seven and Lotus Elan . The outer skin of the doors and hoods of the Cortina Lotus are made of aluminum instead of steel. The chassis of the Lotus Cortina has also been modified. While the rear axle of the series models was attached to leaf springs, the Lotus Cortina had a better guided rear axle with trailing arms, a reaction triangle (triangular link) hinged to the bottom of the differential housing and coil springs. In addition, the differential housing was made of aluminum in order to reduce the unsprung mass of the rigid rear axle. The axle tubes were still made of steel. This construction turned out to be the weak point of the Lotus Cortina, as the aluminum housing of the differential was not sufficiently rigid and this resulted in numerous differential defects, especially in sports use. For this reason, during the "active" time of this sports model, most of the specimens were upgraded to the rear axle of the normal models, which caused fewer problems.

The second generation of the Cortina appeared on October 18, 1966, four years after the original Cortina. This was accompanied by advertising under the motto “New Cortina is more Cortina” - “The new Cortina is more Cortina”. Although the car was slightly shorter than before at 430 cm in length, it was more spacious because it was 6.4 cm wider and had more arched side panels. The body shape was designed by Roy Haynes. The type of drive and chassis remained the same. The turning circle was smaller, the suspension softer and the brakes and clutch adjusted automatically. For some markets, including Great Britain, there were new, smaller engines with 1300 cc displacement and five-bearing crankshafts. There was also a Lotus version of the MK II with an engine with two overhead camshafts.

For certain markets in which the 1300 cc engine was taxed higher, a stripped-down version with the 1.2-liter engine of the Ford Anglia Super was also available. The 1500 cc engines were initially only revised, in 1967 they received a new cross-flow cylinder head and the displacement was increased to 1600 cc. The engine of the Lotus Cortina was initially continued to be built.

In 1967 the Cortina was Britain's most popular new car - a goal Ford had been trying to achieve since the first Cortina in 1960.

Two-door and four-door sedans were offered, with basic equipment, as deluxe, super, GT and from the end of 1967 as the 1600E, although not in all body styles and engines. A few months after the introduction of the sedans, there was a four-door station wagon with a large tailgate from February 15, 1967.

The better equipped Cortina 1600E was introduced at the Paris Motor Show in October 1967, one year after the Cortina Mark II. Like the Lotus Cortina, it was a little lower and had the more powerful GT 1600 Kent engine and luxury equipment: dashboard and door trim set were adorned with burr walnut veneer, plus there were bucket seats, sports steering wheel and additional display instruments, fog lights and chrome-plated Rostyle wheels. The grille and rear were painted black.

Ford New Zealand developed its own variant of this model called the GTE.

The Cortinas were hardly changed for 1969: They got the lettering "FORD" on the bonnet and trunk lid, the radiator grille went black and there were chrome strips above and below the taillights across the entire width of the rear end panel.

A variant with the three-liter Essex V6 engine was privately developed in South Africa by Basil Green Motors and sold by the Grosvenor Ford dealer network as the Cortina Perana; a similar model later appeared in the UK and became known as the Cortina Savage. The Savage was available with 1600E equipment in all three body styles, while the South African vehicles were only offered as a 4-door sedan - initially with GT and later E equipment. 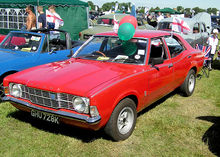 In 1970 the last stand-alone version of the Cortina was presented. In the meantime it shared a common platform with the Taunus (hence "TC"), but the body shape (coupé-like, " Coke-Bottle-Line ") differed from that of the Taunus. Like the Taunus TC, the Cortina had the distinctive Knudsen nose .

With the revision of 1976 there were no longer any differences between Taunus and Cortina; the independent English form was given up in favor of the German one. 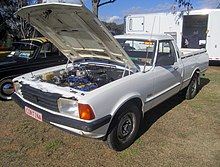 In 1971 a pickup was produced in South Africa based on the 2-door Cortina MK III sedan . This Ford P100 was also optionally available with a GRP hood over the platform. The engines used were the 1.6-liter V6 engines known from the Cortina / Taunus and the 2.5-liter and 3.0-liter Essex V6 engines known from the Ford Granada . These were also available with automatic transmissions . In 1977 the body was changed parallel to the Cortina MkIV, as well as in 1980 to the Cortina MkV. Only when the Cortina and its sister model Taunus had been discontinued in Europe did Ford begin exporting the P100 from South Africa to Europe in 1982. For Europe, however, the chassis was lengthened and the payload increased to 1000 kg. After Ford decided to withdraw from South Africa, production stopped in 1987. In the same year, a new model based on the Ford Sierra appeared in Europe , which has now been built in Portugal .

Hyundai from South Korea - which at that time did not yet manufacture its own car models - started assembling the Cortina for the local market in 1969. By 1971 a total of 9,290 Cortina had been assembled from prefabricated parts, most of which came from Europe. At first, only around a quarter of the parts were built domestically. The so-called local content had to be steadily increased according to government regulations, which is why Hyundai was no longer just a fitter, but a producer of the Cortina in the following years. In addition, Hyundai had taken over the distribution and adaptation to the Korean market of the German Ford 20m and the American Ford Mustang for South Korea. This made Ford (temporarily) the market leader in the Korean market. The Cortina was translated as the Ford Koti in South Korea . It was especially used as a taxi. After the end of production in Europe, it was produced until the end of 1982 and then Hyundai replaced the Cortina with a self-developed model based on the Cortina, the Hyundai Stellar .