Primož Roglič (born October 29, 1989 in Zagorje ) is a former Slovenian ski jumper and current cyclist . His greatest successes to date have been the overall victories at the Vuelta a España in 2019 and 2020 .

Roglič, who started ski jumping at the age of eight, made his international debut in 2003 in FIS ski jumping . From July 2003 he started in the Ski Jumping Continental Cup . At the Junior World Championship in Kranj in 2006 he won silver with the team and a year later at the Junior World Championship in Tarvisio gold. In the 2006/07 Continental Cup season he was able to achieve a placement among the top ten for the first time in the overall standings with eighth place. He had previously won several Continental Cup competitions. Since then his performance decreased significantly, he missed the jump into the senior national team and thus into the ski jumping World Cup . At the Slovenian Ski Jumping Championships in 2009 in Kranj, he won the silver medal with the team.

After a serious fall in 2011, Roglič ended his career as a ski jumper and switched to road cycling . From 2013 Roglič drove for the Slovenian cycling team Adria Mobil , for which he won the one-day race Croatia-Slovenia in the following season . In 2015 he won the overall ranking of the Tour of Slovenia and the Tour d'Azerbaïdjan .

After a successful season, Roglič moved to the Dutch team Lotto NL-Jumbo , a UCI WorldTeam, in 2016 . In his first year at World Tour level he showed his talent: At the Giro d'Italia 2016 , he surprised everyone with his second place in the opening time trial in Apeldoorn , only a hundredth of a second behind the winner Tom Dumoulin . He later won the 40-kilometer time trial in Chianti on stage 9 . Furthermore, Roglič was Slovenian time trial champion and tenth in the time trial at the Olympic Games in Rio de Janeiro .

In 2017 he won the Algarve Tour and won two stages in the Basque Country Tour . He also won the time trial at the Tour de Romandie and came third in the overall standings.

Primož Roglič at the UCI Road World Championships 2017 in Bergen

In the 2017 Tour de France , he won the 17th stage after being able to pull away from a breakaway group at the Col du Galibier around 35 kilometers from the finish, making him the first Slovene to win a Tour de France stage. At the end of the season he won the silver medal in the time trial at the World Championships in Bergen . 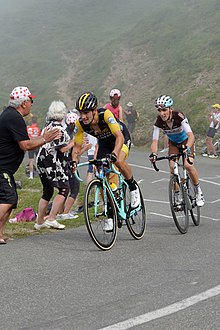 In 2018, Roglič had some successes in stage races: he won the overall ranking of the Tour of the Basque Country, the Tour de Romandie and the Tour of Slovenia. In addition, he won the 19th stage of the Tour de France 2018 after attacking in one descent and thus advanced to third place in the overall standings, 13 seconds ahead of Chris Froome and, 19 seconds behind Tom Dumoulin, second place in Range. In the time trial on the 20th stage , however, Roglič lost his podium place again to Froome and finally finished the tour fourth in the overall standings.

In March 2019 he won the Tirreno – Adriatico race and in May 2019 the Tour de Romandie for the second time , where he also won three of the five stages. In autumn of that year he won his first Grand Tour , the Vuelta a España, after taking the lead by winning the individual time trial of the 10th stage.

Success as a ski jumper

Victories in the Winter Continental Cup

Statistics as a cyclist

Overall winner of the Vuelta a España