Ugine is a French municipality with 7039 inhabitants (at January 1, 2017) in the department of Savoie in the region of Auvergne Rhône-Alpes . It is the capital of the homonymous canton of Ugine in the Albertville arrondissement .

Ugine is located in the Western Alps, about 44 km east-northeast of the prefecture of Chambéry and 28 km southeast of the city of Annecy (as the crow flies). At Ugine the gorge-like valley of the Arly widens and joins the valley of the Chaise . Below Ugine the chaise flows into the Arly. Three different mountain massifs rise around the small town: the Massif des Bauges in the west, the Massif du Beaufortain in the east and the Massif des Aravis in the north. The Chaîne des Aravis mountain range , a special geographical feature of the latter massif, begins directly north of Ugine with the 2132  m high Aiguilles du Mont and the 2407 m high Mont Charvin , which is the highest point in the municipality. The Chaîne des Aravis also marks the western border of the municipality, which from there encompasses the entire eastern slope of Mont Charvin down to the river bed of the Arly. In a southerly direction the Arly drains the valley and flows into the Isère after about 10 kilometers near Albertville . The municipality is associated with the Massif des Bauges Regional Nature Park as an access point .

Ugine borders on the west side of the Haute-Savoie department and its municipalities Manigod , Le Bouchet-Mont-Charvin and Val-de-Chaise with Marlens . The other neighboring communities are Saint-Nicolas-la-Chapelle and Crest-Voland in the north, Cohennoz , Villard-sur-Doron and Queige in the east, and Marthod in the south. The small town of Ugine is divided into several parts with their own place names:

There are also many hamlets and farms on the large community area, which is divided by several rivers and erosion valleys, including:

With 7039 inhabitants (as of January 1, 2017) Ugine is one of the larger municipalities in the Savoie department. The population growth is characterized by industrialization. The locals of Ugine are called Uginois (es) in French .

The county of Savoy , which emerged in the High Middle Ages , also included the area of ​​Ugine, whose name is derived from the Latin augia (flood plain). Frequent flooding of the valley floor meant that the first settlements were built on the slopes. The place Ugine was created on a protruding slope about 50 m above the valley floor, i.e. in a central position to control the Chaise valley and the Arly valley. Boniface of Savoy , son of Count Thomas I (Savoy) and later Archbishop of Canterbury , received Ugine as a fief for apanage in 1233 and fortified it in the following years with a city wall and several castles spread across the valley. Ugine's peripheral location in Savoy on the border with the counties of Geneva and Faucigny meant that several attacks took place on Ugine in the 13th and 14th centuries, during which the village and the surrounding area were set on fire in 1307. With the Treaty of Paris concluded in 1355, the Faucigny first fell to the Counts of Savoy , and through further changes of ownership in 1400 also the county of Geneva. As a result, Ugine was in the interior of the House of Savoy , which had meanwhile risen to the duchy, and was no longer exposed to the attacks of neighboring feudal states. 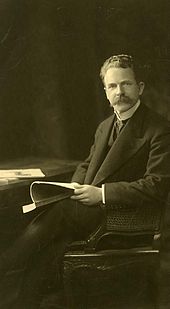 The industrialization of Ugines began in 1904 when the Swiss chemist and entrepreneur Paul Girod opened a factory for ferro-alloys . In his factories he used the electric arc furnace, which had been invented a few decades earlier , an electrically operated melting furnace with which the quality of the alloys could be increased and controlled very precisely. The abundant hydropower in Ugine was the main reason for the settlement of this energy-intensive industry and made it possible to combine electricity generation and metalworking in one location. Ugine gained additional attractiveness as an industrial location from the Annecy - Albertville railway line, which opened in 1901. In 1908 the company was expanded to include an electric steelworks. At the same time, new districts with workers' apartments and a power grid were built in Ugine, which also made it possible to obtain energy from hydropower plants from the surrounding valleys.

During the First World War , steel production in Ugine played a central role in supplying France with arms steel. Of the several hundred citizens drafted as soldiers, 89 from Ugine and Outrechaise and 40 from the then independent municipality of Héry-sur-Ugine died in the war. In addition, around 70 people fell victim to the Spanish flu towards the end of the war . During the Second World War , Ugine found itself in the unoccupied zone after the German Wehrmacht had conquered France . The steelworks were therefore initially able to continue producing as an independent operation, but the raw materials produced were made usable for the German war economy within the framework of the armistice obligations. In November 1942 the Italian occupation of the areas to the left of the Rhone followed , until finally in September 1943 the German troops marched into this part of France and took direct control of the steelworks. At the same time, the Resistance had been able to set up structures that were powerful enough to cover the steelworks in Ugine, which were important for the war effort, with a series of acts of sabotage and bomb attacks, thereby temporarily bringing production to a standstill. The fighting culminated in an attack on the railway line, which is important for the transport of goods, in June 1944, which was followed by retaliatory action in which 28 civilians from Ugine were shot and several houses were destroyed. On August 23, 1944 , Ugine was liberated by Allied troops.

In the second half of the 20th century, further metalworks settled in Ugine. The railway line to Annecy was gradually dismantled: after the cessation of passenger traffic in 1938, it was completely shut down and rededicated in the 1960s, and since 2006 there has been a high-speed, almost intersection-free cycle path on the entire Ugine - Annecy route. The Ugine - Albertville section continues to operate as a freight line for the metal works. Changes in the structure of the municipality concerned the incorporation of Outrechaise 1963 and Héry-sur-Ugines 1971 and the renaming of the place in December 1952 from Ugines to Ugine .

In the old town center there are still some medieval houses, including one of the four permanent houses , the Château Proust , which houses a restaurant. Below the town center is the Château de Crest-Cherel , another permanent house from the 13th century, which today houses a local history museum with the Musée des arts et traditions populaires du Val d'Arly . In 12 halls it shows historical objects from professional and private rural life as well as excavations of medieval fortifications. The old station building has been restored and now houses the tourist office.

The Saint-Laurent church dates back to a Romanesque church building from the 12th century, of which the choir has been preserved. The main building was rebuilt in the Baroque style in 1685 and expanded to the west in 1869. The formerly independent village of Héry has a church from 1760, which also replaced an earlier church.

The Mont Charvin (right) as part of the mountain range Chaîne des Aravis seen from Ugine from.

The Mont Charvin massif offers several hiking trails. The east route to the summit is via the Via Ferrata Pas de l'Ours . In contrast to the neighboring municipalities, Ugine itself is not a winter sports center, but there is a pole tow lift in Les Rafforts that leads from 930 m to 1224 m and serves some slopes. In Ugine a 31 km long cycle path begins on the disused railway line to Annecy. 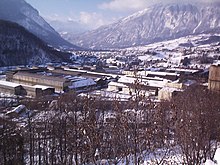 Various metal manufacturers of international importance are still the main industry in Ugine today, including:

Despite the large community area, there are only a small number of farms in Ugine, which is also showing a strong downward trend.

Ugine is connected to the surrounding towns via département roads, the course of which is based on the river valleys. The D1212 (formerly National Road 212) runs parallel to the Arly and connects Ugine with Albertville and, in the opposite direction, with the mountain villages in the upper Arly Valley. From here the D1508 (formerly national road 508 ) branches off in Ugine in the direction of Faverges and Annecy. In addition, there are several smaller streets that have special functions in the municipality:

The nearest possible motorway connection is the A430 in Albertville. There is also an SNCF train station there, which can be reached by bus. Airports in the region are Geneva (80 km), Chambéry-Savoie (70 km) and Lyon-St-Exupéry (150 km).

The French river Ugine of the same name has no connection with the place. It is a 12 kilometer long mountain stream near Bernex (Haute-Savoie) , which flows into the Dranse d'Abondance south of Lake Geneva .

Parishes in the Arrondissement of Albertville