Angles-sur-l'Anglin is a French commune in the Vienne department in the north of the Nouvelle-Aquitaine region near the confluence of the Anglin and Gartempe . The place with 357 inhabitants (as of January 1, 2017) is classified as one of the Plus beaux villages de France ( Most Beautiful Villages in France ).

The discovery of the prehistoric Roc aux Sorciers (Magician's Rock) from Magdalenian has confirmed that the Cro-Magnon man lived on the banks of the Anglin some 14,000 years ago. The site, about one and a half kilometers outside the village on the right side of the river, extends for about fifty meters and is divided into two separate sections.

Further excavations unearthed rich finds of bone and stone tools. In the imposing vault of the Taillebourg cellar, entire herds of Steppenwisent reliefs were uncovered, as well as sculptures of several horses, the bust of a man in profile and female body parts.

These finds of the highest quality and of particular interest make Angles-sur-l'Anglin an important place of early history .

The name of the place and the river indicates the Germanic tribe of the Angles , who moved to the British island in the 5th century AD . A dispersed part of the tribe stayed on the mainland and was settled by Charlemagne on the banks of the river, which was later named after him. The root word "fishing" can be found in the German and French country names "England" or angleterre .

Forerunner of the castle

Angel statue in the market square

At the height of the cliff, above today's castle ruins, was the location of a " moth ", a mound of earth or rock, crowned by a wooden watchtower, a forerunner of the keep or donjon . The Saint-Pierre chapel, built in the 12th century, stands on it today. The remains of the moth can be found in their immediate vicinity.

The first stone castle fortress was built by Gilbert, a bishop of Poitiers (975-1020), on the rocky cliff just above the river. The location on the rock ridge rising vertically from the valley floor for more than 40 meters was already predestined for a military fortress, especially from an economic point of view. On the south-facing side of the valley, complex fortifications were largely spared, as the vertical rock offered a natural fortress.

On the eastern "head side" and "in the shadow" of the castle, a lower town developed at the foot of the cliff. In the north of the castle the upper town was built, separated from it by a valley cut. Castle and town received city ​​rights in 1025 .

After 1025 the command of the Angles garrison was entrusted to a cousin of Bishop Gaucelme Roy and his nephew. In the same year a stone bridge was built over the river, which lasted until 1741.

The abbey of St. Croix with its church was founded in 1040 by Isembert I, a bishop of Poitiers, on the left bank of the river opposite the castle. Their monks lived according to the rules of the Benedictines . 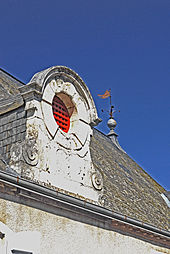 Dormer window, in the Renaissance style

After 1070 the Bishop of Poitiers Isembert II granted the monastery of St. Croix more independence. In 1088 Hugues VI. from Lusignan to the church of the Abbey of Saint-Cyprien in Poitiers. Isembert II's successor, named Pierre, also granted more authority to the municipality of the upper town, Saint-Pierre, on the right bank of the river, in 1090.

After 1094, Pope Urban II replaced the Benedictine monks with canons who lived according to the rules of the Augustinian order and held the abbey until the revolution .

The castle was in the hands of the Lusignan family. In 1096, before Hugo von Lusignan and his son Hugo embarked on the crusade , the Abbot of Poitiers granted them the profits from the abbey. The barons of Lusignan administered their castle and the village with direct taxes, completely independently, with no tribute or other obligations to the bishops of Poitiers. They had the castle, especially the donjon, reinforced in terms of defense technology.

The lords of Lusignan gradually left their land, they sold or traded it. In 1268, William of Lezay-Lusignan gave the castle and its rights to the bishops of Poitiers in exchange for the Villefagnan estate. On March 21, 1281, Hélie Lusignan, with the support of Pope Boniface VIII against Philip the Fair, sold two thirds of the land to the Bishop of Gautier Bruges, whose exile it became.

In the 14th century, when the Hundred Years War had begun, the Oyré family defended the castle for the bishops. One of its members, Guichard IV, was celebrated for his achievements at the Battle of Poitiers in 1356, which he had bravely defended alongside Jean II (the Good). He then fought under the command of Edward of Woodstock, the "Black Prince" who had been commissioned to obey the King of France, their new ally. He succeeded Leo, the son of the governor of the "Black Prince". He beautified his castle, which was named Château Guichard.

On May 23, 1372, Bertrand des Guesclin besieged and captured the castle (or what Captain Pierre Gedoin gave him for free) and the village was largely destroyed. The bishops of Poitiers then became the sole masters of the chateau again.

Before the end of the Hundred Years War, at the beginning of the 15th century, two bishops of Poitiers decided to renovate the old fortress. In the 15th century, the monks of St.-Croix Abbey worked to rebuild the village, and from 1441 to 1482 they sold many lands. Masses were celebrated in the restored church from 1481.

Hugues de Combarel built a residential wing in the fortress in the Renaissance style . Interest in amusement took precedence over interest in defense. The old keep was also changed accordingly. At the end of the 15th century the beautiful days of the fortress came to an end.

in the lower village

In 1567, Admiral Coligny housed a garrison of Protestants who holed up in the castle until 1571, the day he became governor of Châtellerault. The abbey was destroyed by the Protestants.

Her Abbot Boivert was subsequently a leader of the Catholics, who raged even worse. In 1591, the Ligueurs (partners of the league) came across the castle and sacked it. In 1650 there were further looting. In 1652, the Duke of Roanne became the commandant of the royal troops that fought against the Frondeurs des Poitou.

The city of Angles-sur-l'Anglin was a regular source of income for the bishops of Poitiers in the 16th and 17th centuries. There are reports that the holding of fairs, the oven and the mill (washed away by the river several times, in 1646, 1657 and 1699, which still exists with its bike today) brought in 6,200 pounds after 1650.

These income focuses indicate a certain prosperity in the small town, at the crossroads of three provinces (Poitou, Berry and Touraine), a place where trade flourished. It seems that some used it to smuggle salt to increase their income. This led to the establishment of a municipal salt store in the attic of the “tax office” ( Gabelle ) in the city in 1664.

However, the castle was not restored. Due to the great damage caused by the civil wars, it was officially abandoned in the 18th century, following a motion to the parliament in Paris. The château restoration requirement was waived in 1708, valued at ten years of fiefdom income, or £ 50,000, but included a makeshift repair of the castle of £ 2,000.

Saint-Croix, with the former abbey church

The bridge was removed but not replaced in 1741. One was content with a ferry. A bridge would have cost £ 20,000 to build and the situation of the place at the crossroads of three provinces was rather complicated.

In 1792 the castle was declared a ruin, but remained confiscated and the municipality decided to use the stones for demolition. But since access was difficult and demand was low, the ruins could be saved.

The community took over the fortress for the symbolic franc in 1986 and is committed to protecting it.

The upper village is grouped around the small market square, on which the statue of an angel indicates the origins of the place name.

The location is dominated by the still impressive ruins of a medieval castle , the construction of which was commissioned by the bishops of Poitiers and which lasted from the 12th to the 15th century. The remains of the fortress crown the back of a limestone cliff rising 40 m vertically from the valley floor above the river. In its shadow, the old houses of the lower village jostle up to the banks of the Anglin.

At the foot of the castle rock there is an old water mill that is no longer in operation and which was once powered by the Anglin .

Here a bridge leads to the opposite bank to the district of St.-Croix with the remainder of a former abbey church of the Augustinian Canons from the 13th century, in whose cemetery a Lanterne des Morts ( death lantern ) from the 12th century can be viewed. Only a fragment of the nave has survived from the Romanesque monastery church which was destroyed in the Wars of Religion and which formerly had a transept with a crossing tower and three apses. The remaining ruins of the church were demolished in 1835 when a road was built.

The "Rock of the Magician" is an important prehistoric site of sculptures from the Magdalenian, in Stone Age rock dwellings, about 1.5 kilometers outside the village on the right bank of the river. The replicas of the sculptures can be seen in the new museum in the village.

It was built in the 12th century on the remains of the former "Motte" above the castle. It is separated from the fortress by the “English moat”, a natural crevice.

Communes in the Arrondissement of Châtellerault

The most beautiful villages in France in Nouvelle-Aquitaine