Brechte is the statistical district 11 and at the same time a northern part of the city of Dortmund . It belongs to the municipality of Eving and has an area of ​​716  hectares with about 9500 inhabitants. The place is at an altitude of 78  m above sea level. NHN .

Brechte is a popular residential area and, in contrast to most of the surrounding Dortmund and neighboring districts of Lüner, has an accumulation of upscale residential areas. The place is characterized by its village character. Extensive green and forest areas, including landscape protection areas, extend to Lünen-Brambauer , Lünen-Gahmen , Holthausen and Eving .

Brechte is located around eight kilometers north of Dortmund city center and five kilometers southwest of the city center of the city of Lünen, which borders Brecht to the north . The place is divided into two larger settlement areas (north and south) by the federal freeway 2 running in east-west direction and by the Dortmund freeway ring.

The northern part is characterized by the actual "village" and the surrounding residential areas, which were mainly created from the 1960s. In the original village center there is the Protestant St. Johann Baptist Church and the Catholic Church as well as a large number of half-timbered houses by Dortmund standards. This area is still home to several farms. The residential areas are predominantly characterized by bourgeois single and two-family houses as well as smaller multi-family housing estates.

The southern part consists mainly of single-family and small apartment buildings. To the west of this settlement area, on the border with the Dortmund suburb of Holthausen, the new construction area Brechteer Heide , one of the largest current construction areas in the city, is being built. The south of Brechte is bordered by the Grävingholz and the Süggel nature reserve . There are many rare plants and animals in the Süggelwald.

Structure of the population of Brechte:

The average income in Brechte is around 15% above the Dortmund average.

The traditional local coat of arms of Brechte 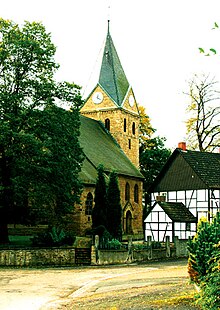 The center of the village is the St. Johann Baptist Church . 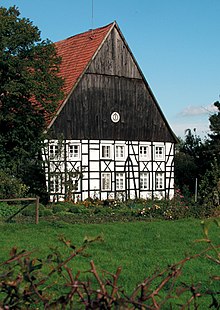 The Lohhof, one of the oldest and largest courtyards

Description: The coat of arms of Brechte is divided and at the bottom split into blue and red, each with a bound golden sheaf. Two hoopoes above in gold.

Symbolism: Brecht's traditional heraldic animal is the hoopoe and the two in the coat of arms can be seen as a reference to the two districts of Unterdorf and Oberdorf. The two harvests indicate the rural tradition of the place.

The hoopoe is a shy bird that criss-crosses large meadows with hedgerows and prefers open areas of forest. Today's Brechtian lowlands were such an area. The bird no longer occurs in today's local area. In today's local area there is a street with the street name "Wiedehopfweg".

Around the year 950 the first church in Brechte was first mentioned in a register of the Essen monastery.

In 1254 the battle took place on the Wülferichskamp between the troops of Cologne's Archbishop Konrad and the bishops Otto II of Münster and Simon von Paderborn . The Brechte baptismal font was built around 1270. In 1282 Brecht was mentioned as a separate parish of St. John .

From the year 1356 it was reported that the Lohhof, one of the oldest and at the time largest farms, was sold to the church lord von Brechte.

The city of Lünen was relocated from the north bank to the south bank by order of the Count von der Mark and thus came under the jurisdiction of the parish of Brechte from 1336 to 1341. It was not until 1366 that St. Georg in Lünen became a parish church depending on the mother church in Brechte. 1426 is the year of origin of the oldest existing document in the church archive. The Reformation was introduced in Brechte in around 1570. In 1627 St. Georg in Lünen was finally detached from Brechte. The school and sexton house was built in 1690. After that, regular school lessons began.

In 1803 Brecht fell, like the entire area of ​​the free imperial city of Dortmund , to Nassau-Orange . From 1808, Brechte was part of the Grand Duchy of Berg . After the end of the French occupation in 1814, Brecht became part of the Prussian province of Westphalia . In 1817 Brechte was added to the mayor's office in Lünen. The parish's property was distributed to farmers and kotters from 1825 to 1826 . The first pure brick house in the community was the rectory, which was built in 1832–1834. In 1863 a new school was built on the church square and a war memorial was erected in 1872 . The new school on Evinger Strasse was inaugurated in 1894.

In 1904 the Fredenbaum - Brambauer tram line was opened. From 1905 Brechte was part of the Eving office. The parish Brambauer was spun off from Brechte in 1907. In 1913 Brechte was connected to the power supply. Brechte, Brambauer and Holthausen formed the new Brambauer office that was created in 1914 . When the French occupation soldiers shot the school clerk in 1923, 15,000 people took part in the protests against the occupation that followed. During the land consolidation carried out in 1924 , the agricultural scattered areas were merged. On April 1, 1928, Brechte and Holthausen were incorporated into Dortmund. In 1935, the construction of the federal highway 2 began in the Brechtian area.

In 1938 mining began in Brechte. Shaft 6 of the Minister Stein / Hardenberg mine was sunk . The Catholic parish in Brechte was founded in 1941. On November 11, 1944, there was a heavy bombing raid on Brechte. American troops took the district on April 15, 1945.

On July 1, 1950, there was an exchange of territory between the cities of Dortmund and Lünen. Here Brechte received an area west of Oetringhauser Straße with an area of ​​about 18.16 hectares. Kirchbruchstraße remained in Lünen.

From 1952 to 1954 the daytime facilities of shaft 6 were expanded as a weather and cable car shaft. The Catholic Church was consecrated on May 16, 1959. After 50 years, mining in Brechte ended on August 30, 1988 with the relocation of the headframe of shaft 6.

In terms of traffic, Brechte is connected to the Dortmund light rail network by the U 41. The U 41 runs from Brambauer to Hörde through downtown Dortmund. There is also a bus connection (line 414) that connects Brechte with Kemminghausen . The bus connection to Lünen - it was line 1 of the Lüner Stadtwerke - no longer exists.

The nearby Dortmund-Nordost driveway enables a quick connection to the A2 motorway.

Dortmund city districts and statistical districts (with other districts)