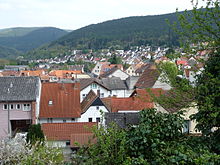 Lambrecht ( Pfalz ) is a town in the Bad Dürkheim district in the Palatinate Forest . It is the administrative seat of the association of the same name . It owes its nickname "Clothmaker's City" to the textile industry that shaped the place for a long time.

Lambrecht lies in the middle of the central Palatinate Forest in the Lambrecht Valley ; the south-west of the district extends as far as the Elmsteiner Tal . In the northeast is the Karl-Rauch-Siedlung ; The hamlet of Iptestal is located in the extreme southwest of the district . Neighboring communities are - clockwise - Deidesheim , Lindenberg , Neustadt an der Weinstrasse , Esthal and Frankeneck . To the east of the city is the so-called Lambrecht Fault, a geological dividing line to which the Haardt connects.

The city is traversed by the Speyerbach ; in the west it forms the boundary to Frankeneck and Esthal. In the city center the Luhrbach flows into it from the left . The highest mountain is the Kaisergarten at 519  m above sea level. NHN in the south, which is located directly on the boundary with Neustadt an der Weinstrasse; the latter also applies to the Schauerberg further northeast . In the north of the urban area the Eichelberg and the Kreuzberg and in the west the Schorlenberg and the Hohe Kopf extend .

In 977 Lambrecht is mentioned for the first time in a document; Duke Otto von Worms founded the Benedictine monastery of St. Lambrecht in Grevenhausen in honor of the holy bishop Lambert of Liège . In 1553, however, the monastery was closed. In 1568 the buildings of the monastery including the houses, church and fields were taken over by the Elector Friedrich III. left as asylum to displaced Walloons .

In 1838/39, the neighboring villages of St. Lambrecht and Grevenhausen merged, the double name St. Lambrecht-Grevenhausen was used until the city elevation in 1887. On August 25, 1849, Lambrecht became a railway station with the opening of the Neustadt-Frankenstein section - as the end of the Rhine-Saar route for coal transport. On December 21, 1887, Lambrecht was granted city rights.

In 2017 and 2018, the crimes of three geriatric nurses in the Lambrecht Valley senior citizens' home rocked the city's population. 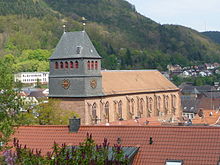 In 2007, 43.8 percent of the population were Protestant and 30.4 percent Catholic. The rest belonged to another religion or were non-denominational.

Lambrecht has an independent Catholic parish (Herz Jesu). The Catholic parish is responsible for the St. Lambertus Catholic day-care center . The pastor in the parish community looks after Lambrecht as well as the communities of Lindenberg, Neidenfels-Frankeneck and Weidenthal-Frankenstein. The parish of Lambrecht is part of the parish association Neustadt (Weinstrasse) in the dean's office Bad Dürkheim and belongs to the diocese of Speyer . There is also a memorial to Edith Stein in the Toni Schröer House .

A Protestant church community exists together with the neighboring town of Lindenberg . Lambrecht is part of the Protestant deanery Neustadt in the Evangelical Church of the Palatinate .

The city ​​council in Lambrecht consists of 20 council members, who were elected in a personalized proportional representation in the local elections on May 26, 2019 , and the honorary city ​​mayor as chairman.

City Mayor is Karl-Günter Müller (FWG). In the direct election on May 26, 2019, he was confirmed in office with 53.06% of the votes. His predecessor was Michael Stöhr from the CDU, who held office until 2014.

The city center, Beerentalstrasse , the former Haas Brothers cloth factory and the cemetery are designated as monument zones. There are also numerous individual objects that are under monument protection .

The municipality is located in the Palatinate Forest Nature Park , which in turn belongs to the Palatinate Forest-Vosges du Nord Biosphere Reserve and is the seat of its office. There are a total of five natural monuments within the city limits , including the Dicker Stein rock formation southwest of the city center on the flank of the Hohe Kopf. On top of it is a small observation tower , the thick stone tower , which was built in 1933 from wood; it offers two viewing platforms. The knight's stone of the same name with the number 256 is also located at the Kaisergarten .

Latars are celebrated on a summer day . Egg picking takes place at the picking area on Easter Monday . Another traditional event is the delivery of the billy goat tribute as part of the billy goat auction to Deidesheim on Whit Tuesday

There is also the billy goat festival on the “Tuchmacherplatz” Fabrikstrasse opposite the “Jahnwiese” sports field. The Lambrecht “billy goat kerwe” takes place on the first Saturday in August.

Other events include summer evening music in the former monastery church and the Advent market. Every two years the businesses located in Lambrecht and the surrounding area organize an exhibition. The Gäsbock mountain bike marathon starts every Saturday on the second weekend in May; it begins and ends in Lambrecht. 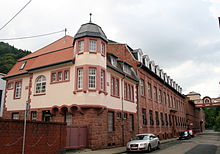 For a long time Lambrecht was considered a city of cloth makers. With the Huguenots who immigrated in the 16th century , more precisely with the Walloons from Belgium , a flourishing drapery industry developed in Lambrecht. In the course of this, for example, on Wallonenstraße, a street in downtown Lambrecht, a real cloth making center with many small hand-weaving mills was built. The old guild house with a bay window from 1606 and 1607 is a reminder of this time. The magnificent building goes back to a wealthy Walloon immigrant. After the industrial revolution , many companies did not make the leap to factory scale . Nevertheless, nine cloth factories still existed in 1931, and it wasn't until the 1960s that the cloth-making industry was finally "off". Moreover Lambrecht was temporarily the site of a Filzfabrik that from 1881 to the United Filzfabriken belonged

In the historical buildings of a former cloth factory, Jola Spezialschalter GmbH & Co. KG has been producing devices for level control and leakage detection since the 1950s. Felts, paper machine coverings and needle felts are now manufactured in another cloth factory. A medium-sized supplier industry has also developed in other ways. In addition to these businesses, tourism and, to a lesser extent, forestry are among the economic factors of the city, which also has shops, handicraft businesses and service providers that cover daily needs. Since the end of the 19th century, a newspaper has been published locally with the Talpost .

In addition, the city was the seat of the Stadtsparkasse Lambrecht , which was merged into today's Sparkasse Rhein-Haardt in 1972 .

There are three kindergartens and two general education schools in Lambrecht. As a secondary school, there is a Realschule plus on site. High schools are located in the larger neighboring town of Neustadt an der Weinstrasse . The adult education center and the Palatinate Academy are available. 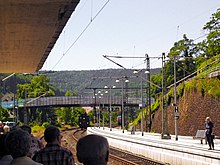 Lambrecht was connected to the railway network in 1849 with the completion of the Palatinate Ludwig Railway , from which the Mannheim – Saarbrücken railway line emerged. Since 2003, the S-Bahn RheinNeckar has been serving the station , which is located on the northern outskirts, with the S1 and S2 lines . In 1902 an industrial track was built from the Lambrecht train station via Frankeneck to the Sattelmühle , from which the cuckoo train, opened in 1909 and leading to Elmstein, emerged . Passenger traffic ended in 1960 and freight traffic on the Frankeneck – Elmstein section followed around a decade and a half later. The Frankeneck station, located in the district of Lambrecht, was converted into a station part of the Lambrecht equivalent and is still used by freight traffic today. The Kuckucksbähnel has also been functioning as a museum railway since 1984.

The federal highway 39 crosses the city. In the north-west of the district, the state road 499 branches off to Waldfischbach-Burgalben . The bus route 517 of the Rhein-Neckar transport association operated by the company Busverkehr Imfeld also connects the city with Neustadt an der Weinstrasse and Iggelbach .

Hiking trail on the district of Lambrecht

Cities and communities in the Bad Dürkheim district