The 2032 Summer Olympics (officially XXXV Olympiad Games ) are a planned international multisport event. They are supposed to take place in the Australian city ​​of Brisbane . It will be the third Summer Games in Australia after Melbourne in 1956 and Sydney in 2000 . The opening ceremony is scheduled for July 24, 2032 .

The new IOC selection process was approved at the 134th IOC meeting on June 24, 2019 in Lausanne . The main proposals based on the relevant recommendations of the 2020 Olympic Agenda are:

To increase flexibility, the IOC amended the Olympic Charter . The rule that set the election date to 7 years before the games was deleted. In addition, the passage that only a single city / region / country can host has been deleted.

The full composition of the summer commissions overseeing interested hosts or potential hosts whom the IOC wishes to interest is as follows:

In accordance with the mandate of the Future Host Commission with rules of conduct, the new IOC application process is divided into two dialogue phases:

In addition to Brisbane, Germany with the Rhine-Ruhr region (North Rhine-Westphalia) , Qatar and Indonesia with its capital Jakarta also expressed interest. As part of the new selection process, the IOC chose Brisbane as the preferred applicant early on.

The application for the Australian city of Brisbane stipulated that 84% of the existing or temporary infrastructure should be used. At the center is the Brisbane Cricket Ground known as The Gabba , which will be used for athletics and celebrations of the games after a renovation. Further competitions will primarily take place in Brisbane itself, but also in Gold Coast , which hosted the 2018 Commonwealth Games .

At the moment the concept for the competition venues is as follows: 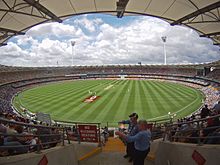 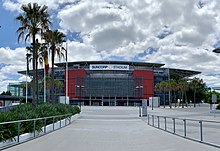 North of the Gold Coast

South of the Gold Coast