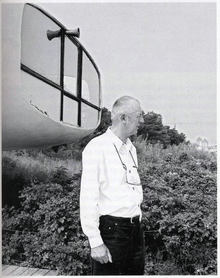 Ulrich Müther (1999) in front of one of his creations, the emergency rescue station in Binz

Ulrich Müther (born July 21, 1934 in Binz ; † August 21, 2007 there ) was a German civil engineer and contractor . He designed and built around 74 shell structures, in technical language: double-curved concrete shell structures , and thereby became an important representative of modern architecture . Some of Müther's buildings are assigned to organic architecture , such as the Ahornblatt restaurant in Berlin, the Seerose restaurant in Potsdam and the Kurmuschel concert shell in Sassnitz .

After elementary school, Müther completed an apprenticeship as a carpenter and worked as a journeyman for a year . At that time, the son of an entrepreneur was only able to get a place at university as a worker. Only then was he able to study structural engineering at the Neustrelitz Engineering School from 1951 to 1954 , which he finished as the youngest graduate. Müther got his first job from 1954 to 1958 as an employee in the design office for industrial buildings in Berlin, which was subordinate to the Ministry for Construction of the GDR. There he was involved in the planning of power plant constructions and mainly involved in the planning of cooling towers. During this time he completed a distance learning course at the Technical University of Dresden from 1956 to 1963 .

His college friend and architect Ingo Schönrock (1933–2009) suggested to him, after attending a lecture at the pioneer of concrete shell construction Félix Candela , that Müther dedicate his thesis to the hyperbolic parabolic shell . Müther was fascinated by them, later he called them “Hypar bowls” for short. These consisted of a network of steel girders that created twice curved surfaces from straight lines. This means that a hypar shell can also be clad with straight boards.

His first construction project involved the terrace roofing, and finally the 200 m² multi-purpose hall of the Haus der Stahlwerker holiday home in Binz for the workers of the VEB Stahl- und Walzwerk Riesa (demolished after reunification, today Hotel Vier Jahreszeiten ). The supervisor of his diploma thesis at the TU Dresden, Hermann Rühle, referred him to Reinhard Rabich at the chair for reinforced concrete construction in Berlin. Rabich dealt with the membrane theory for single-shell hyperbolic rotational shapes , which are still used today in cooling towers. Rühle also procured foreign specialist literature for him.

In 1958 he took over the technical management of the family-owned construction company. The family business had already been expropriated by the socialist state power as part of Aktion Rose in 1953, but was initially returned after June 17, 1953. In 1960 the company was given the legal form of a production cooperative for the crafts , in 1972 it was nationalized and became VEB Spezialbetonbau Rügen . Mueller's specialization in shell construction with the concrete spraying process prevented his company from being integrated into a building combination in 1972 . In 1990 the state-owned company was transferred back to Müther. In 1999 the company Müther GmbH had to file for bankruptcy. Regardless of this, Müther was a much sought-after participant in congresses and specialist conferences as well as a provider of workshops .

Both in the GDR and after reunification, Müther was a loner among civil engineers; he self-deprecatingly and cautiously called himself a "master builder of Rügen". His lifelong teacher remained Félix Candela (1910–1997). Müther's company logo consists of two juxtaposed and steeply rising Hypar bowls, which correspond to the longitudinal section of the Church of San José Obrero in Monterrey (Mexico) by Félix Candela and Enrique de la Mora (1960). 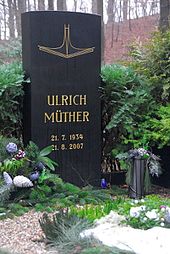 Müther's tombstone on the ev. Cemetery in Binz with the signet of VEB Spezialbetonbau Rügen.

In 1995 Müther founded the Christian Müther Foundation “Sailing with Children with Asthma” . He named it after his only son and ophthalmologist Christian, who died on November 20, 1989 as a result of an asthma attack. Children with asthma could take part in a three-day sailing trip under medical supervision . The sailing boat originally belonged to Wernher von Braun . Müther and his son Christian took it out of the silt and restored it. In July 2014 the 25th Christian Müther commemorative trip was undertaken, which by then had been made possible for 5,000 children. In 2018, a total of fifteen boats took part in the sailing trip thanks to the support of numerous donors and volunteers. In the summer of 2019, the 30th and last three-day sailing trip was organized for 60 to 70 children with asthma and bronchial diseases, and the Foundation Board is withdrawing from its work for reasons of age. There will continue to be other water activities with children with asthma. Ulrich Müther was married to Astrid von Zydowitz.

In the Baltic seaside resort of Binz, a place on the beach promenade was named after Müther on October 3, 2015.

On the occasion of the 700th anniversary of Binz in 2018, Müther was honored with a theme week from September 17 to 21, 2018. Excursions, free lectures and an exhibition were reminiscent of the Binzer Müther. A second themed week followed in autumn 2019. From September 21 to 27, 2019, guided tours, films and an exhibition on Müther were again offered.

Its extensive archive has been looked after by the University of Wismar since 2006 and has been managed by architecture professor Matthias Ludwig since 2012. Since 2014 he has published a series on Mueller's work. In April 2017, a cooperation project between the University of Wismar and the archive of the Academy of Arts in Berlin, funded by the Federal Ministry of Education with around 470,000 euros, was launched , which is intended to make Mueller's estate accessible. The University of Wismar is also providing 250,000 euros for construction work and equipment. An archivist was hired to view, index and digitize the archive material . A project to digitize Mueller's construction plans should also be completed in 2020. In 2018 the paper restorer Susanne Grzimek restored the first 35 architectural drawings of Mueller. The construction plans are then posted on the Internet.

The supervisor of his diploma thesis at the TU Dresden, Hermann Rühle, was on the national committee of the IASS ( International Association for Shell and Spatial Structures ), which was founded in 1959 by Eduardo Torroja . In 1966 he met the shell builders Jörg Schlaich , Josef Eibl, Stefan Polónyi and Heinz Isler at a building exhibition in Budapest . These encounters inspired and encouraged him to make new attempts with model buildings made of canvas and molds made from sand hills.

Müther's first self-supporting Hypar shell was the building and oil exhibition hall for the annual Baltic Sea fair in Rostock-Schutow. This double hall was built in 1966 in collaboration with the Rostock architect Erich Kaufmann . Since Kaufmann was also the architect for the local housing association, he obtained a number of follow-up orders for Müther.

In 1968 the West German civil engineer Jörg Schlaich arranged for him to study in Stuttgart. The Essen company Torkret provided him with a shotcrete machine for testing purposes. This machine was designed for the dry spraying process and was first used in 1968 for the construction of the multi-purpose hall in Rostock- Lütten Klein . The Oberhof luge track (1969/70) is also his concept. Müther developed the wet spraying process for the Oberhof luge track, which was suitable for shotcrete without formwork. The reinforcing steel was flanked on both sides by a fine-meshed wire mesh ( rabbit wire ), so that the shotcrete could be applied without formwork. Through the mediation of the structural engineer Stefan Polónyi , who at that time lived in West Berlin , Müther acquired a wet spraying machine in Hesse, for which he was granted an exit permit.

On the Baltic coast in particular, Müther built a number of spectacular buildings such as the Ostseeperle beach restaurant in Glowe (1968) as a tilted Hypar bowl with a window front opening onto the sea, the tea pot in Warnemünde and the emergency rescue station in Binz. The Hypar bowl he built in Magdeburg in 1969 has been a listed building since 1990 . In Potsdam, Müther built the eight-shell lake restaurant “ Seerose ” as a contrast and loosening up the surrounding prefabricated buildings. Müther's buildings became an important export item for the GDR. a. a cycle track in Havana , Cuba; and a number of Zeiss planetariums in Kuwait, Tripoli and Helsinki. In Wolfsburg, too, he designed and built the dome of the Zeiss planetarium from 1981 to 1983 as part of a compensation deal between the GDR and the FRG. In return, Volkswagen AG delivered 10,000 VW Golf I cars to the GDR in 1978 .

After 1990, some of the buildings he built were threatened with demolition due to lack of use and fell into disrepair, such as the Hypar shell in Magdeburg. Müther therefore took the renovation of some of his buildings on the coast into his own hands. After ten years of vacancy, a Rostock investor renovated and converted the former restaurant and Warnemünde landmark Teepott into a multi-purpose building within six months for around 7.5 million euros and saved the monument from demolition. However, the interior has been subdivided so that the cantilevered roof now appears to be resting on the partition walls. The demolition of the large restaurant Ahornblatt in Berlin in 2000 caused a national sensation, which had to give way to a conventional new building despite the monument protection.

In the opinion of the architecture critic Wolfgang Kil , the functional buildings of Müthers were designed for a company size that was generally no longer profitable for private investors after the fall of the Wall . Since the public sector and the Federal Property Office usually only expected use from private investors and did not develop their own concepts, many of the buildings are threatened with decay. According to Matthias Ludwig, head of the Müther archive, around 30 Müther buildings had been demolished by 2018.

Mueller's shell construction was time-consuming, but material-saving, and therefore corresponded to the economic conditions of the GDR. In the Federal Republic, on the other hand, the building materials were cheap and the labor expensive, so shell constructions there remained only an “uneconomical marginal phenomenon”.

Three of Mueller's buildings have been renovated since 2016. The Wüstenrot Foundation financed the repair of the Kurmuschel in Sassnitz , a shell- shaped cantilevered half-roof for outdoor events. The Wüstenrot Foundation also had the UFO-shaped rescue tower in Binz renovated. The building has been available for weddings again since May 2018. The Hypar shell in Templin was included in the monument promotion program of the Brandenburg Ministry of Culture in 2016. 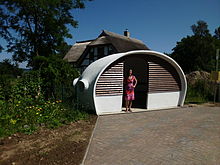 Buildings on the Baltic Sea