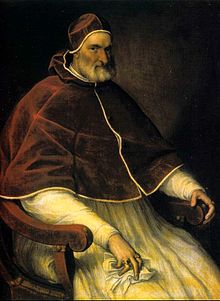 The conclave of 1559 was the electoral assembly of the cardinals after the death of Pope Paul IV and lasted from September 5 to December 25, 1559. With 111 days it was the longest conclave of the 16th century. It took place in the Cappella Paolina in the Apostolic Palace in Vatican City .

At the time of the electoral conclave, the College of Cardinals consisted of 55 cardinals, 47 of whom attended the opening of the conclave. Girolamo Recanati Capodiferro died during the conclave; two had to leave the conclave for health reasons.