Location of Carinthia in Austria

The geography of Carinthia , the southernmost Austrian state, is shaped by its location in the Eastern Alps and by the Klagenfurt Basin , the largest inner-Alpine basin landscape . Most of the cities and the Carinthian lakes, which are important for summer tourism, are located in the Klagenfurt Basin .

Carinthia is bordered by East Tyrol in the west, Salzburg in the north-west , Styria in the north-east and east, and Slovenia and the Italian regions of Friuli-Venezia Giulia and Veneto in the south . The national border is almost entirely formed by mountain ridges: in the north by the Hohe Tauern and the Gurktal Alps, in the east by the Koralpe, in the south by the Carnic Alps and the Karawanken, in the west by the Lienz Dolomites and the Schober group.

The narrowing of the state area roughly in the middle to only 44 km, together with the different terrain forms, results in the subdivision into the Upper Carinthia , which is characterized by the high mountains, and the Lower Carinthia , which is dominated by the Klagenfurt Basin and extensive river valleys . The border runs roughly from Königstuhl (Gurktal Alps) in the north to the Mittagskogel (Karawanken) in the south, so Villach is on the border line. The term Central Carinthia, on the other hand, is less clearly defined, mostly referring to the area between the Nockberge and Saualpe.

Carinthia is bordered by mountains all around. While Upper Carinthia is characterized by high mountains, Lower Carinthia is dominated by the Lavanttal Alps with less high peaks. The Drau, which flows lengthways through the country, separates the primary rock region (north) from the limestone Alps (south). The exception to this scheme is the Goldeck , the only primary rock south of the Drau.

The Carinthian mountain ranges of the Central Alps are:

The Hohe Tauern are divided into:

The Gurktal Alps extend from the Liesertal in the west to the Neumarkter Sattel in the east and from the Murtal in the north to the Untere Drautal and the Klagenfurt Basin in the south. The highest mountain in the mountain range is the Eisenhut (2,441 m). They are divided into:

The Saualpe and then the Carinthian part of the Seetal Alps in the north lie between the Görtschitztal in the west and the Lavanttal in the east. The highest peak of the Saualpe is the Ladinger Spitz (2,079 m).

The mountain ranges south of the Drau belong - with the exception of the Goldeck-Latschur group - to the Southern Limestone Alps :

The Gailtal Alps between the Drau and Gail are divided into the Lienz Dolomites from the western border to the Gailbergsattel . To the east are the Reisskofel Group (between Gailbergsattel and Gitschtal), the Goldeck-Latschur Group (between Weissensee-Weissenbach and Drautal, mostly crystalline), the Spitzegel Group and the Dobratsch . The highest peak in the Gailtal Alps is in East Tyrol and is the Große Sandspitze (2,772 m). Other peaks: Spitzkofel (2,717 m), Tamerlanhöhe (2,377 m), Reißkofel (2,371 m), Latschur (2.236 m), Goldeck (2.142 m), Spitzegel (2.119 m) and Dobratsch (2,166 m).

The Karawanken are connected to the Carnic Alps in the east and form the southern border between Carinthia and Slovenia . Your highest mountain is the high chair (2,237 m). The Mittagskogel (2,143 m) and the Petzen massif (2,113 m) lie in the Karawanken .

Carinthia also has a small part of the Steiner Alps , which are located south of the Karawanken mainly in Slovenia.

The Klagenfurt Basin extends from Villach to Lavamünd, from the Rosental in the south to Feldkirchen and Althofen in the north. It is the main settlement area of ​​the state with the cities of Klagenfurt , Villach , Sankt Veit an der Glan , Völkermarkt and Feldkirchen .

The basin is divided into valleys and basins, which are separated by hills and low mountain ranges. The following is an - incomplete - overview.

Hills and mountain ranges are: 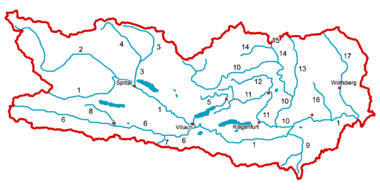 The largest river in Carinthia is the Drau (1). It reaches Carinthia near Oberdrauburg and flows through a number of valleys and basins.

The main tributaries of the Drava are in the order of their confluence:

The area valley in the Nock Mountains between Radenthein and Villach cannot be clearly assigned to a river. The northern part of the Brennsee northwards is drained by the Feldbach, the larger southern part from the Afritzer See southwards from the Afritzerbach, which flows into the Treffner Bach.

Carinthia has around 1270 lakes, mostly tongue basin lakes with a total area of ​​around 60 km², of which the four largest alone take up almost 50 km²: