Since 2012, Perm has once again been Europe's easternmost metropolis .

The name of the city is of Finnish origin and was originally a landscape designation (cf. Greater Perm ). The etymology of the name must be viewed as unclear; Deductions from various Uralic languages ​​(e.g. Finnish perämaa , distant land, hinterland ') are given as well as a possible connection to Bjarmaland, which is known from the Nordic sagas .

Perm goes back to a predecessor settlement Jegoschicha, first mentioned in 1647, which was located on the river of the same name near the confluence with the Kama . After the discovery of copper ore in 1723 by Vasily Tatishchev , a copper smelter was founded next to the village, from which an ever larger settlement developed. The settlement benefited in particular from its location on the Siberian tract , which was laid out in 1763 , one of the first major east-west axes in Russia, which led from Moscow via Perm to Siberia . In 1780 Perm was granted city rights ; In 1781 it became the capital of a governorate, later Perm Governorate . From 1781–98 and 1807–31 the main seat of the Urals iron and steel industry was located here.

From the middle of the 19th century, Perm was the most important trading center in the Urals. This development was made possible by the expansion of the transport infrastructure. Due to the ore deposits, the heavy and armaments industries developed. Since 1846 there have been regular shipping connections between the center of the country and Perm, the largest Kama port. A rail link to Yekaterinburg had existed since 1878, and to St. Petersburg since 1905 . Perm was also known as the gateway to the Urals and Siberia. A famous visitor to the city in the 19th century was Alexander von Humboldt . At that time, Perm had a notable German-speaking minority. The Evangelical Lutheran Church, built in 1864, is a holdover. In the 19th century the city was also a place of exile for political prisoners such as B. the statesman Michail Speranski (1812-14) and the writers Alexander Herzen (1835) and Wladimir Korolenko (1880-81). In 1916 the first university in the Urals was founded here.

After the outbreak of the October Revolution and the Russian Civil War , the city was occupied by Admiral Kolchak's White Guards . It was not until July 1, 1919 that the Red Army managed to recapture the city.

In the 20th century, Perm developed into an important industrial center, primarily heavy industry, while the rest of the urban development was neglected. After the incorporation (1938) of Molotov, as today's Motovilicha district was called since it was granted its independent town charter in 1931, the entire city was also called Molotov between 1940 and 1957 ( Молотов ; after Vyacheslav Molotov ).

The POW camp 207, Molotow , was located in Perm for German POWs of the Second World War . Later in the post-war period there was a large gulag camp. The Molotow ITL (corrective labor camp) existed from October 1950 to April 1953. The maximum number of inmates in the camp was 12,300 people who were used in the construction of an oil-processing plant, in road, industrial and civil construction.

With the political and economic transformations since the beginning of the 1990s, a functional specialization of the large centers took place in the Urals - as in other polycentric densely populated areas. In this context, Perm was able to slightly expand its position as an industrial center.

Until 1991, Perm was a closed ("forbidden") city to foreigners without a special permit because of its arms factories . However, the passage with the Trans-Siberian Railway was possible.

A criminological study from 2008 found that Perm had the highest crime rate in Russia.

The winters in Perm are mostly cold and frosty, the average temperatures are between −15 degrees and −20 degrees Celsius. On average there is 55 centimeters of snow.

Headquarters of the energy supplier TGK-9

Lukoil , currently Russia's largest oil company , is based in Perm. Aircraft turbines are produced in the city , as well as telephones , textiles , bicycles and power saws . There are also large industrial companies in the chemical , wood processing and electronics sectors .

The major companies in the region include the Permskie Motory engine building factory (formerly Perm engine building complex ) and the Motowilichinskije zavody armaments group , one of the most important manufacturers of artillery and tank cannons . The largest Russian bicycle manufacturer Forward also operates a plant in Perm. In addition, several large companies with foreign participation have their headquarters in the Permian. a. the cleaning agent manufacturer Henkel , the confectionery manufacturer Nestlé and the Russian plants of the largest brewery group in the world AB InBev . The IT industry, which now employs around 18,000 people, is also becoming increasingly important. a. in high-tech startups such as the manufacturer of service robots Prombot . The telecommunications group ERTelecom , which ranks second in Russia for Internet connections, also has its headquarters in Perm. 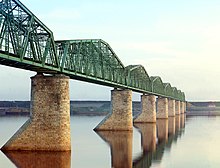 Perm is connected to the Trans-Siberian Railway and has its own airport . The 354 km long federal trunk road R242 connects Perm with Yekaterinburg , the center of Sverdlovsk Oblast . Other important highways lead from here to Kazan and via Kirow to Kostroma ( R243 ). The city's local public transport is carried out by the Permawtotrans . It operates tram , trolleybus and bus lines in the city.

The city has an opera , a theater and a famous puppet theater . Other cultural institutions in the city are the Gorki - Library (about two million books), the state Perm circus (with 2,000 seats), a planetarium and a zoological garden. 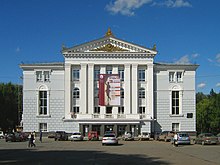 The Perm Academic Opera and Ballet Theater PI Tchaikovsky, which is one of the most important in Russia alongside the Bolshoi Theater and the Mariinsky Theater as well as the Academic Opera and Ballet Theater Novosibirsk , is home to an internationally important ballet troupe , in which numerous Dancers known to Russia have been trained or are teaching. Very extravagant and modern dance theater was created here. Since 2011 Teodor Currentzis has been the music director of the Perm Opera House, which he has given an international reputation.

Furthermore, the State Art Gallery Perm has existed in the former cathedral of the city since 1922 , in which mainly valuable wooden sculptures, but also paintings from the 15th to 18th centuries are exhibited (including pictures by the painters Ilya Repin , Ivan Schischkin and Ivan Kramskoi ).

In a large local museum there are 360,000 exhibits from the history of the city of Perm, mainly documents from the 16th and 17th centuries.

A rural property near the city served as a model for an important plot in the novel Doctor Schiwago by Boris Pasternak . Because of the virtually identical appearance and popularity of the novel, it is now a well-known tourist attraction.

From 2008 to 2013, the Moscow gallery owner Marat Gelman headed the city's Museum of Contemporary Art (Музей современного искусства). The works of art exhibited there, and in particular the sculptures displayed in the city's public space, at times led to very controversial debates.

The Folklore and Open-Air Museum Chochlowka, opened in 1980, is located a good 40 km north of the city on the right bank of the Kama reservoir .

State Institute of Art and Culture in Perm

Established in 1916, Perm State University is the oldest university in the Urals region. However, the largest educational institution in the city is the Technical University with over 11,000 students.

The young women's soccer team Zvezda 2005 Perm , which was founded in 2005, played in the UEFA Women's Cup just three years after it was founded and reached the final in spring 2009 . The football club Amkar Perm , founded in 1993, took part in the Russian premier league from 2003 to 2018 .

→ Main article : List of personalities of the city of Perm

Administrative division of the Perm Krai