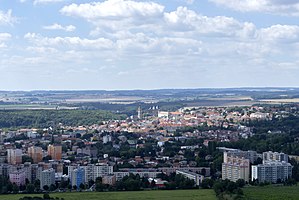 Kutna Hora. In the foreground the new town, in the middle of the picture the monastery and cathedral of St. Barbara

Kutná Hora ( pronunciation ? / I ; German Kuttenberg ) is a town in the Czech Republic in the Central Bohemia region with about 20,000 inhabitants.

It was founded in the 12th century as a miners' settlement. Towards the end of the 13th century, it developed into one of the liveliest and most prosperous cities in Bohemia . Kuttenberg achieved this through silver mining and the famous minting of the Prague groschen . It was the second largest city in Bohemia after Prague until a large part of the population of Kuttenberg was murdered in the course of the Hussite Wars in the 1420s. After that, the city lost much of its importance. Today, the old town of Kutna Hora belongs to the UNESCO - World Heritage Site .

Kutná Hora is about 70 km east of Prague and 7 km south of the Elbe (Labe) near Kolín on a plateau above the valley of the Vrchlice river , which is dammed above Poličany in the Vrchlice dam . The Czech name refers to the mountain that rises more gently from the east and drops sharply to the west ( Kutná Hora = mountain in which digging is carried out (here for ore )).

The following districts belong to the town of Kutná Hora: 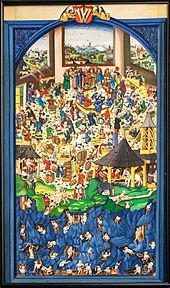 Illustration of silver mining from the 15th century

Church of St. Jacob and Archdeanate, seen from the Hradek

King Wenceslas II gives the Kuttenberg mine its mining regulations.

Share of the United Agricultural Sugar Factory in Kuttenberg from 1865

In 1142 the Cistercian order founded the Sedletz monastery , to whose lands the area of ​​today's Kuttenberg belonged. According to legend, a monk is said to have discovered the first silver while working on a vineyard . He marked the place with his cowl, from which the later name Kuttenberg is said to have originated. The derivation of the Middle High German word kutta (pit), which refers to mining, is more likely .

The monks came from the Abbey of Waldsassen in the Upper Palatinate , which is why they settled German miners from 1260 after the discovery of this silver deposit. The first written mention of Cuthna Antiqua (Alt Kutten), which became the German foundation, is known from the year 1289. The ore discoveries triggered a real silver boom. Within a very short time, numerous miners settled in the formerly rural area. The shaft operation started almost directly in the city; two Göpelwerke in the city area still remind of this today.

As was typical of mining settlements, the settlement grew rapidly and without a plan. King Wenceslaus II of Bohemia granted the city the right to mint after 1300 . The Prague groschen was minted here until 1547 . Kuttenberg developed as the country's "treasure trove" and, due to the number of inhabitants, became the second most important Bohemian royal city after Prague .

Albrecht von Habsburg besieged the city in 1304. This led to an accelerated construction of the city fortifications, which are still partially preserved today. The city's wealth at the time is reflected in the sacred buildings that are still preserved today . A document from 1327 with a list of the members of the magistrate shows only German names. The Kuttenberg miner's song from 1414 is one of the oldest surviving German miner's songs.

Sedletz (1422) and Kuttenberg (1424) were sacked and razed by Hussite troops during the Hussite Wars , many residents were killed, whereupon the affluent, mostly German population, who had remained Catholic, gave up the city and emigrated.

It was not until 1470 that the place recovered without regaining its original meaning. In 1471 Vladislav Jagiello was crowned King of Bohemia and in 1485 the Kuttenberg Religious Peace, named after the city, was concluded between Utraquists and Catholics of Bohemia . The Kuttenberg Bible (Bible kutnohorská) was created in 1489, the second oldest printed Czech-language complete edition after the Prague Bible from 1488. The oldest surviving residential buildings date from that time.

In the middle of the 16th century the deposits ran out; the silver mining was severely cut back, the minting of the Prague groschen was stopped and the city lost its importance for Bohemia. A total of around 2,500 tons of silver were mined between 1290 and 1620. From the year 1627 it came up with the settlement of Jesuits to recatholicization the mostly Hussite Utraquist population.

In 1757, after the Battle of Tabor Mountain near Prague in the Seven Years' War, the city's right to mint was revoked.

The rebuilding after two city fires in 1770 and 1823 changed the cityscape; At the end of the 19th century, as part of the then up-and-coming Czech national movement , the first efforts to protect monuments were made. Until the First World War Kutná Hora was a garrison of the KuK Austro-Hungarian Army . In 1914 the Bohemian Infantry Regiment No. 21 (Staff, III./IV. Battalion ) was stationed here. On April 22, 1944, the NPEA Bohemia was set up in the city barracks and in the Jesuit college .

In 1961, Kutná Hora became a city monument reserve. In 1995 it was added to the list of UNESCO cultural monuments.

Central nave of the Church of the Assumption

The historic city center was declared an urban monument reserve in 1961 .

The Cathedral of St. Barbara 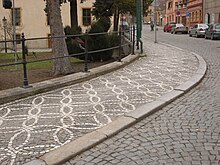 On the last weekend in June, the two-day medieval festival Royal Silver Plating (Královské stříbření) is held every year.

In 1870 Kutná Hora was connected to the railway network , after which there was restrained industrialization. At that time, the tobacco factory in the Sedlec district was built, which is still attached to the Gothic church today.

The mining of lead and tin ore that began in World War II ended in 1991.