This article collects scientific terms that have a certain bizarre or curiosity within the framework of valid biological nomenclature rules . The naming in biology is clearly regulated by various internationally valid regulations and agreements. In works such as the International Rules for Zoological Nomenclature , the Nomina Anatomica or the International Code of Botanical Nomenclature, it is specified when a scientific name is legal and when it is not accepted.

There are always creative names with a certain "entertainment value". This can be due to the selection of the name (naming it after a music group, a film, etc.), the length of the name, its letter composition ( palindrome , many vowels ) or other properties. 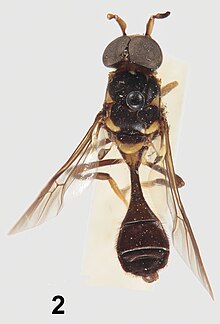 First and last in the alphabet

Palindromes are words that can be read from the back and the front with the same meaning.

The naming of species after important people is quite common in biology. In the past, mainly important researchers were honored in this way, later also politicians, musicians, artists and film stars. The following names are particularly unusual because they have made the choice of people according to special characteristics of well-known personalities.

Names of fictional people and beings

From the world of legends and fairy tales

Forces of evil and death

Names based on characters from books, films and television

From the novels by JRR Tolkien

Due to the popularity of JRR Tolkien , the author of the Lord of the Rings , many animals have been named in his honor by scientists. In 1978, Leigh Van Valen in particular named a large number of mammals from the Paleocene after characters and terms from Tolkien's fictional world Middle-earth .

For the unlinked characters, see the article Characters in Tolkien's World .

Often it is similarities with genitals that influenced the naming. 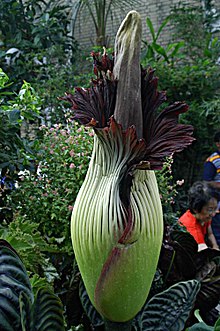 Other references to sex

This list is only a small selection of names, many more can be found on: