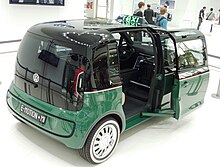 The VW Milano is a taxi - prototype , which at the 2010 Hannover Fair as part of the New Small Family was presented. It is based on the VW space Up! and VW e-up! .

The vehicle is intended as a study for future vehicles that are to be used as taxis. It is powered electrically, the energy is stored and carried in a lithium-ion battery , which is housed in the underbody of the car. With its 85 kW engine, it should have a range of up to 300 km, depending on the driving style. In the interior, some features of taxis such. B. in New York or Mexico . The vehicle, for example, has a touchscreen with which the passengers can observe the route or adjust the air conditioning . In addition, the taxi does not have a passenger seat, instead luggage can be placed in the front next to the driver. There is therefore no need for a large trunk. The green and black color scheme is based on the design of the taxis in Milan .

Based on the Milano study, further taxi studies based on the design of the taxis in Berlin and London were presented in 2010 .