The VW Touareg (Type 7L) is a sport utility vehicle of the superclass of Volkswagen has been v after. a. Named the Tuareg people living in the African Sahara and came onto the market in autumn 2002.

The Touareg platform was developed together with Porsche and therefore also forms the basis for the Porsche Cayenne, which was presented at the same time, and, since autumn 2005, for the Audi Q7 .

In autumn 2006 the Touareg underwent a facelift , which is visually particularly noticeable due to the brand-typical "coat of arms grill". Technically, some equipment was added and over 2000 components were replaced or improved.

In the course of the facelift in November 2006, the front section and the rear lights were changed. In addition, all models got new seats and a few additional extras.

In November 2009, the model range was reduced to a V6 petrol engine and a V6 diesel engine in three trim levels. The second generation was presented on February 10, 2010 .

Safety and comfort-oriented equipment is optionally available. Here is an excerpt:

An external spare wheel was also available in emerging markets

So far, the special models Touareg Kong , Touareg Kong SUN & AIR and, on the occasion of 250,000 Touaregs produced, the Exclusive Edition model, limited to 999 copies worldwide .

The special model North Sails was recently available. The model is available with all engines and is characterized by a special interior and various logos and logos from the sail manufacturer.

The top engine is the W12 engine from the VW Phaeton . It was initially included in the range in August 2004 (for the 2005 model year) under the designation W12 Sport as a model limited to 500 copies, produced until November 2005 and from November 2005 instead offered in the W12 Sport Edition and W12 Executive versions.

With the facelift in November 2006, both variants were dropped in favor of the W12 Individual and the W12 R-Line . Common to all variants is the standard air suspension and an exhaust system with two round double tailpipes. For the comfort variants W12 Executive and W12 Individual, this is the only external distinguishing feature compared to Touaregs with different engines. The sports versions W12 Sport Edition , W12 Sport and W12 R-Line also differ in their modified bumpers, widened wheel arches (not W12 R-Line ), 20 "wheels and sports seats.

From April to November 2009, a BlueMotion Technology package was offered for the Touareg in conjunction with the V6-3.0 TDI engine with an output of 165 kW (225 hp) . Some modifications have been made to reduce emissions and fuel consumption. This includes, among other things, an adapted engine management system, different shift points of the automatic transmission, a longer axle ratio, an efficiency-improved alternator and aerodynamic measures in the form of a sports chassis with a lowering of the body by around 25 millimeters. In addition, tires with optimized rolling resistance and an electronic energy management system are used (e.g. the vehicle battery is only charged when the engine is overrun). According to the manufacturer, the DIN consumption (combined) could be reduced by around one liter per 100 kilometers compared to the Touareg variant with 176 kW (240 PS).

The automatic transmission was optionally available for the 3.2 V6, 2.5 TDI and V6 TDI models; it was standard equipment for all other models. All diesel engines sold in Germany from model year 2007 were equipped with a diesel particulate filter as standard , abroad models without a catalytic converter were also on offer. Up to model year 2007 it was possible to retrofit with a combined City-Kat- / DPF-System (without Kat- / DPF-Additive) in order to receive the green inner city badge (4).

All variants of the Touareg I were equipped with permanent all-wheel drive and variable power distribution, an electronically controlled central differential and an additional reduction gear (reduction stage). In normal operation, the central differential automatically distributes the engine power to both axles (4XMOTION) via a multi-plate lock, to the front axle via a transfer case. The gear reduction stage (reduction) for driving off-road, snow, etc. can also be switched on manually by the driver via a switch. It enables the maximum driving force, in the field or on unpaved roads with lower speed. In addition, the central / center differential can be permanently locked, resulting in a fixed drive distribution (50:50). Optionally (until 11/2009) there was another, lockable rear axle differential and an electrically unhookable stabilizer (coupling rod). This increases the propulsion in the field, in particular the approach with a caravan or boat, or the ability to twist on unpaved surfaces. Also up to 11/2009 the Touareg I was still watertight up to approx. 590 mm (factory specification for air suspension) fording depth (intake duct height 900 mm), u. a. thanks to double-lip door rubbers and a higher air intake duct in the engine compartment.

1 not on the German market, only available in certain EU countries.

Jutta Kleinschmidt in the VW Race Touareg on the way to the start of the Dakar Rally , Paris 2005

In the German registration statistics of the Federal Motor Transport Authority , the Touareg ranked as follows in comparison with the competition: 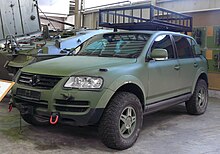 Prototype of the VW Touareg Military

As part of the tender for Protected Command and Functional Vehicles , Class 1 of the Bundeswehr , Volkswagen participated in the development of a military vehicle for the first time since the VW Iltis with a modified Touareg . In contrast to the production vehicle, the 5.3 t heavy Touareg-Military (in-house "Ferret") has a heavy-duty chassis from Farmington Automotive GmbH, is protected against hand weapons and mines and can be equipped with a weapon station. The test vehicle is powered by a 3.0 l V6 TDI engine with 165 kW and reaches a top speed of 160 km / h. According to VW, a 230 kW variant is also available. However, the vehicle did not meet the requirements in an initial test and was withdrawn from the selection process by VW in November 2007.