Hohen Neuendorf is a town in the Oberhavel district in the state of Brandenburg . The city, with over 26,000 inhabitants, is located on the Havel and borders directly on the Berlin districts of Frohnau and Heiligensee in the Reinickendorf district . Hohen Neuendorf has been one of the fastest growing places in Berlin's bacon belt since the 1990s . On March 28, 2019, the city ​​council decided that the city should in future be known as the “city of bees”.

Hohen Neuendorf stretches from the Havel (developed as the Oder-Havel Canal ) in the west ( Pinnow , Alt- Borgsdorf and Niederheide; see also Zehdenick-Spandauer Havelniederung ) to the foothills of the Niederen Barnim in the east ( Bergfelde district ). The city lies on the western border of the Barnim Nature Park - Bergfelde is in the Nature Park, Hohen Neuendorf, Borgsdorf and Stolpe are outside.

The Berlin district Frohnau in the Reinickendorf district borders directly on the city limits. The municipality of Birkenwerder is almost enclosed by the districts of Hohen Neuendorf.

According to the main statute of the city, Hohen Neuendorf is divided into the following districts: and residential areas

From the beginning to industrialization 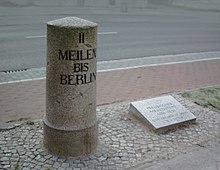 The first traces of settlement in the area of ​​today's Hohen Neuendorf can be traced back to the Bronze Age according to the list of archaeological monuments in Hohen Neuendorf . There were also settlements here in later phases.

A rapid development of the village began with the construction of the " Nordbahn ", the railway from Berlin to Neustrelitz , in the last quarter of the 19th century. The establishment of the “Stolpe” stop in 1877 - at the endeavors of the then more important neighboring village of the same name - subsequently led to the emergence of a small colony on today's southern edge of the city. A settlement also developed around the Hohen Neuendorf stop , which was set up at the same time . While Stolpe hardly changed in its agricultural character due to the transport links , Hohen Neuendorf developed into a commuter community . The colony grew both to the west (Stolper Straße) and parallel to the railway to the north (Berliner Straße) and there with the old village.

In 1919 the construction of the "Colonie am Wasserturm " began as a war- damaged settlement on behalf of the then rural community of Hohen Neuendorf. It was carried out by the state-owned Prussian Landgesellschaft Eigen Scholle Frankfurt / Oder . Later the place expanded to the east beyond the area of ​​the railway line. In the course of the route conversion for the operation of the S-Bahn , the two stops at Hohen Neuendorf and Stolpe were replaced by the new Hohen Neuendorf station in 1924.

With the formation of Greater Berlin in 1920, the Berlin urban area expanded in the north to Frohnau , and Hohen Neuendorf became a direct suburb of Berlin. Hohen Neuendorf bought Niederheide from the state forest in 1921 and in 1933 an area south of Stolper Strasse from the municipality of Stolpe . The planned settlement was only partially implemented. Most of the parcels off the main road remained undeveloped, especially in Niederheide.

On April 21, 1945, Polish and Soviet troops reached Hohen Neuendorf. In a brief exchange of fire, three buildings were destroyed at today's roundabout in the south of the city. That was the only destruction in the place during the Second World War.

Walter Pott became the first elected mayor after the war .

With the construction of the Berlin Wall on August 13, 1961, the road and rail connections to West Berlin bordering south were interrupted by the GDR . From November of the same year, the S-Bahn ran on a partially new route via Blankenburg to Berlin. The old road from the former Stolpe station to Bergfelde was interrupted by the new railway systems. To compensate for this, a paved road connection to Bergfelde was created via a railway bridge.

After the wall came down

The fall of the Berlin Wall on November 9, 1989 and the demolition of the border installations to Berlin made it possible to reopen the Berliner Straße ( B 96 ) to Frohnau on February 17, 1990. The direct S-Bahn connection Hohen Neuendorf - Frohnau was reopened on May 31, 1992 recorded .

On December 6, 1993, the neighboring communities Bergfelde and Borgsdorf merged with Hohen Neuendorf. In contrast to many municipalities in the Oberhavel district, local advisory boards were not introduced. The residents of Birkenwerder voted against a merger in a referendum. The municipality of Stolpe was incorporated into the city with effect from October 26, 2003.

At the end of 2006 the action alliance “Northern Railway Communities with Courage” was founded. The non-partisan, open citizens' forum is committed to a strong civil society and lively local democracy in order to actively counter the rise of right-wing extremist ideas in the middle of society. Around 30 associations, parties, administrations, schools, churches and other institutions have so far joined the initiative. The municipalities of Mühlenbecker Land and Glienicke / Nordbahn have now joined the alliance originally founded in Hohen Neuendorf and Birkenwerder .

In May 2007, the Bernsteinsee (also known as Veltener Autobahnsee , which had previously belonged to Borgsdorf (Pinnow district) , as it was created in the 1970s through sand mining as part of the expansion of today's A24 autobahn ) was handed over to the city of Velten in exchange for meadowland . 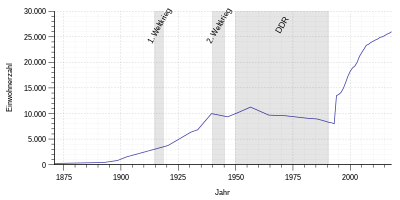 Population development of Hohen Neuendorf. Above from 1624 to 2017. Below an excerpt from 1871

In accordance with Section 6 of the Brandenburg Local Election Act, the city council has 32 members and the full-time mayor in a municipality with more than 25,000 inhabitants. In the 2014 election there were still 28 seats. The local elections on May 26, 2019 led to the following result with a turnout of 66.2%:

In the runoff election on November 29, 2015, Apelt prevailed against incumbent Klaus-Dieter Hartung with 51.5% of the valid votes and a turnout of 44.2%. He was elected for an eight year term.

Between 1992 and 2017 there was a partnership with the French municipality of Maing , Département Nord . The partnership had previously not been actively maintained by either side.

In connection with a planned redesign of a city center, numerous buildings, including the oldest in Hohen Neuendorf, were demolished in 2003/04: Büdnerhaus Karl-Marx-Straße 8 from 1795 and the well-known " Alte Krug ", which was first mentioned in 1799 . Other well-known buildings, such as the “ Villa zum Weißen Hirsch” (the town's former construction office from the 1920s) and the youth clubhouse , fell victim to the demolition.

The Havelbaude is a known tourist restaurant in Niederheide to which a sport boat harbor and a - throw belong.

In Bergfelde there are a large number of companies and businesses, especially in the construction and handicrafts, for services as well as hotels and restaurants. There are various shops in the city, for example the trade and service center in Hohen Neuendorf and a garden market in Borgsdorf.

The regional institute for apiculture is based in Hohen Neuendorf. In Borgsdorf there is a state forest ranger's office for the Brandenburg Forest .

The B 96 crosses the city from north ( Oranienburg ) to south ( Berlin , district Frohnau ). In addition, the B 96a runs in the direction of Berlin-Blankenfelde through the Bergfelde district. The closest motorway junctions are Birkenwerder on the A 10 (northern Berliner Ring) and Stolpe on the A 111 .

All parts of the city are served by the Oberhavel Verkehrsgesellschaft bus routes:

The Berlin – Copenhagen long-distance cycle route and the Havel cycle route run through the districts of Hohen Neuendorf and Borgsdorf.

There is a lot of freight and seasonal excursion traffic on the Havel ; Since the 1970s, Hohen Neuendorf is from the commercial shipping not started. However, the Havel provides an important link for supplying the Hennigsdorf steel and rolling mill with coal and raw materials. The Havelbaude has retained its importance for the sport shipping industry . 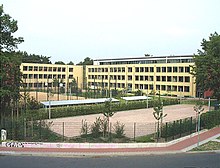 There are various schools in the city, most of them are in the Hohen Neuendorf district:

In Bergfelde, plans are underway for the construction of a new sports field for the soccer games of SV Grün-Weiß Bergfelde .

The sports field in Borgsdorf is used by local clubs and the primary school. The square was opened in August 2002 after an extensive redesign. The first men's soccer team of FSV Forst Borgsdorf plays in the regional league in the 2017/18 season.

The Stolper Heide golf club in Berlin is located in the Stolpe district and has two 18-hole golf courses. The older Westplatz (opened in 1997) was designed by Bernhard Langer , the Ostplatz (opened in 2003) by Kurt Roßknecht.

The SSV Hohen Neuendorf has been organizing the autumn run since 2000 at the beginning of November with distances from 400 m (children's run) to 10.5 km. With around 1000 participants, the run is the largest sporting event in the district.

Cities and municipalities in the Oberhavel district