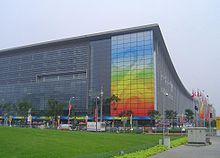 Surprisingly, the Italian Matteo Tagliariol won the title in the final against the French Fabrice Jeannet . After Jeannet's 2-0 lead in the meantime, Tagliarol was able to pull away to 8: 3 and finally set the decisive fifteenth goal to 15: 9. José Luis Abajo won the first fencing medal ever for Spain, as he made the first point after 56 seconds in the extension of the fight for third place (7: 7 after three rounds of regular fighting time). The Swiss Michael Kauter made it to the last sixteen, but there he was defeated by the Dutchman Bas Verwijlen . There were no Germans or Austrians at the start.

Not surprisingly, the French Degen team defended their Olympic victory and beat Poland 45:29 in the final. The brothers Fabrice Jeannet and Jérôme Jeannet and Ulrich Robeiri thus achieved the ninth title for France in this discipline. Bronze went to Italy for individual Olympic champion Matteo Tagliariol . For the first time since 1952 there were no German fencers at the start.

Benjamin Kleibrink won the first gold medal in fencing for the German Olympic team since 1992. In the final he defeated his opponent Yūki Ōta quite clearly with 15: 9, and in the semifinals he even defeated the Chinese Zhu Jun with 15: 4. The Austrian participant Roland Schlosser failed in the second round, the German favorite Peter Joppich was defeated in the quarter-finals to the finalist Yūki Ōta.

Many favorites, including the German world number one Nicolas Limbach , failed prematurely, so that none of the top six in the world rankings were still in the semi-finals. Mihai Covaliu from Romania, the 2000 winner, also missed the finals. In this, the Chinese Zhong Man fought against Nicolas Lopez from France with 15: 9, the first fencing gold medal for China. There were no Austrians or Swiss among the participants.

The French fencers won the team's second title 45:37 against the United States. The battle for third place, where Italy defeated Russia 45:44, was a little closer.

Valentina Vezzali has already won her fifth Olympic gold medal and her third in a row in foil singles. So she now leads the ranking of the most successful female fencers at the Olympic Games. After trailing 4: 5 in the final against South Korean Nam Hyun-hee , who was the only one able to prevent the Italians from completely winning, she was able to turn the battle around and won with a goal four seconds before the end with 6: 5. The three German participants Katja Wächter , Carolin Golubytskyi and Anja Schache were eliminated in the quarter-finals, the second round and the second round.

In the only team final with German participation, Katja Wächter , Carolin Golubytskyi , Anja Schache and Melanie Wolgast had to give up their hopes for a medal in the quarter-finals when they lost 31:35 against Hungary. In the battles for fifth place, however, they won twice and finally came fifth. Russia won the final; the team clearly won 28:11 over the United States.

Winning all three medals in a fencing competition, as the United States did this time , was last achieved by the German women on foil twenty years ago. Mariel Zagunis won the final with 15: 8 goals against Sada Jacobson . In the battle for third place, Rebecca Ward secured the complete set of medals for the USA with 15:14 goals against the Russian Sofja Velikaja . The only German starter, Alexandra Bujdosó , was eliminated in the second round .

Sports at the 2008 Summer Olympics

Fencing at the Olympics
Olympic champion in fencing
Interludes 1906