Brunson is considered the greatest poker legend of all time. He took the lead in the All Time Money List in 1976 and stayed at the top until 1984. In 1980, he was also the first player to win more than $ 1 million from live poker tournaments . His successes include ten bracelets at the World Series of Poker in Las Vegas , including two wins ( 1976 and 1977 ) in the main event . In addition, the author of various poker books secured a title at the main event of the World Poker Tour . Brunson played his last live poker tournament in June 2018 and ended his career as a professional player after more than 60 years.

His life's work was honored with a Global Poker Award at the beginning of April 2019 . As part of the 50th edition of the World Series of Poker , Brunson was named as one of the 50 best players in poker history in June 2019 .

Brunson was born in Longworth, a village of about one hundred people in Fisher County , Texas . He was the oldest of three children. With Longworth being a small town, Brunson regularly ran long distances to other parishes, making him a promising athlete. This gave him the opportunity to join the All State Texas Basketball team. Although he thought more of basketball than athletics, he joined the Texas Interscholastic Track Meet in 1950 . As a result, Brunson received several offers from colleges, but ultimately chose to go to Hardin Simmons University in Abilene . The main reason for this decision was that the university was located near his home town. As a result, Brunson suffered a serious knee injury while doing unskilled labor, which marked the end of his days as a promising young talent. The injury was so severe that his leg was in a cast for two years. Even today, Brunson sometimes needs a crutch to be able to move. Brunson then concentrated on his education and completed a master's degree in administrative education .

Even before the accident, Brunson occasionally played poker, namely the classic five-card draw variant . After the injury, he played more and more often, which meant that his earnings were enough for a living.

After successfully completing his studies, he took a job as a machine dealer. On the first day he was invited to a game of Seven Card Stud . He played very successfully and in under three hours won a month's salary. Brunson then realized that the game of poker was very lucrative and decided to become a professional player.

From Texas to Las Vegas

Brunson started his poker career in Fort Worth , the fifth largest city in Texas. There he played illegal games with a friend. The two then realized that they could make more money in bigger games and therefore traveled across the south of the country. They played in big games in Oklahoma and Louisiana , but also in Texas. The duo met professional players Thomas "Amarillo Slim" Preston and Brian "Sailor" Roberts on their tour . While Brunson's acquaintance was returning to Fort Worth, he teamed up with the two professionals. For a long time they risked their money playing poker, golf and, in Brunson's words, "pretty much anything". After accumulating a large sum of winnings, the three players tried their luck in Las Vegas , Nevada .

They threw their money together and gambled, but it wasn't until six years later that the friends made their first serious trip to Las Vegas and there they lost all their money, a six-figure sum. After that, they decided to end the partnership, but to remain friends. Brunson eventually settled in Las Vegas, Nevada.

Achievements in the World Series of Poker 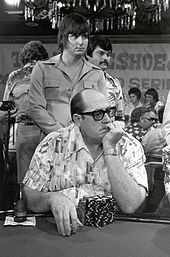 Doyle Brunson at the 1976 WSOP

After the trio split up, Brunson quickly became very successful. As early as 1976 he won the Main Event of the World Series of Poker (WSOP) in Las Vegas and was crowned poker world champion. For this achievement, Brunson received $ 220,000. A year later he defended this title and won two more individual tournaments. At the WSOP in 1978 and 1979 , he won two other side tournaments. This was followed by a long dry spell before he was able to win another tournament in 1991 . He won his last three events in 1998 , 2003 and 2005 . Subsequently, his appearances at the World Series became less frequent. In June 2018, Brunson announced that the No-Limit 2-7 Lowball Draw Championship of the 2018 WSOP would be the last tournament he will play. There he finished sixth again for just under 45,000 dollars and was then given a standing ovation .

Brunson won a total of ten tournaments at this event, which puts him together with Johnny Chan and Phil Ivey behind Phil Hellmuth , who has won 15 tournaments so far.

By the year 2018 , he came at the WSOP 37 times the money and earned prize money of more than three million dollars.

In addition to his success at the World Series , Brunson also drew attention to himself with other good results in other tournaments. So he won the Legends of Poker in 2004, for which he received over a million US dollars. Brunson finished fourth in the first WPT Championship event. In addition, despite his old age, he took part in various television events, such as High Stakes Poker , Poker After Dark and the National Heads-Up Poker Championship . Brunson is also one of the players who plays in the Bellagio in the Big Game with minimum stakes of $ 4,000 / $ 8,000 for millions.

Success as a writer

In 1978 his book Super / System: How I Made Over $ 1,000,000 Playing Poker was published (in German about Super / System: How I won over $ 1,000,000 in poker , ISBN 1580420818 ). After Brunson couldn't find a publisher, he published it himself. The book gave readers a glimpse into the mindset of a professional gamer. Brunson stated several times that the book probably cost him more money than he made with it, as the game of his opponents who read the book improved.

The book begins with a biographical chapter of Brunson's career and then turns to poker strategy . Super / System does not specialize in one game variant , but is dedicated to a large part of the known variations. In addition to Brunson, many equally professional players contributed to the book, for example David "Chip" Reese , Bobby Baldwin and the game theorist David Sklansky . In 2004 the sequel Super / System 2 appeared , which is essentially an updated version of the first part.

In addition, Brunson published the book According to Doyle (in German about Laut Doyle ) in 1984, which was reissued in 2003 under the title Poker Wisdom of a Champion (in German about The Poker Wisdom of a World Champion ). 2005 In addition, the book was published Online Poker: Your Guide to Playing Online Poker Safely & Winning Money (loosely translated Online Poker: Your Guide, online poker safe and lucrative to dispute ) which, as the title says, quite to the online poker prescribes.

Brunson met his wife Louise in 1960 and married her in August 1962. Louise became pregnant and that same year Brunson discovered a tumor in his throat. The surgery found the cancer to have spread and the surgeons found it to be incurable. They said that an operation could prolong Brunson's life long enough for him to witness the birth of his child. After the operation, however, no trace of the carcinoma could be found. The doctor thought this healing was a miracle. Brunson attributed the healing to the prayers of his wife's friends. Louise developed a tumor of her own shortly afterwards. As with her husband, the ulcer was gone after her operation. In 1975 her daughter Doyla was diagnosed with scoliosis , but her spine healed completely within three months. She died at the age of 18 after taking too much potassium because of a heart valve disease . During the following year Brunson read much Christian literature and turned to Christianity .

On December 14, 2005, the commission signed a document to enforce subpoenas from experts investigating Brunson's unwanted offer to buy out the World Poker Tour organizer , WPT Enterprises , for a high price - well above market value. Shortly thereafter, the commission argued that a public relations firm, hired by Brunson, and a website he sponsors had advertised the offer publicly. The commission claimed that the publication of the offer, which received widespread media coverage, caused the share price of WPT Enterprises to soar.

When asked for details, Brunson and his attorneys immediately stopped responding to WPT Enterprises and the media. Instead, Brunson withdrew from the negotiations after the bid was submitted. When WPT Enterprises broke off contact with Brunson and his attorneys publicly, share prices fell sharply and cost investors tens of millions of dollars in market value. The offer eventually expired due to its clauses.

The commission was formally investigating whether Brunson's offer and publication violated federal corporate laws, particularly the anti-fraud clauses of the Securities Exchange Act of 1934. As part of the investigation, the commission called Brunson's attorneys and took documents and testimony. Brunson exercised his 5th Amendment right not to incriminate himself and refused to testify. He forbade his lawyers to testify on critical aspects of the offer, citing the obligation of confidentiality through the lawyer-client relationship and the so-called " work product doctrine " (which forbids the disclosure of documents created in connection with legal proceedings to the other party) and obliged them to withhold certain documents. However, the investigating authorities tried to circumvent this right on various grounds, including the fact that confidentiality does not apply if the contact with a lawyer is used to prepare a crime. They wanted to force Brunson's company to hand over the documents and testimony. No charges were brought. The proceedings were closed in 2007.

Winner of the World Series of Poker Main Event

Members of the Poker Hall of Fame