The World Series of Poker , or WSOP for short , is a series of poker tournaments that take place in Las Vegas once a year over a period of a good month . The main tournament , a No Limit Hold'em variant with a buy-in of US $ 10,000 , is considered the most prestigious poker tournament ever, so the winner is known as the poker world champion. You can play from 21 years of age.

The Binion's Horseshoe in Las Vegas was 1970-2004 scene of the WSOP. Since 2005, all tournaments have been held at the Rio All-Suite Hotel and Casino . In honor of 35 years of WSOP history, the 2005 Main Event final table was held at Horseshoe.

In 2008 the WSOP was pushed forward by a few weeks due to the summer heat in Las Vegas. Another major change was the postponement of the main event final table to November. This change was made due to considerations of the broadcasting television station ESPN . 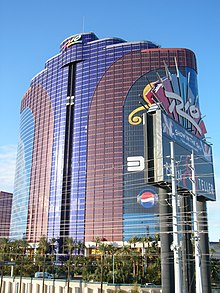 A tournament hall at the 2008 WSOP

Any player who wins during the WSOP either the Main Event or any of the tournaments gets paid not only the respective winnings, but also receive a valuable bracelet from gold . This bracelet, which is called a bracelet in English , has the shape of a wristwatch , but instead of a dial it bears a gold emblem of the World Series of Poker . The bracelets are very popular among players because of this for many gem not the material but the ideal value counts. The ideal value is, among other things, that such a bracelet says that the player who wears it was able to prevail among several hundred or even thousands of participants in a tournament.

How coveted the bracelets really are is shown by the record hunt that has been going on for years between some of the most famous players. This record is about which player has won the most bracelets in their career to date. This record currently stands at 15 bracelets and is held by Phil Hellmuth (see also: List of multiple bracelet winners ). The youngest ever winner of a bracelet was Steve Billirakis at 21 years and 12 days.

Overview of the tournament chips produced and used exclusively for the WSOP. The last version of the chips used is shown.

While the Horseshoe Casino used in-house tournament chips from 1970 to 2003, a series exclusively produced for the WSOP was used for the first time in 2004. This was made by the chip manufacturer Bud Jones and started with the values ​​25, 100, 500, 1000, 5000, 10,000 and 25,000. After the WSOP moved to the Rio in 2005, the design of the chips from the Horseshoe was largely adopted, but not the chips themselves, which resulted in a new series being produced and expanded again in the following two years (including a secondary set) or . has been adjusted (coloring, redundant values). The highest value in this series was the 100,000 chip last. In 2007, the chip producer Paulson was commissioned with the production of the new series and thus brought a completely new primary set into play, including a secondary set for side events and in case the main events ran out of primary chips. The use of primary and secondary sets does not always follow a consistent logic. Chips from the Bud Jones series were also occasionally used. Due to the increasing number of participants, ever higher values ​​had to be introduced. The current highest value is the 5,000,000 chip. The denominations and colors used for individual values ​​change again and again due to decisions made by the tournament management or feedback from the players. In 2017, 245,514 chips were in circulation during the main event.

Final table at the 2010 Main Event
* Johnny Moss was chosen by the other contestants.

Since 2004, the tournament management has also given a Player of the Year Award to the player who has collected the most points across all tournaments of the annual event. The calculation of the scores varies from year to year and also includes the results of the expansions . 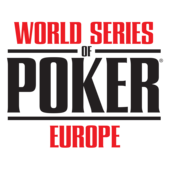 Due to the COVID-19 pandemic , the World Series of Poker Online will take place for the first time from July to September 2020 on the WSOP.com and GGPoker platforms, a complete online tournament with 85 events.