Claudia Michelsen at the Berlinale 2017 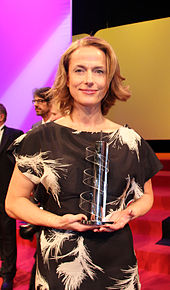 2012 at the awarding of the Hessian Film and Cinema Prize

Claudia Michelsen (born February 4, 1969 in Dresden ) is a German film and theater actress .

Claudia Michelsen is the daughter of a dentist and the composer Udo Zimmermann , whom she only met when she was 15 years old. Her mother's future husband adopted her and gave her his name. She was interested in the performing arts, but also in life outside the GDR. She had considered becoming a radio officer in the merchant fleet, but decided, together with her friend Christine Hoppe , to train at the Ernst Busch Academy of Dramatic Arts in Berlin . During her student days she made her debut in Rainer Simon's play The Ascension of Chimborazo (1989). After completing her training, she received an engagement at the Berliner Volksbühne . She starred in the 1991 Godard film Deutschland Neu (n) Null . In 1995, she was awarded the Max Ophüls Prize for her role in the television game That Never Creates the Best Young Actress .

In 2008 she appeared alongside Devid Striesow in the role of the Stasi prisoner Bettina in the Grimme Prize- nominated drama 12 entitled: I love you . From 2009 to 2012 she played the main female role of Commissioner Ann Gittel in the Friday crime thriller Flemming broadcast by ZDF at the side of her colleague Samuel Finzi .

Since 2013 Michelsen has been investigating Doreen Brasch as chief detective in the ARD television series Polizeiruf 110 in Magdeburg . Sylvester Groth was her partner in the first five films . The first episode ran on October 13, 2013. Michelsen was in front of the camera for the SRF thriller drama Strength 6 alongside Pasquale Aleardi in the same year . The film refers to the history of the sinking of munitions in Swiss lakes after the Second World War. Michelsen plays a geologist whose friend dies during a dive from the pressure wave of a hand grenade underwater.

The actress has been a member of the jury of the Michael Althen Prize for Criticism since it was founded in 2012.

Claudia Michelsen married the German director Josef Rusnak and moved to live with him in Los Angeles in 1995 , where their daughter, the German-American actress Lisa Rusnak, was born in 1998. After their divorce in the summer of 2001, Michelsen returned to Germany. From 2002 to 2013 she lived with the Swiss actor Anatole Taubman , the father of her second daughter, Tara Taubman (* 2004). Michelsen lives in Berlin.