Champniers-et-Reilhac , Occitan Champs Niers e Relhac is a French municipality with 455 inhabitants (at January 1, 2017) in the Dordogne in the region Nouvelle-Aquitaine (before 2016 Aquitaine ). It belongs to the Arrondissement of Nontron and the canton of Périgord Vert Nontronnais (until 2016 Bussière-Badil ). The responsible community association is the Communauté de communes du Périgord Nontronnais . The inhabitants are known as Champniérois or Champniéroises .

The place name Champniers is derived from the Occitan Champs niers , French champs noirs . Black floors are meant , i.e. H. Good quality floors. The place name Relhac or Reilhac probably comes from a Gallo-Roman proper name Regilius or Regulius , with the suffix -acum as a place name or claim to ownership.

The Saint-Paul church in Reilhac

The commune of Champniers-et-Reilhac borders the Haute-Vienne department . Reilhac is the northernmost village in the Dordogne department. It is 18 kilometers to Montbron in the Charente department in the west, and only 5 kilometers (as the crow flies) to Saint-Mathieu in the north-northeast. Nontron in the southwest is 21 kilometers away.

Champniers-et-Reilhac is surrounded by the following five municipalities: 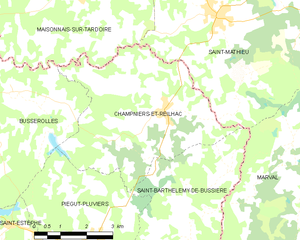 The north-south axis D 675 from Nontron to Saint-Mathieu runs through Champniers . The secondary road D 111 / D 117 creates an eastern cross-connection in the direction of Cussac , the D 110 leads west to the district of Reilhac and then on to Maisonnais-sur-Tardoire. Busserolles is reached in the west via the D 90 .

The south-west of the municipality is drained by the Trieux , a left tributary of the Tardoire , towards the north-west. At the westernmost point of the municipality the Nauzon flows , a smaller right branch of the Trieux, which also functions as a border river to the Haute-Vienne department. In the upper reaches it merges into the Ruisseau de l'Étang Neuf , which forms the further course of the border. In the southwest there are also two smaller reservoirs, L'Étang des Petits Moulins and L'Étang Grolhier - the latter is an important bird sanctuary.

The general direction of drainage is to the west. 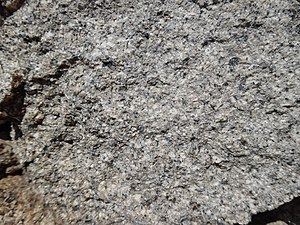 The municipality of Champniers-et-Reilhac is completely underlain by Variscan basement rocks of the north-western Massif Central . Mainly this is the Saint-Mathieu-Leukogranite with its fine-grained ( Champniers-et-Reilhac-Leukogranite - γ 2 ) and its coarse-grained facies (actual Saint-Mathieu-Leukogranite - γ 2M ). The coarse-grained facies at Les Juries contain north-north-west striking mica schists of the parautochthonous mica slate unit ( ξ 1 ) and at Les Fougères a pegmatite body turned in the north-west direction ( P ).

In the southwest the Piégut-Pluviers-Granodiorite is just exposed in its fine-grained marginal facies ( f γ 3M ) and in its coarse-grained normal facies ( γ 3M ).

In the fine-grained transition area of ​​the two granitoids there are also traces and lenses of paragneiss ( ζ 1-2 ) and migmatitic paragneiss ( Mζ 1-2 ) in between. The transition between the paragneiss and the granodiorite at Laubergie is interesting , which takes place over a distance of a good 100 meters very successively and concordantly to the northwest-striking foliation of the paragneiss.

The granitoids are of interference and partly blade that occurring micro granite corridors running through it. The preferred strike direction is north-northwest, but northerly, north-northeast and northeast directions also occur. At Chez Tendeau , an east-south-east trending quartz vein crosses the granodiorite. Faults and dikes are the result of late Variscan expansion tectonics.

The valleys of the Nauzons and the Trieux widen shortly before their confluence. Holocene alluvium - fine sands with quartz pebbles (formation Fy-z ) - was deposited in them .

The municipality has been an integral part of the Périgord-Limousin Regional Natural Park since 1998 .

In the municipality, the valleys of the Trieux , the Nauzon and the Ruisseau de la Francherie as well as the Étang Grolhier form an ecological protection zone (continental ZNIEFF type 1 - French zone d'interèt écologique, faunistique et floristique ). The protection zone is known in French as Vallées du réseau hydrographique de la Tardoire et du Trieux and is notable for its flora and the quality of its water.

Since 1979 the Étang Grolhier in the southwest has been designated as a 233 hectare nature reserve (French site naturel ) (the pond itself is only 22.4 hectares).

The Roman road from Périgueux to Poitiers once passed near Reilhac. A villa from the Gallo-Roman period was discovered in 1922 at the Étang des Petits Moulins on the southern edge of the municipality. Reilhac has a Romanesque church from the second half of the 12th century , and Champniers also has a Romanesque church from the 12th century. The square donjon of the former castle in Champniers has been preserved.

The population has generally been declining since 1962 (population loss of 34 percent), with a very sharp decline between 1968 and 1975.

With an area of ​​20.40 square kilometers, the population density is 22 inhabitants / km².

The mayor of Champniers-et-Reilhac has been the craftsman Daniel Védrenne, who is part of the DVD , since March 2008 .

As of December 31, 2013, 62 companies were based in the municipality, 35 of them in the trade, transport or services sector, 9 in agriculture, forestry or fishing, 9 in construction, 6 in industry and 3 in the administration, education, health care or sector Social.

Commons : Champniers-et-Reilhac  - Collection of images, videos and audio files
Municipalities in the Arrondissement of Nontron