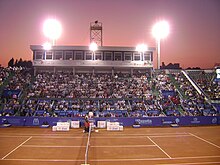 Center Court of the Arenele BCR

The clay court competition has been held in Bucharest since 1993 and is currently part of the ATP World Tour 250 . It was the follow-up event to the Cologne Open in Cologne. From the beginning, the tournament was mostly held in September, making it one of the last clay court events on the tour calendar. Since the 2012 season , the tournament has taken place in the spring before the French Open and has therefore been given a more attractive date.

The venue is the Arenele BNR . So far, no Romanian has been able to win the individual competition, but Victor Hănescu reached the final in 2007 ; in doubles, however, Andrei Pavel and Gabriel Trifu won the title in a purely Romanian final in 1998 ; Horia Tecău won from 2012 to 2014 and 2016 and Adrian Ungur and Marius Copil won in 2015 . In singles, only the Frenchman Gilles Simon was able to win the tournament more than once with three successes, in doubles Tecau won four times.

Co-organizer Ion Țiriac announced in 2016 that the tournament would take place in Budapest from 2017 .