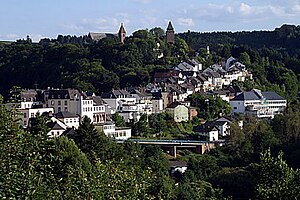 View of Kyllburg from the Annenberg

Kyllburg [ ˈkɪl- ] is a town in the Eifelkreis Bitburg-Prüm in Rhineland-Palatinate . It has been part of the Bitburger Land community since July 1, 2014 , until then it was the seat of the Kyllburg community , which was dissolved at the same time .

The city is a state-recognized health resort and designated as a basic center according to state planning .

Kyllburg lies between 275 (train station) and 375  m above sea level. NHN (sports field), has 920 inhabitants and is therefore the second smallest town in Rhineland-Palatinate after Kaub . The protection provided by mountain ranges that tower above the city and the surrounding water belt of the Kyll contribute to the particularly favorable climatic conditions.

Kyllburg is mentioned in a document at the beginning of the 9th century. According to a deed of donation dated July 16, 800, the couple Elmfried and Doda donated several lands located on the Kyllberg to the Prüm Abbey .

In 1239, Archbishop Theoderich von Trier had a larger castle, the actual Kyllburg , built as the corner and border fortress of Kurtrier in order to protect his area against the northern border of the Trier archbishopric and against the dynasts of Malberg . The castle, which is still partially preserved today, was partially replaced by a school building in 1912.

In order to cover the costs of this castle construction, Archbishop Theoderich sold the fiefdoms of Roßporten, which had fallen back through the death of Agnes von Malberg , with the approval of his Trier cathedral chapter for 200 pounds to the monastery of St. Thomas an der Kyll .

The immediate cause for the acceleration of the construction of the new larger castle was, as the Gesta Treverorum testify, the violence of the knight Rudolf von Malberg , who had seized the rule of Malberg. After her death he tried to use force to wrest the goods from the Cistercian convent of St. Thomas, not far from Kyllburg, that had been given to it by Agnes von Malberg. Rudolf feuded the monastery and all the nuns fled to Trier, where they went daily in processions to the cathedral and sang the two antiphons " Media vita in morte sumus " and " Salve regina mater misericordiae " in a loud pitiful voice during the service . As a result, the archbishop assists them against their restless neighbors. After the archbishop had defeated him by force of arms, he submitted. The new castle on the Kyllberge kept him in check. The Kyllburg subsequently proved itself as a bulwark against attacks against the electoral state.

Theodoric's successor, Arnold II (1242–1259), surrounded the castle and the adjoining houses with a solid wall in 1256. With the abbot Jofrid von Prüm he concluded a contract on August 16, 1256 because of their mutual fortifications.

With the buildings of Theodorich in 1239 and the extensions of Arnold in 1256, the Kurtrier country town "Kilburch" and "Kieleburch", fortified with strong walls and gates, was created. With its walls and market, it had the essential characteristics of a medieval town and was inhabited by castle men, guards, porters and citizens. With the construction of the wall, the citizens took on the obligation to protect this wall against attacks. The city had the obligation to maintain the city gates and city walls. In order to emphasize this task, a special order was issued later.

In the Peace of Campo Formio on October 17, 1797, Emperor Franz II, in his capacity as sovereign of the Habsburg hereditary lands, ceded his possessions on the left bank of the Rhine to France . As a result, the entire area on the left bank of the Rhine was annexed by France before it was incorporated into France by the Treaty of Luneville in 1801. In 1798 the entire previous constitution, government and administration were dissolved and a completely new one was introduced. What had become in France from 1789 to 1797 under heavy fighting and many atrocities, that was now implemented here in a few months and without noticeable struggle, namely the overthrow of the previous social constitution and the introduction of republican institutions. The left bank of the Rhine was divided into four departments. Kyllburg belonged from 1798 to 1814 to the Saar department with the main town Trier and was made the main town ( chef-lieu ) of the canton Kyllburg , as u. a. also Prüm , Daun and Gerolstein . The French brought the city the equalizing municipal constitution , which basically made no difference between urban and rural communities. Kyllburg, like all other cities, lost its city title, even if it again protruded beyond the places in the neighborhood by making it the capital of a canton .

A total of 78 soldiers from Kyllburg died in World War II , and 39 civilians were also killed in the city.

On September 15, 1956, the municipality of Kyllburg was again given the designation " city " by the state of Rhineland-Palatinate .

In 2011 the German Weather Service prepared an air-climate report. Due to the positive result, the city of Kyllburg will have the status of climatic health resort until the next inspection (2020) .

Changes in buyer behavior and demographic change did not stop at Kyllburg. After the last shop on the once renowned Hochstraße closed on January 12, 2012, the civil offensive Kyllburg dajeh, or “OK dajeh” for short, was founded with the aim of beautifying and revitalizing the two most important streets, Hochstraße and Bahnhofstraße. On October 25, 2012, a first round table with interested property owners met with the support of the Trier Chamber of Commerce . After a second round table they meet almost monthly in regulars' tables. The work of the civic initiative is reflected in regular art exhibitions and other program items.

Forms of the place name

The development of the population of Kyllburg, the values ​​from 1871 to 1987 are based on censuses:

The City Council in Kyllburg consists of twelve council members, who in the local elections on May 26, 2019 in a majority vote were elected, and the volunteer city mayor as chairman. Before 2014, the council members were elected in a personalized proportional representation.

The city colors are red and white.

Kyllburg train station. In the background the pedestrian overpass built in 2015 .

The Kyllburg train station is on the Eifel route Cologne - Euskirchen - Gerolstein - Trier . It is served by the following lines in local rail passenger transport (as of 2018):

Kyllburg station is a bicycle-friendly station and almost barrier-free. The tariff of the Verkehrsverbund Region Trier (VRT) applies to all local public transport (ÖPNV ) .

With the completion of the Eifelbahn Cologne - Trier in the 19th century a flourishing tourism began in Kyllburg. Guests from the big cities, especially Cologne and Düsseldorf as well as the Ruhr area, used to spend their summer holidays on the Kyll. The main attraction was the luxurious Hotel Eifeler Hof with its large event rooms and spa treatments. Guests from the Netherlands could already be welcomed a long time ago, and today they are an important part of tourism in the entire Kyllburger Waldeifel region. The local chronicle reports that even before the First World War, Kyllburg counted 150 Dutch residents daily among its permanent guests and that a torchlight procession of the Dutch took place in Kyllburg on the Queen's birthday . After the Second World War, entire special tourist trains from well-known tour operators with 400 people arrived in Kyllburg. But changed travel behavior to southern Europe almost put an end to the lively hustle and bustle. Today tourism to Kyllburg and the region is growing again. Weekend travelers come from the big cities, Dutch guests stay “in the mountains” for up to a week. A clear plus is currently being created by bicycle travelers , here the Kylltal cycle path is of particular importance for Kyllburg . The outdoor pool right on the Kyll is also attractive for many guests. Kyllburg has (as of 2014) eleven tour operators and over 20,000 overnight stays annually, not including the natural campsite.