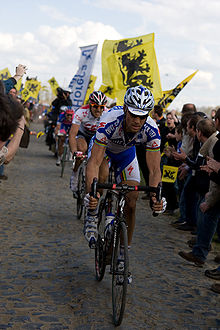 The race led from Compiègne , around 80 kilometers north of Paris , to Roubaix , where it ended in the Vélodrome André-Pétrieux . The entire route was 259.5 kilometers long. 198 drivers started, 113 of whom were able to place. The winner Tom Boonen completed the race at an average speed of 43.406  km / h .

It was a dry, sunny racing day that gave the drivers a tailwind. Bernhard Eisel picked up the pace, creating a leading group of 30 drivers. While George Hincapie had to wait longer for a spare wheel after a tire failure, an eight-man leading group formed after a further increase in pace, led by Alessandro Ballan and Stuart O'Grady . Some favorites like Hincapie, Juan Antonio Flecha , Filippo Pozzato and Magnus Bäckstedt lost so much time in the next pavé sector that they no longer had a chance of winning.

The main focus was now on the eight leading drivers. Stijn Devolder made a breakaway attempt 48 kilometers from the finish and was followed by O'Grady, both of them had a 15 second lead at the 40 kilometer mark. Johan Vansummeren went in pursuit. 34 kilometers from the finish, Cancellara launched an attack in which Boonen and Ballan kept up. The three riders reached the cycling track in Roubaix together, where neither Cancellara nor Ballan had the strength to hold against Boonen. Boonen won by 20 meters over Cancellara.

Tom Boonen took his second win at Paris – Roubaix after 2005 .