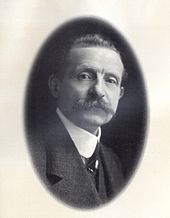 Theo Vienne was one of the initiators of the race

The Paris – Roubaix cycling race in 1896 was the first time the cycling classic was held . It took place on Sunday, April 19, 1896; The winner was the German Josef Fischer .

Until the 1890s, cycling in France took place mainly in Paris , which had several cycle tracks , and south of it; the most important French road race at the time was Bordeaux – Paris . In 1895 Theo Vienne and Maurice Pérez, two entrepreneurs from Roubaix in the north department near the Belgian border, had a 333.33 meter long open cycle track built in their city, the Vélodrome roubaisien , a forerunner of today's Roubaix cycle track. Vienne and Pérez wanted to create an attraction for the region with the cycling track and also to design a road race that led to the north of France and should make Roubaix, an industrial city in the province, better known: Paris – Roubaix . They turned to Paul Rousseau, editor-in-chief of Le Vélo . Rousseau planned a route and sent his colleague Victor Breyer to test it. As far as Amiens , Breyer drove with a colleague in the car, the next day by bike. When he got to Roubaix he was so dirty and frozen that he thought of canceling the race. But after a bath and a good dinner, he changed his mind, it is reported.

When planning the route, Breyer tried to avoid cobblestone passages , called blocks in Belgian , because they wanted to run an "easy" race - "easy" in contrast to the previous "monster races" over several hundred kilometers, such as Bordeaux – Paris . The pavés could only be found for the last 30 kilometers, where the racing drivers drove over sidewalks to avoid them.

The organizers published the invitation to bid for Paris-Roubaix in Le Vélo , and within five days 35 riders had registered, including the eventual founder of the Tour de France , Henri Desgrange (who ultimately did not start). The prize money for the winner was 1,000  francs , about seven times the average monthly salary at the time. A total of 102 professionals registered , but just under half of them started. Among them were the German Josef Fischer, the French Maurice Garin and Paul Guignard , the Welshman Arthur Linton and the colored driver Vendredi from Mauritius , who received special applause from the spectators at the start. Fritz Vanderstuyft, father of the two Belgian racing drivers Arthur and Léon Vanderstuyft , who belonged to the international elite after the turn of the century , was also there. There was also a "special category" of seven amateur drivers from the region of northern France who started with a lead . The oldest of them, aged 53, was a man named A. Nezeloff from Béthune .

Before the start of the race in Paris

The race started in front of the Gillet restaurant on Porte Maillot in Paris; The starting number distribution was located in the restaurant itself. This district of Paris was considered a meeting point for cyclists, as there were many bike shops and bars for cyclists. From two in the morning, the organizers of Le Vélo , the drivers and supervisors as well as a large number of spectators arrived there. The drivers in the “special category” set off at 4 a.m. on the 280-kilometer route. The organizers had made sure that shortly after the start a special train with spectators drove to Roubaix, which arrived there around 1 p.m. although the ticket was expensive at 32 francs , the train was sold out.

At 5:20 a.m., Victor Breyer started the race for 48 professionals. The riders followed their trainers, who acted as pacemakers on wheels - usually tandems . The first checkpoint was reached after 18 kilometers in 32 minutes, and a leading group of seven drivers (Arthur Linton, Josef Fischer, Paul Guignard, Maurice Garin, Sardin, Charles Meyer and Lucien Stein ) was formed, with other drivers at a distance of a minute followed. Because Linton's younger brother, Tom Linton , had problems controlling the pacemaker machine, Arthur Linton fell temporarily out of the leadership group in the Saint Germain Forest .

At 8:04 a.m., after 86 kilometers, the first drivers arrived in Beauvais at an average speed of 33  kilometers per hour . Linton led, followed at short intervals by Guignard, Garin, Fischer and Meyer. The drivers in the special category had already been overtaken at this point. Fischer increased the pace and, at the next inspection at kilometer 117 in Breteuil, was ahead with Linton; Garin was more than four minutes behind and Meyer a quarter of an hour. After 149.5 kilometers in Amiens , where a premium of 150 francs awaited the leaders, Linton beat Fischer by half a bike length. On the drive out of town, however, Linton had to dodge a dog and fell, suffering only minor injuries, but continuously lost ground as a result. But Fischer also had his moments of shock: once a horse shied away from the athlete with his pacemaker and went through, another time cows blocked the road. Nevertheless, Fischer had increased his lead over the following drivers in Doullens (kilometer 179). At 12:17 pm he reached Arras (217 kilometers) and looked fresh; he signed in and drove on immediately. Garin followed him after 23 minutes, but quickly drank a bouillon .

At the last checkpoint, outside Seclin , the drivers were greeted by spectators and a band; The intermediate results of the race had been reported by telegram from the checkpoints to Roubaix. Josef Fischer covered the last 25 kilometers in 59 minutes. Garin followed, 22 minutes behind, and Charles Meyer two minutes later; Meyer had meanwhile taken another three minutes from Garin. At 2:30 p.m., the signal trumpets of the municipality of Hem sounded to announce the first drivers in Roubaix.

Ten minutes later, Josef Fischer arrived at the Vélodrome roubaisien , which was completely filled with more than 10,000 spectators , where he still had to complete six laps to the sound of the Marseillaise . After Fischer, bleeding and dirty, had confirmed his arrival with his signature, he was given a glass of champagne and a gift of flowers. He had completed the race at an average speed of 31 kilometers per hour. Meyer, who had worked his way up to second place, followed after 25 minutes. Three more minutes later, Garin reached the finish at the cycling track. He was celebrated with particular enthusiasm by the public as he lived in Lens , about 50 kilometers away . Arthur Linton came in fourth. After the arrival of Vendredi, who finished 17th, the cycle track was cleared and the finish office moved to the Café Richelieu on the Boulevard de Paris, where it remained open until 18 hours after the start. Another eleven drivers arrived there; the last one, whose time was recorded, crossed the finish line more than eight hours behind Fischer.

“ It is difficult to estimate the number of spectators who came to the Roubaix Velodrome at half past two, but it could be said that it was enormous, considerable, unheard of! The velodrome was black with people. People in the stands, on the additional seats, […], around the track, people everywhere, everywhere. Even in the meadows where you saw the members of the jury - of course! - the scribes who announced the results on blackboards, the photographers who took many pictures. " 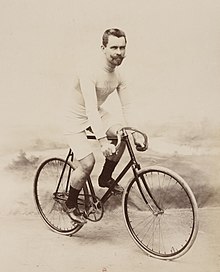 Josef Fischer was the first winner of Paris-Roubaix .