Bazas ( Basats on gascognisch ) is a French town with 4772 inhabitants (at January 1, 2017) in the Gironde department in the region Nouvelle-Aquitaine . 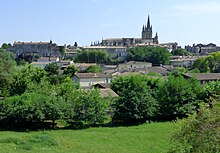 View of downtown from the north

Bazas is located 15 kilometers south of Langon and 60 kilometers southeast of Bordeaux in the rolling hills at the foot of the Landes de Gascogne forests . The place is crossed by the river Beuve .

The existence of a fortified settlement at this point has been proven since the beginning of the Iron Age . Owning a wall with monumental gates soon gave it military importance and a certain superiority.

Bazas is on the Way of St. James to Santiago de Compostela and was a bishopric until the end of the 18th century. As the seat of a presidential court, it also had central administrative and legal functions, so that it could quickly establish itself as the most influential place in the region. It owed its reputation to the visits of such illustrious personalities as Richard the Lionheart and Emperor Charles V.

During the Hundred Years War , Bazas was contested between France and England. From 1441 it belonged again to France.

In 1562 during the Huguenot Wars , the Protestant military leader Durfort (von Duras) conquered the city. He had the Catholic clergy's lips cut off.

Louis XIV stayed in the city on his return from Saint-Jean-de-Luz , where he had married Maria Teresa of Spain .

Bazas received outstanding structures from this golden age. Among them, the most important is the Gothic former cathedral of St. Jean-Baptiste de Bazas , classified as a protected monument historique since 1840 . It was built between the 11th and 14th centuries and rebuilt between 1583 and 1655.

A breed of cattle is bred in Bazas under the name Bazadaise , and the town has a slaughterhouse. Agriculture and livestock are practiced in the region; the forests in the southeast allow extensive timber management. Bazas has a number of industrial operations in the metal, wood, food, ceramics and textile sectors. 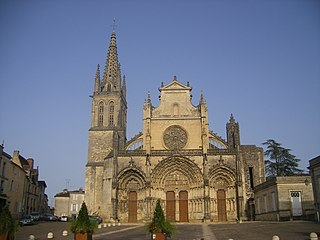 In the central square is the Saint-Jean-Baptiste ( John the Baptist ) cathedral . This 83-meter-long structure is classified as a Monument Historique and has been part of the UNESCO World Heritage “ Paths of the Pilgrims of St. James in France ” since 1998 .

The cathedral was built in the 13th and 14th centuries on the model of the great cathedrals of northern France. It achieved its original reputation through a relic with the blood of John the Baptist kept there. In 1561 it was ravaged by Huguenots , but the triple portal, one of the most beautiful examples of sculpture in the Gironde, was saved from destruction. With money from the French Parliament and with great personal commitment from Bishop Arnaud de Pontac , the church was rebuilt between 1583 and 1635.

The Johannes relic was lost during the French Revolution . The cloister was destroyed, as were the furniture and the choir grille. The latter could be replaced by donations in the 19th century, most notably an altar from the Cistercian Abbey of Rivet.

The central portal shows the last judgment as well as the story of John the Baptist. The interior of the building is remarkable for its long and narrow nave.

Municipalities in the Arrondissement of Langon