The title of this article is ambiguous. Further meanings are listed under Greding (disambiguation) .

Greding , pronounced in the dialect as Greiding , is a town in the Central Franconian district of Roth in Bavaria .

Greding is located 36 km north of Ingolstadt in the area of ​​the Altmühltal nature park . The city is a state-recognized health resort . The municipality is crossed by the A9 motorway from northwest to southeast . The Schwarzach flows in parallel .

There are 31 officially named parts of the municipality (the type of settlement is given in brackets ):

Former parts of the community are:

The climate is temperate . The annual average temperature is 8.4 ° C, the average annual rainfall 707 millimeters.

For the history before the incorporation see Greding (district)

The municipal area was significantly enlarged from 1972 through the regional reform and the municipality came to the district of Roth . Since the regional reform, Greding has been the most southeastern municipality in Middle Franconia and borders on Upper Bavaria and the Upper Palatinate . On April 1, 1971, the previously independent communities Großhöbing and Kaising were incorporated. On January 1, 1972, Euerwang, Grafenberg, Hausen, Herrnsberg, Kleinnottersdorf, Kraftsbuch, Landerzhofen, Mettendorf, Obermässing, Österberg, Röckenhofen, Schutzendorf and Untermässing were added. Esselberg followed on July 1, 1972.

The population is predominantly Roman Catholic . In the area of ​​the municipality there are the following parishes, which all belong to the parish association Greding and the deanery Roth-Schwabach in the diocese of Eichstätt :

St. Bartholomäus , Grafenberg and St. Nikolaus , Esselberg are located in the municipality and belong to the parish of Morsbach , municipality of Titting.

The municipality of Greding is characterized by a large number of churches and thus also church villages .

Previous mayors of the large community of Greding:

The municipal administrative budget for 2007 shows expenditures in the amount of 7,947,000 euros, the asset budget in the same year comprised 4,232,000 euros. The per capita debt fell from 863 to 786 euros due to positive economic developments. Investments of around 10 million euros are planned for the following years, primarily in municipal facilities, water supply and wastewater disposal. 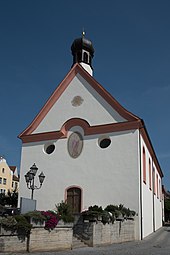 For details, see the respective districts.

Every year on the first weekend in September, the Gredinger Trachtenmarkt takes place on the market square . With around 10,000 visitors, it is one of the most important markets of its kind in Germany.

The Challenge Roth cycle route runs through the municipality of Greding .

The tourism has a great economic importance, the community gave in 2009 about 57,000 overnight stays at. 29 establishments with 574 beds offer corresponding services. In addition, there are numerous day visitors because of the nearby motorway and cycling tourists; the extensive gastronomic offer catches the eye in the townscape. Greding is in the excursion area of ​​the cities of Nuremberg ~ 58 km and Ingolstadt ~ 36 km.

The largest employer in the city is the Federal Office for Equipment, Information Technology and Use of the Bundeswehr with its WTD on Kalvarienberg.

The A 9 runs from north-west to south through the Gredingen urban area. Junction  57 is located in the southwest of the main town .

In the 1980s, Porsche drivers saw it as a particular challenge to drive through the long curve of the A 9 at full throttle. According to legend, this goes back to an interview with the racing driver Walter Röhrl , in which the expression “Greding goes full!” Was coined.

From June 1, 1888 to May 28, 1972, the Roth – Greding railway connected the town with the Treuchtlingen – Nuremberg railway . The trains were named after the terminus at Gredl . Since then, several bus routes have connected Greding with the towns and cities in the surrounding area. With the opening of regional traffic on the high-speed line Nuremberg – Ingolstadt – Munich on December 10, 2006, bus traffic was adapted to connect the town to the Allersberg (Rothsee) and Kinding (Altmühltal) stations . The high-speed line runs west of the city in the 7.7-kilometer Euerwangtunnel .

There is an elementary school in Greding ( elementary and middle school ). In the same building there is a state business school, which works together with the Eichstätt vocational school . Connected there is the Sonnenblume day care center (operator Katholische Kindertageseinrichtungen Ingolstadt non-profit GmbH). There is a primary school in the Obermässing district and an adult education center in Greding . Furthermore, Greding has two kindergartens that are run by the Katholische Kindertageseinrichtungen Ingolstadt non-profit GmbH (St. Martin day care center) and by the Protestant church council Greding. There is also a day nursery operated by the Katholische Kindertageseinrichtungen Ingolstadt non-profit GmbH. A kindergarten is also operated by the church foundations in Obermässing and Röckenhofen.

People in connection with Greding

Honorary citizen of the city of Greding

Municipalities in the district of Roth