Fouleix is a French municipality with 248 inhabitants (at January 1, 2017) in the department of Dordogne in the region Nouvelle-Aquitaine (before 2016: Aquitaine ). The municipality belongs to the arrondissement of Périgueux and the canton of Périgord Central (until 2015: canton of Vergt ).

Fouleix is ​​located about 25 km south of Périgueux and about 25 km northwest of Bergerac in the Périgord Central region of the historic Périgord province .

The municipality is located in a hilly area and is largely covered with chestnut forests.

Fouleix is ​​surrounded by the neighboring communities:

Fouleix is ​​located in the catchment area of ​​the Dordogne river . The Caudeau , one of its right tributaries, marks the border with the neighboring municipality of Saint-Félix-de-Villadeix to the south. The Retz, a tributary of the Caudeau, rises on the territory of the municipality.

Worked and polished stones found in the area of ​​the municipality suggest an early settlement. The history of Fouleix is ​​marked by successive wars. The Hundred Years War between 1337 and 1453 was a dispute between the English and French crowns. During this time, the Périgord was largely affected by bloody fighting and looting. A century later, the Huguenot Wars demanded a blood toll. The imposition of new taxes despite a general emergency led to the Croquant Rebellion in 1594. Subsequently, further uprisings broke out during the 17th century. The crisis hit villages like Fouleix with full force, and the hot spots multiplied until 1642 when Pierre Grellety, leader and "the last croquant" negotiated his surrender.

Toponyms and mentions of Fouleix were:

After records began, the population rose to a peak of around 695 in the middle of the 19th century. In the following period, the size of the community fell to around 170 inhabitants during short recovery phases until the 1980s, before a moderate growth phase set in continues today.

From 1962 official figures without residents with a second residence
Sources: EHESS / Cassini until 2006, INSEE from 2010

Fouleix maintains over former Canton Vergt since 1996 a twinning with Saint-Jacques-de-Montcalm in the Canadian province of Quebec .

It was built in the Romanesque style in the 11th or 12th century and remodeled in the 15th century, probably due to damage it sustained in the Hundred Years War. It has a floor plan in the form of a Latin cross and is built with an even masonry bond. The pointed arched entrance portal to the vestibule without a tympanum is located at the foot of the three-part bell tower and allows entry into the interior of the church. The church is provided with a dome on pendentives . Today it is only used for weddings and funerals.

It dates from the 17th century and is located in the hamlet of the same name on the country road to receive servants and horses from visitors to the village. The house is surrounded by a stone wall with towers at both corners of the country road. These are round in shape and resemble dovecotes that are often found in the region. The property is privately owned and is not open to the public. 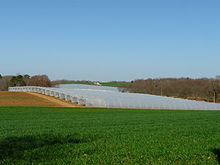 Agriculture and “green” tourism are the main economic factors in the municipality.

The municipality has a public pre-school and elementary school with 47 students in the 2018/2019 school year.

Fouleix is ​​connected to other communes in the department by a line on the Transpérigord bus network from Périgueux to Bergerac.

Communes in the Arrondissement of Périgueux