Bourrou is a French municipality with 128 inhabitants (at January 1, 2017) in the department of Dordogne in the region Nouvelle-Aquitaine (before 2016: Aquitaine ). The municipality belongs to the arrondissement of Périgueux and the canton of Périgord Central (until 2015: canton of Vergt ).

The name in the Occitan language is Borron and goes back to the Gallo-Roman name Burrus or Boro (n) , which in turn is of Germanic origin.

Bourrou is located about 20 km southwest of Périgueux and about 25 km northwest of Bergerac on the border of the Landais and Périgord Central regions in the historic province of Périgord .

Bourrou is surrounded by the neighboring municipalities:

Bourrou is located in the catchment area of ​​the Dordogne river . A nameless river rises in the area of ​​the municipality and flows into the Vern as a left tributary . 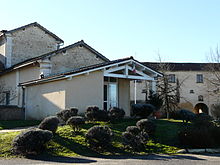 Traces of settlement in the area of ​​the municipality go back to Gallo-Roman times. Aquitaine became a province of the Visigoths in 418 , who settled on the banks of the larger rivers. With the victory of the Frankish king Clovis I over the Visigoth Alaric II in the Battle of Vouillé in 507, the region was to become part of the Franconian Empire, but the Dordogne preferred its independence, so that there were armed conflicts between 700 and 708 from which Bourrou also suffered. The Dordogne and with it the municipality were involved in the Hundred Years' War and the Huguenot Wars before the first croquant rebellion broke out due to the collection of new taxes and also affected the region. During the French Revolution , the parish priest of Bourrou took part in the National Assembly to work in the unification of the French clergy.

Toponyms and mentions of Bourrou were:

After records began, the population rose to a peak of around 435 in the first half of the 19th century. In the following period, the size of the community fell to around 130 inhabitants during short recovery phases up to the 1930s, before a growth phase up to the 1960s, which raised the number of residents to a relative high of around 190. A phase of stagnation then set in that continues to this day.

From 1962 official figures without residents with a second residence
Sources: EHESS / Cassini until 2006, INSEE from 2010

Bourrou has had a town partnership with the former canton of Vergt since 1996 with:

A simple chapel , of which only the flat apse remains, was built in 1500. Today's church, consecrated to the Archangel Michael , was rebuilt and enlarged in the second half of the 19th century with the financial and active support of the community. It was inaugurated on August 18, 1868 . It consists of a nave with a main and two side aisles. The former entrance portal in the west is designed with five arched archivolts . Today's entrance to a vestibule in the east is decorated with a wide archivolt that rests on small columns . The bell tower with arched windows and a pointed roof rises above the vestibule . There is a stone statue above the entrance and a clock tower above it . Small hexagonal towers soar up on either side of the bell tower. They have narrow openings to loopholes remember. Wrought-iron crosses can be seen at their tips, reaching halfway up the bell tower. The main aisles and the two side aisles are equipped with four-part ribbed vaults . Numerous stained glass windows come from the stained glass workshop of the Carmelites of Le Mans . There is a convent near the church , which is inhabited by around ten nuns who take care of elderly and disabled people.

It was built in the 19th century and was the residence of the de la Farque and du Jonchay families. It consists of two T-shaped living quarters. Four windows and doors on each floor accentuate the facades towards the inner courtyard and the garden. Each end point of the building is equipped with hexagonal three-story towers that have small loopholes. The building is in the middle of his park, surrounded by former agricultural outbuildings. In 2003 the Monciaux and la Sudrie estates were bought by two different owners. The Monciaux estate has kept its hotel and tourist business, while the La Sudrie estate has started operating an equestrian center with high-quality facilities, including: a. with an Olympic riding arena. 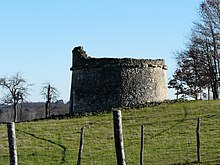 Near the center of Bourrou, the ruins of a former dovecote rise on the slope of a hill overlooking the landscape. It belongs to the type of free-standing dovecotes that were set up especially in the 18th century. Its circumference and the thickness of the walls indicate that it once belonged to a wealthy man who owned a very large estate.

Agriculture is one of the most important economic factors in the municipality, which also relies on "green" tourism.

The equestrian center of Bourrou offers 61 hectares a. a. various riding courses and training, horse rides and equestrian sports geared towards the needs of disabled people.

Jean-Louis-Auguste Clavel, known as Canon Clavel de Saint-Geniez, born on January 21, 1808 in Saint-Geniez-d'Olt ( Aveyron department ), died in 1876, was a Catholic priest as well as a doctor and botanist . After his ordination he was u. a. Parish priest of the parish of Bourrou.

Communes in the Arrondissement of Périgueux