from Wikipedia, the free encyclopedia
x 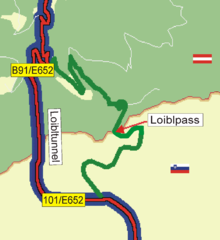 The Loiblpass (also Loibl , Slovenian : Ljubelj ) is 1368  m above sea level. A. high alpine pass over the Karawanken between Carinthia in Austria and the Slovenian Upper Carniola . The road over the Loibl is the shortest connection between Ferlach and Tržič (Neumarktl). It is located in the eastern Karawanken, not far from the high chair .

For centuries, the Loiblpass was one of the most important crossings over the Karawanken, but since the opening of the Karawanken tunnel it has lost a lot of its importance. The Loiblpass-Straße B91 begins at the municipality border of Klagenfurt (continuation of the Rosental Straße B85, until 1918 also called Laibacher Straße ), leads from Kirschentheuer via Unterloibl to the Kleiner Loibl, further into the Loibl Valley and over steep hairpin bends to the Loiblpass, below which Austria and Slovenia are connected by the Loibltunnel. There is a driving ban for vehicles with a total weight of over 3.5 tonnes and for vehicles with trailers with a gross vehicle weight of more than 750 kg.

Neighboring crossings are the Wurzenpass in the west and the Seebergsattel in the east .

Already in Roman times the Karawanken were crossed here on the way from Virunum to Emona - today's Laibach / Ljubljana . Two altar finds on the Carinthian side, both dedicated to the goddess Belestis , prove this. One of them is in a path chapel below the Leonhardkirche in Loibltal, the other at the parish church in Unterloibl. After the fall of the Roman Empire, however, the trail lost its importance and fell into disrepair.

When Berthold von Aquileja bequeathed the Loibltal to the newly founded Viktring Abbey in the 12th century, the latter had to commit to looking after a hospice on the Loibl. However, the monastery failed to maintain the path, which is why in 1488 the rule of Hollenburg took over ownership and thus also the maintenance of the path. The hospice and the Alt St. Leonhard Church have been left to decay over the centuries. Today only ruins remain of the buildings.

The mule track , which was used until the Middle Ages and largely circumvented a gorge, was expanded by the estates from 1560 onwards. Previously received from the city of Klagenfurt , they were now looking for a convenient connection to the port of Trieste . The construction cost 20,000 guilders and took 20 years due to the difficult conditions. For this purpose, the road could now be used with six-horse cars. From 1573 the road on the Carinthian side was completed. Two toll booths were set up - in Unterloibl and on the Kleiner Loibl - as well as the Devil's Bridge, which greatly shortened the route. During this time, the first short tunnel was built at the top of the pass, which, however, had to be removed because of the risk of collapse when Emperor Karl VI. wanted to cross the Loiblpass. Emperor Karl encouraged the further expansion of Loiblstrasse to become a paved art route , as he too wanted to use it as the main connecting route from Vienna to Trieste. The expansion to today's street layout was carried out during the Second World War by forced laborers who also built the Loibl tunnel.

The Loibl Bach has eaten a deep gorge at the beginning of Loibltals over millions of years: the Tscheppaschlucht . Today it is accessible via narrow paths, bridges and ladders as a popular excursion destination from Unterloibl to Gasthof Deutscher Peter . At the end near the Devil's Bridge there are several waterfalls , u. a. the 26 m high Tschauko Falls.

The road branches off to Windisch Bleiberg and the Bodental near the summit of the Kleiner Loibl (Sapotnica) . It is said that there Emperor Charles VI. was greeted by the locals at an inn on August 25, 1728 on his way to the Loibl Pass and wanted to inquire about their way of life. However, they could only answer in Slovenian , which the emperor did not understand. The only man who could speak German was Peter Tschauko, the innkeeper. The emperor is said to have been so taken with the conversation with the landlord that he addressed him as "German Peter". This name was carried over to the inn and was retained, especially since the eldest son has always been baptized Peter since then.

Loiblpass and first tunnel on a copper engraving from 1689 ( Valvasor )

The Loibl tunnel is an important element in terms of traffic across the Loiblpass. The first tunnel was built around 1560, was 150 meters long and was located directly below the narrow Karawankenkamm. At the time, such a long tunnel was something special.

As early as the 17th century, there were plans to build a new tunnel near the current tunnel, which would have made the crossing much easier. However, it failed to finance the construction costs. Instead, the old tunnel was removed and replaced by a four-meter-wide incision 130 m long. Two obelisks on the top of the pass are supposed to mark the completion of the construction work under Emperor Charles VI. recall. They also mark the course of the former tunnel.

In September 1942, Friedrich Rainer , the Gauleiter of Carinthia, pushed through the construction of a new Loibl crossing, the centerpiece of which was to be a new tunnel: 1570 m long at 1068 m above sea level under the mountain ridge. The lack of connections across the Karawanken justified this north-south connection, which was important from a military point of view. For the establishment, the SS organization concluded a contract with the "Universale Hoch- und Tiefbau AG", in which, among other things, the SS undertook to provide labor from concentration camps. From March 1943, civilian forces and 1,652 prisoners of war and concentration camp inmates therefore worked under inhumane conditions on the new tunnel. The forced laborers were interned in two outposts of the Mauthausen concentration camp : the Loibl concentration camp consisted of the Loiblpass south camp near Sankt Anna under the Loibl (Sveta Ana pod Ljubeljem) and, from the summer of 1943, the Loiblpass north camp immediately behind the border in the municipality of Windisch Bleiberg . 40 people died as a result of the hard work and constant falling rocks. Since the employment contracts also allowed a maximum rate of 7.5% injured or sick workers, large numbers of them were sent back to the Mauthausen concentration camp, which meant certain death for hundreds of people. Those forced laborers who were unable to be transported were killed in the camp by Sigbert Ramsauer , the camp doctor at the time, by injecting gasoline. 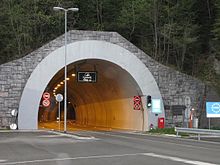 The breakthrough came on December 4, 1943. Gauleiter Friedrich Rainer came with other high-ranking SS representatives for an inspection. Exactly one year later, on December 4, 1944, the first Wehrmacht vehicles were able to enter the tunnel, which at the time was more of a temporary measure: only two by three meters in profile, it nevertheless formed an important transition for military traffic and was a lifesaver after the end of the war Connection for thousands of soldiers on their way home and for refugees. On May 7, 1945, the remaining 950 prisoners were liberated from the two concentration camps, and the next day they marched on foot to Feistritz in the Rosental , where they met the partisans . On October 10, 1947, Sigbert Ramsauer was sentenced to life imprisonment by an English military court, but was pardoned in 1954 and soon even employed as a doctor at the Klagenfurt Regional Hospital . The main responsible SS commanders Jakob Winkler and Walter Brietzke were sentenced to death by hanging on November 10, 1947, both death sentences were carried out in March 1948.

When Yugoslavia became communist , the border crossing was closed for the time being. The old pass crossing could be used again from August 1950, but further expansion of the Loibl tunnel and the Loiblpass federal road was delayed until 1960, when the tunnel was expanded. Since November 15, 1963, traffic has been routed in two lanes through the adapted tunnel; the official opening took place on July 1, 1964. The old Loiblpass-Straße has not been open to public transport since then , but it is possible to cross the border on foot.

Memorial plaque on the Slovenian side

Monument on the Slovenian side

On the Austrian side, two inconspicuous stone tablets, which are attached to the right of the tunnel portal, and on the Slovenian side, a good kilometer behind the national border, an impressive monument on the right of the road and on the opposite side, remind of the injustice during the tunnel construction and the victims of the Nazi era Explanation boards on the site of the former camp south, where the foundations of the camp buildings have been preserved.

On June 13, 2015, a memorial ceremony for the concentration camp victims took place on the Loibl Pass. Delegations from 5 countries, partisan and concentration camp associations, members of the deportees at the time and politicians, such as the Carinthian Governor Peter Kaiser and Minister of Social Affairs Rudolf Hundstorfer took part. Stanislaw Leszczynski from Poland, one of the survivors of this martyrdom, appealed to the youth to learn from the past, to practice tolerance in order to keep the peace in Europe.

The Mauthausenkomitee Kärnten / Koroska has been taking initiatives against the suppression of Nazi atrocities since the mid-1990s. Peter Gstettner: "Because we are in a profound moral crisis, banks have been saved, but no worthy memorial has been erected here." Until then, the work of art with the title "A grave in the air" by Bernadette Grabner is based on the Paul Celan's “death fugue” to the souls of the deceased who are symbolically spun into cocoons in a treetop not far from the former Loibl concentration camp, waiting to be finally liberated. Underneath are cuboid granite stones in the meadow, depicting human bodies - "The Return of the Stones" (2014) by Georg Planer. (Memorial on the former concentration camp site (north) on the Loiblpass.)