Houécourt is a French commune with 440 inhabitants (January 1, 2017) in the Vosges department in the Grand Est region . It is part of the Neufchâteau arrondissement and the Terre d'Eau municipality .

The municipality of Houécourt is located at about 320 to 330 m a.s.l. in the south of Lorraine, halfway between Neufchâteau and Mirecourt , more spaciously about 45 kilometers south of Toul . The village extends in the transition area between the Bassigny as part of the plateau of Langres and the Xaintois . The river valleys, which fan-shaped towards the upper Meuse, are characteristic of the area .

Before the French Revolution, Houécourt belonged to the Bailiwick of Neufchâteau .

A county of Houécourt was established in 1719, which two years later became a margraviate. The counts provided the long-established Lignéville family .

The parish of Houécourt was under the patronage of the Abbot of Saint-Mihiel , who claimed two thirds of the tithe . 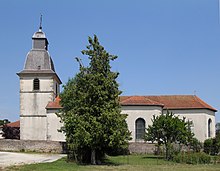 Agriculture still plays a role in Houécourt today. There are seven farms in the municipality (breeding horses, sheep and goats). There are also small trade and craft businesses. Some residents commute to the BSN Glasspack plant in the neighboring community of Gironcourt-sur-Vraine , which has been part of the Owens-Illinois group since 2004 .

The D 166 trunk road from Épinal to Neufchâteau, which is partially two-lane and free of intersections, bypasses the community in the south. It crosses the Autoroute A 31 ( Toul - Dijon ) west of Houécourt . The motorway junction set up here is one of three connections in the Vosges department and an important regional transport hub.

Commons : Houécourt  - collection of images
Communes in the Arrondissement of Neufchâteau