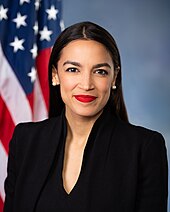 Alexandria Ocasio-Cortez (born October 13, 1989 in New York City ), often called by her initials AOC , is an American politician of the Democratic Party . She joined in January 2019 for the 14th congressional district of New York to the United States House of Representatives as its youngest member on after the code reigning in fourth place in the party leadership mandate holder Joe Crowley had struck. Ocasio-Cortez describes herself as a democratic socialist .

Ocasio-Cortez is of Puerto Rican descent. At an event she also reported that parts of her family descended from Sephardi . Her mother moved to New York at the age of 23, her father - an architect - lived there all his life. Born in the Bronx as Nuyorican , Alexandria Ocasio-Cortez moved to affluent, suburban Yorktown , Westchester County, at a young age . In high school , she won second place in the microbiology category of the pre-university Intel International Science and Engineering Fair with a microbiological research project . For this reason, the Lincoln Laboratory at the Massachusetts Institute of Technology named the asteroid (23238) Ocasio-Cortez after her in 2007 .

During her studies at Boston University , which Intel sponsored with a scholarship, she worked on immigration issues for the US Senator Edward Kennedy in 2008/09 . Her father died of lung cancer in 2008 . According to The Intercept , the family then struggled for years with the Westchester County Surrogate Court, which administers the estates of people who have died without a will. In 2011 she completed her studies in Economics and International Relations cum laude from, returned first in the Bronx back and helped her mother by staying in the Taco - Fast Food Flats Fix worked as a dispensing force and waitress. She also worked as a teacher at the National Hispanic Institute . She worked for the presidential campaign of Bernie Sanders with the year 2016th

Ocasio-Cortez was initially civic in her residential area in the Bronx and is a political member of the Democratic Socialists of America .

In the 2018 mid-term election , Ocasio-Cortez ran for a seat in the United States House of Representatives . On June 26, 2018, she unexpectedly won the party primary against longtime MP Joe Crowley in New York's 14th Congressional District. It prevailed with 16,000 to 12,000 votes. Crowley won the 2016 main election with 148,000 votes. Ocasio-Cortez has received support from interest groups such as Black Lives Matter , Democracy for America, and MoveOn.org . Their motto was: "I can't challenge big money with more money, I have to beat it with a completely different game." While Crowley invested $ 3.4 million in his nomination campaign, Ocasio-Cortez's budget was $ 194,000. She had raised $ 300,000 in campaign contributions by the area code. During the election campaign she appeared several times on TYT and was supported by this network as a member of the Justice Democrats , while most other media only received her after the election.

On November 6, 2018, she won the main election for the House of Representatives against Anthony Pappas, the Republican candidate , in this traditionally Democrat-dominated, Hispanic majority constituency. Since taking office on January 3, 2019, she is the youngest woman in Congress to date.

Ocasio ‐ Cortez is running for re- election in the 2020 House of Representatives election. It has an unusually large number of challengers from both parties. The amount of money donated during the election campaign is also exceptionally high.

In response to a derogatory and vulgar abuse from MP Ted Yoho , Ocasio-Cortez delivered a high profile speech against sexism in Congress on July 23, 2020 . She criticized a culture of impunity and the acceptance of violence and violent language against women as well as a whole power structure that supports this.

Ocasio-Cortez is campaigning for general state health insurance ( single payer ), for the abolition of the US immigration service and for a minimum wage of 15 US dollars. 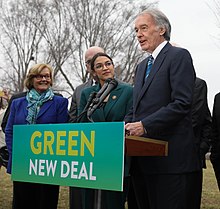 She is one of the supporters of the Green New Deal , an initiative with the aim of ecological restructuring of industrial society, and made this a focus of her election campaign. In 2018 she accompanied the Sunrise Movement initiative , which is also committed to the Green New Deal, in filling the office of Nancy Pelosi .

Ocasio-Cortez became one of the most visible politicians of her party with her 3.8 million Twitter followers (April 2019) and many appearances in traditional media; she is considered better known than some presidential candidates. Her call to challenge conservative Democratic elected officials in primary elections caused controversy within her party. For example, she made opponents of members of the Congressional Hispanic Caucus and the Congressional Black Caucus by calling on the Justice Democrats group, affiliated with her , to run against the Texas Latino Henry Cuellar , and, according to rumors, planning candidacies against the influential New York African American Hakeem Jeffries were. More centrist Democrats therefore planned in 2019 to challenge Ocasio-Cortez himself in the primary for the 2020 election .

Ocasio-Cortez represents the monetary policy views of the Modern Monetary Theory , which opponents, such as the former Democratic US Treasury Secretary Lawrence Summers , criticize as the "voodoo economy".

Together with Ilhan Omar , Ayanna Pressley and Rashida Tlaib , she appears as a group called The Squad .

In June 2019, Ocasio-Cortez compared the refugee camps on the US southern border with concentration camps , which sparked a debate about the admissibility of such comparisons .

Ocasio-Cortez spoke out in favor of Bernie Sanders (“ endorsement ”) ahead of the Democratic Party's presidential primaries in 2020 .

Ocasio-Cortez voted to end US military aid to the Saudi Arabia- led military coalition in the Yemen War .