from Wikipedia, the free encyclopedia
This is the spotted version , flagged on June 2nd, 2020 . There are 2 pending changes that have yet to be viewed.

The College of Europe (English) or Collège d'Europe (French), unofficially also Dutch. Europacollege , Polish Kolegium Europejskie or German Europakolleg , is an independent postgraduate university institute for European studies, with locations in Bruges ( Belgium ) and Natolin (district of Warsaw , Poland ). It was founded in 1949. The Europakolleg is considered to be the “cadre forge of the European Union”.

Many high-ranking politicians, diplomats and academics have graduated from the College of Europe. The students come from over 50 countries and are usually selected in a highly selective selection process by a selection committee that works with the national foreign ministries. The working languages ​​at the College of Europe are English and French.

The "Verversdijk" department in Bruges

The “Dijver” department in Bruges 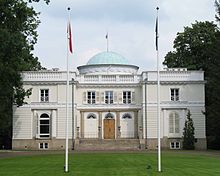 The Potocki Palace in Natolin

The following postgraduate courses are offered at the Europakolleg:

All courses last ten months (mid-September to mid-June), the final exams take place at the end of May / beginning of June. Most students receive scholarships from their national governments. In Germany, study places and scholarships are awarded by an independent selection committee and organized by the European Movement Network . In Austria the Austrian Exchange Service (ÖAD) selects the students, in Switzerland the State Secretariat for Education, Research and Innovation .

The College of Europe in Bruges was founded in 1949, making it the oldest postgraduate institute in the field of European integration. The foundation goes back to the Hague European Congress of the European Movement . The Spanish politician Salvador de Madariaga proposed a corresponding foundation.

Every year around 400 students from over 50 nations graduate in the fields of law , economics , political and administrative sciences as well as international relations and diplomacy . The graduates then work in the European institutions, associations, companies and national administrations, authorities, law firms and diplomacy.

The College of Europe in Natolin was founded in 1992 as a sister campus to Bruges and is currently attended by around 120 students annually. The Natolin campus offers a wide range of interdisciplinary studies. The "European Interdisciplinary Studies" are subdivided into the four main areas of EU Public Affairs and Policies (governance, decision-making processes), European History and Civilization (history and civilization of Europe), The EU and its Neighbors ( European neighborhood policy ) and The EU in the World ( EU foreign policy ).

The college is always looking to get close to celebrities; heads of government and state, European commissioners and numerous other personalities visit the College of Europe every year. In November 2010 the German Chancellor Angela Merkel visited the university in Bruges. In 2014, Chinese President Xi Jinping visited the College of Europe and gave a keynote address on EU-China relations.

The university campus in Belgium is located in the historic old town of Bruges. The Polish campus is located in a nature reserve on the southern outskirts of Warsaw (30 minutes by metro from the city center). Study fees include costs for room and board on campus; this creates a close coexistence among the international student group.

According to the Times , the College of Europe is "to the European political elite what Harvard Business School is to the American corporate world". Der Spiegel writes that the College of Europe is "Europe's last bastion". It has been training Europe's drivers for half a century. A degree from college "opens up career opportunities, for example as a well-paid civil servant at the EU Commission, in the Council, in the European Parliament or as a lobbyist for one of the countless associations, for large law firms or company representatives. Thousands of graduates from the College of Europe, founded in 1949, have demonstrated that this It works out: Brussels is a playground for Bruges graduates. " The notorious "Bruges Mafia" have already helped one or the other to get a good job.

Alexander Stubb , Vice-President of the  European Investment Bank  in  Luxembourg and former Prime Minister of Finland , alumnus of the 1994–1995 Ramon Llull PhD, and professor at the college

Helle Thorning-Schmidt , General Manager of  Save the Children International and former Prime Minister of Denmark . Alumna of the 1992–1993 Karl IV. (HRR) doctorate

Manuel Marín , former President of the European Commission and alumnus of the 1973–1974 Giuseppe Mazzini doctorate

Many former students of the college (called Anciens in French) now work as ministers in their respective national governments, in European and national parliaments, as diplomats or in high-ranking positions in government and business.

A list of the "Anciens" from 1949 to 1999 can be found in The College of Europe. Fifty Years of Service to Europe (1999), written by Dieter Mahncke, Léonce Bekemans and Robert Picht .

Important alumni of the College of Europe in Bruges, Belgium (since 1949):

Important alumni of the College of Europe in Natolin, Poland (since 1992):

Years at the College of Europe are called "PhDs". Each doctorate bears the name of a famous European . The French École nationale d'administration (ENA) also has this tradition.

The opening ceremony of the college is presided over by a famous politician each year. This is called the orateur ; In recent years, among others, Angela Merkel , David Miliband , Jean-Claude Juncker , Javier Solana , José Manuel Barroso , Valéry Giscard d'Estaing , Juan Carlos I , Margaret Thatcher and François Mitterrand belong to the Orateur .

The College of Europe is famous for its concept of the "Flying Faculty". Few professors are exclusively college professors. Rather, the professors come as "visiting professors" from science, administration and the private sector. This guarantees a special proximity to the practice. The teaching staff is at least as international as the student body. The Europakolleg follows the principle of first developing a program and then looking for the best people. During the academic year, a. Conferences with renowned practitioners such as Jean-Claude Juncker or Günter Verheugen are organized and workshops, simulations, discussions and excursions are offered.

Rectors of the College of Europe