The station Hoher Meißner on the Hoher Meißner is an important broadcasting location of the Hessischer Rundfunk (HR) for VHF and digital television ( DVB-T ).

History and description of the facility

After construction of the first transmission facilities of the Hessian Broadcasting took in April 1952 trial operation with central shaft for the radio on, which passed after successful completion in June 1952 in regular operation.

The medium-wave transmitter (594 kHz, 100 kW), which is operated in the single-frequency network with the Weiskirchen transmitter , was switched off on December 31, 2009, as the Hessian Broadcasting Corporation completely dispensed with medium-wave for cost reasons. The main transmission mast for medium wave on the Hoher Meissner had already been demolished in 1995, the associated reserve transmission mast, which was initially still in use, followed on March 16, 2015.

On September 3, 2019, an accident occurred on one of the masts in which a maintenance gondola with three workers from an external company who were busy installing a new antenna for DAB + reception fell from a height of 50 meters. This resulted in the death of the three workers.

Antenna structures or transmission systems on the Hoher Meissner:

Due to the topographical and geographical location, the transmission system reaches 6 federal states with a powerful 100 kW output. In addition to Hesse, the reception extends to Thuringia, Lower Saxony, Saxony-Anhalt, Bavaria (Rhön, Lower Franconia) and even as far as eastern North Rhine-Westphalia (Sauerland).

Since November 30, 2015, this station has also broadcast digital radio.

On November 8, 2017, the broadcast of DVB-T programs ended and regular operation of DVB-T2 HD began. The programs of the ARD ( hr -Mux) and the ZDF are broadcast in the DVB-T2 standard using the HEVC video coding method and in Full HD resolution.

The DVB-T broadcasts on the mast of Media Broadcast run since 29 May 2006 and are the single-frequency network operated (Single Frequency Network) with other transmitter sites. They ended on November 8, 2017. 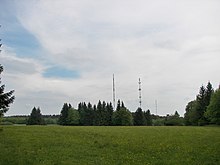 Before the switch to DVB-T, the broadcasting location was still used for analog television:

On September 3, 2019, around 9:00 a.m. local time, a serious accident occurred at the Hoher Meißner transmission mast.

A work team was working in a maintenance gondola on one of the masts when it fell from a height of around 50 meters for an as yet unknown cause. At least three people lost their lives in the process.