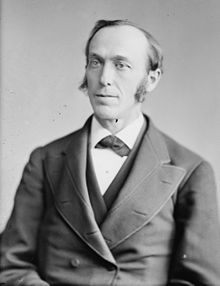 Thomas Collier Platt (born July 15, 1833 in Owego , New York , † March 6, 1910 in New York City ) was an American politician who represented the state of New York in both chambers of Congress .

Thomas C. Platt was born as the son of William Platt, a successful lawyer , and his wife Lesbia Hinchman in Owego and, according to his father's wishes, should have studied theology and worked as a missionary of Presbyterianism . After attending the Owego Academy , Platt enrolled at Yale College , where he studied theology between 1850 and 1852. However, he had little interest in it, so he eventually dropped out.

After that, Platt worked in numerous jobs, worked in a pharmacy , briefly was the editor of a small newspaper and, at a young age, became President of the Tioga National Bank . He lived in Michigan for some time , investing in wood processing companies, and became chairman of the board of directors of Southern Central Railway .

In 1859, Platt finally settled in New York State, where he was elected administrator of Tioga County for a two-year period that same year . As a Republican , Platt was elected to the United States House of Representatives in March 1873 , to which he served for two terms until March 1877. After that, Platt devoted himself temporarily to other private-sector ventures. He was elected President of the United States Express Co. in 1879 and to the Board of Directors of the Quarantine Commissioners of New York in 1880. In March 1881, he was elected to the US Senate . Because of a dispute with US President James A. Garfield , who wanted to interfere in matters of New York State, with which Platt did not agree, he resigned his mandate on May 16, 1881, after only two months. On the same day, Roscoe Conkling , who was Senator from New York at the same time as Platt, resigned.

In 1896 Platt tried - again with success - for a Senate seat. He moved back to the Second Chamber of Parliament on March 4, 1897, where he was re-elected in 1903. Even if Theodore Roosevelt held a much higher position of power as Governor of New York and later US President, Platt was considered the actual boss of the New York Republicans in the ten years that he represented New York in the Senate . It is also thanks to Platt's interventions that Roosevelt was chosen in 1900 as a vice-presidential candidate by William McKinley . In 1908 a new nomination of his party failed, so that Platt left the Senate on March 3, 1909.