The title of this article is ambiguous. Further meanings are listed under Laage (disambiguation) .

Laage is a town in the Rostock district in Mecklenburg-Western Pomerania (Germany). It is the administrative seat of the office of the same name , to which three other municipalities belong, and forms a basic center for its surroundings .

The city of Laage is located between the cities of Güstrow , Teterow and Rostock on a natural ford in the Recknitz valley .

Terminal moraines run to the west and east of the Recknitz glacial valley . The cold mountain is 62 m above sea level. NHN the highest point in the city. Rostock-Laage Airport is to the west of the city .

The urban area consists of the city of Laage and the following districts:

Laage was called Lauena in 1216 . The originally old Polish name changed to Lawe (1257) and Laue (1306), then again Lawe , finally in 1622 in Lage (w became g) and in 1726 in the spelling Laage, which is common today . The Wendish lava could be interpreted as a footbridge or bridge ; So Laage is the bridge over the Recknitz flowing there .

Already in the Mesolithic , i.e. 8000 BC. BC, hunters, gatherers and fishermen lived here in a fertile area. Finds from the Neolithic (around 4500 to 1800 BC) and the Bronze Age (1800–70 BC) have also been recorded in this area. A burial mound near Goritz attests to finds from the late Bronze Age. Before their departure in the migration of the peoples , the region was inhabited by Germanic tribes .

In the early Middle Ages there was a Slavic castle and castle settlement. To cross the Recknitz lowlands, paved paths made of planks and gravel and boulders were built in the 6th century at the latest. A total of five crossings were discovered in 2015, the more recent among them were dated between 719 and 830, the most recent in the Old Slavic period.

German colonization took place at the end of the 12th century, and Laage became a German castle at the crossing of the Recknitz. Laage was first mentioned as a village in 1216. The place belonged to the rule Werle . In 1270, Laage was mentioned in a deed of donation from Prince Nikolaus von Werle . This was the seat of the governor until around 1500 . In the middle of the 13th century, the construction of an early Gothic village church began, which then got its tower in the 15th century. In 1309 (according to other sources 1271) Laage was named as an oppidum , so it had city ​​rights . The city developed through the important east-west connection of the via regia - the royal road from Wismar to Demmin - and a country road to Rostock . To protect against robber barons, Laage was given a wall with a moat in the 14th century. The Wendish principality of Werle died out with Prince Wilhelm , and the Mecklenburg dukes also inherited Laage. The place became a country town in Mecklenburg and as such was one of the towns in the Wendish district that were represented on the Mecklenburg regional parliaments of the 1523 state estates until 1918 .

In 1569 a big fire broke out in the city. Parts of the city, church and town hall fell victim to the flames. In the Thirty Years War , imperial troops devastated Laage in 1638. Then the plague followed, which only five residents survived. The Northern War and the Seven Years' War hardly recovered, with the billeting of soldiers requiring great sacrifices. In 1712 Tsar Peter the Great had his quarters in Laage. In 1759 another city fire followed, in which 63 houses and 24 barns burned down.

The city was recovering from the wars. In 1768 it received a new city constitution, which was in force until 1918. Since then there has only been one mayor and two senators. The citizen college consisted of speakers, three quarter men and three deputies.

A paper mill was built in 1692 and the post mill on Bullenberg in 1748 . In 1786 the first pharmacy of the surgeon Hektor was established. In 1814 Field Marshal Gebhard Leberecht von Blücher visited the city.

In 1829 Laage was better connected to the transport network with the construction of the Rostock- Neubrandenburg highway . After the founding period , the place had 2345 inhabitants in 1885. The district court and a paper mill were set up. The railway connection followed in 1886. In 1891 a volunteer fire brigade was founded. A dairy was built, the gas station (1905), the waterworks (1926), and in 1915 the place received electric light.

In the 1920s, new residential buildings were built, including in Paul-Lüth-Straße, St.-Jürgen-Straße, Goethestraße and Breesener Straße. The sewer system was also expanded.

On May 1, 1945, the Red Army marched into Laage. The day before, local Social Democrats had dismantled the armored barriers erected for defense. The acting mayor, Otto Thode, went to meet the Soviet troops and thus prevented destruction in Laage.

After the Second World War , the number of inhabitants doubled due to the influx of refugees .

At the end of 1945 and beginning of 1946 ten young people (aged 16 and over) were arrested in Laage by the Soviet secret service NKVD and sentenced to long prison terms by a military tribunal for “hostile attitudes towards communism and the Red Army”. Seven of them perished in the Soviet special camp in Sachsenhausen . The group was rehabilitated in 1993 by the Prosecutor General of the Russian Federation .

The milk sugar plant started producing again in 1946. Agricultural production cooperatives emerged around 1950, and the state-owned estate was important. An outdoor pool was built and a second school was built on the new sports field in 1967. The Breesener Strasse hospital became a rural outpatient clinic.

The military airfield was built around 1980 . The Jagdbombenfliegergeschwader 77 and the Naval Aviation Squadron 28 of the National People's Army (NVA) had been stationed at this military airfield with Sukhoi Su-22 aircraft from 1984 until the NVA was dissolved. Therefore, from 1979 to 1988 the residential area Kronskamp was built with 850 apartments in prefabricated construction , u. a. for the soldiers stationed in Laage. A third school now also had to be built.

After the fall of the Wall, the historic town center with its town hall and a little later the only barn district still preserved in Mecklenburg was completely renovated as part of the urban development subsidy. The prefabricated building area has also been significantly improved since 1998 through demolitions and upgrading measures.

The military airfield continues to be operated by Jagdgeschwader 73 "Steinhoff" of the Bundeswehr and after 1994 it was expanded in parallel to the civil airport Rostock-Laage . In 2018, around 290,000 passengers used the airport.

Rossewitz: There was a castle here in the Middle Ages. Landowners were u. a. the Nortman (until 1450) and von Vieregg (until 1760) families ; it was then ducal chamber property . The early baroque manor house Rossewitz was built on the foundations of the castle according to plans by Charles Philippe Dieussart between 1657 and 1680 . It is considered to be the first baroque building in Mecklenburg. Grand Duke Friedrich Franz I lived in the palace several times. After 1945 it was a refugee accommodation. In 1982 the roof collapsed and in 1986 an emergency roof was built. Renovation work has been taking place since 1993.

Weitendorf: The church dates from the 13th century, the upper baroque tower tower from the 18th century and the baroque park from 1763.

On July 1, 1950, the previously independent communities Breesen and Kronskamp were incorporated. Liessow was incorporated into the city of Laage on June 13, 2004, Weitendorf on July 1, 2006 and Diekhof on May 26, 2019.

The sharp increase in the number of inhabitants in 2019 is due to the incorporation of Diekhof.

After the local elections on May 26, 2019 , the city ​​council of Laage will consist of the mayor and 19 city representatives:

The flag was approved by the Ministry of the Interior on April 4, 2016.

The flag is made of yellow cloth and is covered in the middle with the figure of the city's coat of arms, which occupies two thirds of the height of the flag: a looking black bull's head with a closed mouth and a knocked-out red tongue, between whose silver horns a red lily grows. The relation of the height of the flag cloth to the length is like 3: 5.

The official seal shows the city arms with the inscription "• STADT LAAGE •".

→ See also the list of architectural monuments in Laage 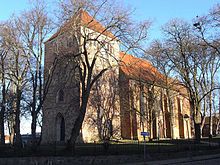 Laage is located on the federal highways B 103 to Güstrow and B 108 to Teterow as well as on the national roads L 18 to Ticino and L 39 to Rostock .

The Laage (Meckl) station is on the Neustrelitz – Warnemünde line . Here the Rostock S-Bahn runs with the S3 Rostock –Güstrow line.

Rostock-Laage Airport is to the west of the city .

Cities and communities in the Rostock district