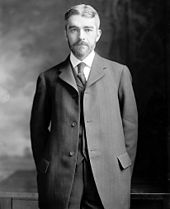 Francis Rives Lassiter (born February 18, 1866 in Petersburg , Virginia , †  October 31, 1909 there ) was an American lawyer and politician . Between 1900 and 1909 he twice represented the state of Virginia in the US House of Representatives .

Francis Lassiter was the great-nephew of Congressman Francis E. Rives (1792–1861). He first attended McCabe's University School . After a subsequent law degree at the University of Virginia in Charlottesville and his admission to the bar in 1887, he began to work in this profession in Boston . In 1888 he returned to Petersburg, where he also practiced as a lawyer. From 1888 to 1893 he was also the legal representative of this city. He then served as the state attorney for the eastern part of Virginia between 1893 and 1896 . Lassiter was also a captain in the state militia. Politically, he joined theDemocratic Party .

After the death of MP Sydney Parham Epes , Lassiter was elected to the US House of Representatives in Washington, DC in the by-election due for the fourth seat of Virginia , where he took up his new mandate on April 19, 1900. After being re-elected, he could remain in Congress until March 3, 1903 . Thereafter, Robert G. Southall was elected as his successor. In the congressional elections of 1906 Lassiter was re -elected to the US House of Representatives in the fourth constituency of Virginia, where he replaced Southall on March 4, 1907. After being re-elected, he was able to exercise his mandate until his death on October 31, 1909.