The Archdiocese of Denver ( Latin : Archidioecesis Denveriensis ) located in the USA is a diocese of the Roman Catholic Church . It was founded in 1868 by Pope Pius IX. as Vicariate Apostolic Colorado and Utah removed from the diocese of Santa Fe . After it had changed its name to Apostolic Vicariate Colorado in 1879, it was on August 16, 1887 by Leo XIII. founded under the name Denver as a diocese and subordinated to the ecclesiastical province of Santa Fe.

On November 15, 1941, the diocese of Pueblo was separated from it and Denver itself was raised to an archdiocese. As such, it is still a metropolitan diocese of the suffragan dioceses of Pueblo , Cheyenne and Colorado Springs . 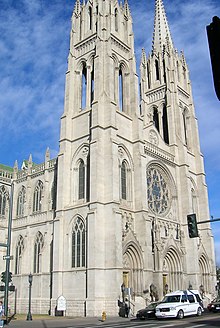 Archdioceses and Dioceses in the United States